The Non-Gambler’s Guide to Vegas

Vegas is synonymous with over-the-top glitz, one-armed bandits, and 24-hour buffets, and some people avoid it for these reasons, yet the land of plenty—and then some—is a chameleon, capable of flashing a different shade of neon for every taste and stripe. Vintage Vegas may have gone all-in with smoke-filled casinos and slinky showgirls, but modern Vegas is coming of age, recognizing that people go to the Glitter Gulch for more than just gaming and Eiffel Tower-sized margaritas—after all, it is the entertainment capital of the world. 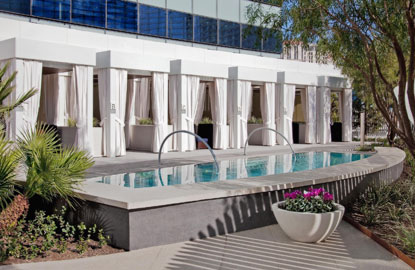 Where to Stay: Hotels are no longer just a place to crash with a handful of dice. Sans slots, a new breed of resort has commingled with Vegas’ signature entertainment to produce a non-gaming and non-smoking love child. We like:

A chic black and white striped herringbone-print wall fronted by oversized black planters is your first and lasting impression of Vdara. Inside, gather in the lobby and find the scene at third floor pool. The Vdara’s 1495 all-suite rooms boast a sitting area, efficiency kitchen, stand alone tub and WiFi.

As you’d expect, Trump’s signature, golden-touch design is not lost on his Vegas property, the Trump International Hotel Las Vegas. The 64-story condo hotel even has a glimmering exterior, and golden water fountains at the pool. Inside the clean and elegant design rivals the nicest hotels in Vegas. Bonus, its right beside the Fashion Show Mall.

Tall bamboo trees that rustle in the wind set the tone for a sleek and discreet stay at the Mandarin Oriental Las Vegas. To reach the sky lobby, take a seat on the elevator’s red velvet bench. On the 23rd floor, fresh-cut floral art and uniquely oriental styling make you want to stay perched above the desert landscape indefinitely.

Insider Tip: Most hotel pools on the Strip blast music, while the Trump and Mandarin Oriental opt for quieter tunes. 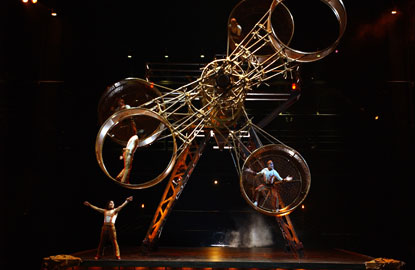 What to Do: Once you’ve recharged at your non-gaming hotel, it’s time to pound the pavement. Start early and get to know a side of Vegas many never see: the Strip at 6.30am. Running or walking along the surprisingly peaceful Las Vegas Boulevard in the morning has become a popular "must-do" for those who frequent Sin City for any reason other than partying.

Peer into Vegas’ storied past at the Neon Museum, where over 150 iconic, signs dating back to the early 1930’s rest in peace in the two-acre "Boneyard." During the warmer months, tours are at 10am Tuesday through Saturday by advanced appointment only. A suggested donation of $15 helps cover the cost of keeping the non-profit facility fabulous.

It started with a circus act in Montreal and years later an army of seven awe-inspiring and trapeze-flying Cirque Du Soleil shows have their big top tent poles firmly rooted in Vegas’ entertainment scene. We recommend O, an aquatic surrealism production combining Olympic-caliber sports and theatrics, or KA, a tale of two twins who explore the world through a mechanical stage that performs as many gravity-defying acrobatics as the 80 artists in the show.

In addition to non-gaming hotels and high-end circus acts, shopping malls and boutiques have taken up almost every available piece of real estate in and between hotels; some visitors just come for the sun and shopping alone. Pack light because every thinkable boutique from Alexander McQueen to Jimmy Choo has set up shop on and around the Strip. Want a deal? Venture off-Strip to the Las Vegas Premium Outlets North to exercise your credit card at shops like J.Crew, Ted Baker, and Theory.

A lifestyle movement has sprouted with non-gaming resorts and lifestyle entertainment that won’t leave you lamenting Sin City on the flight home. The new Vegas is whatever you make it—sunning at the pool or shopping at the only Manolo Blahnik outside of Manhattan. Lady luck has done it again, proving she’s still got it even without going out all night.

Insider Tip: Hungry? Don’t miss our recently published guide to the latest and greatest cuisine: Where to Eat In Vegas Now (And Soon).