Deals Leila Najafi Attention West Coast: You Can Now Book Flights to Paris for as Little as $321
Home  >  News   >   Fodor’s 7 New Wonders of the World

Fodor’s 7 New Wonders of the World

The Seven Wonders of the World were selected by one man, Philon of Byzantium, back in 200 B.C. His choices for all man-made monuments were terrific, but the known world is much bigger now and many of those monuments no longer exist. So Swiss explorer Bernard Weber decided to ask people around the globe to choose Seven New Wonders of the World. Voting began online back in 2000. Millions have now chosen their favorite monument from among the 21 finalists, and the results will be announced on July 7 (07/07/07). 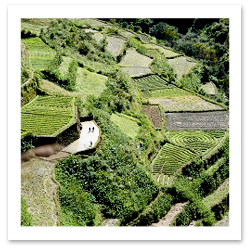 As the voting draws to a close some countries have gone into a bit of a competitive tizzy. The Associated Press reports that Brazil’s president was recently seen embracing Rio de Janeiro’s Christ the Redeemer statue after strongly urging citizens to vote for the effigy during his weekly radio show. India’s Tourism and Culture Minister Ambika Soni has issued an emotional plea begging people to vote for the Taj Mahal. Egypt had a bit of a snit when it heard that new wonders were being chosen, but they settled down after the Pyramid at Giza ended up with honorable mention on the new list.

Canadians, noticing that nothing from their country even made the list, came up with their own Seven Wonders of Canada (the winner is “The Sleeping Giant of Thunder Bay,” a very big rock that looks like someone snoozing). Inspired by our friends to the north, several Fodor’s editors and writers compiled their own list of New Seven Wonders. Here are our choices.

Banaue Rice Terraces, Banaue, Philippines
Cut by hand into a mountainside at least 2,000 years ago, the Banaue Rice Terraces wrap around a mountain and seem to touch the sky. The tallest terraces reach an altitude of almost 5,000 feet. Each terrace boasts innovative irrigation systems that divert nearby springs and streams. Visitors can wander the multitude of trails in the area, but if you venture here be prepared for scads of tourist shops near the best viewpoints. One of the best times to see the terraces is at sunrise, when light flows over the mountain like gold water. (photo, above right)

Palenque, Chiapas, Mexico
Wrapped in mists and cradled in lushly wooded hills, this ruined city of the Mayans is one of the most beautiful archaeological sites in the world. First discovered by Europeans in 1773, it was forgotten and found and then forgotten again until 1840, when explorers John Lloyd Stephens and Frederick Catherwood carefully documented its towers, pyramids and temples. Among the wonders is the astronomical observatory. On the Winter Solstice, the observatory tower provides a perfect view of the sun setting directly over the Temple of the Inscriptions. 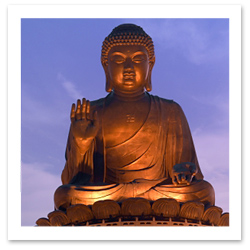 Within the Po Lin Monastery, in Lantau’s mountainous interior, is one of the world’s tallest outdoor bronze statues of Buddha, the Tian Tan Buddha, measuring more than 100 feet high and weighing more than 275 tons. It’s so large it can be seen from Macau on a clear day. The statue is all the more impressive for its location at the peak of a hill, which essentially forces pilgrims to stare up at it as they ascend. Construction on Tian Tin Buddha began in 1990 and was completed in 1993, on the birthday of Sakyamuni, one of the most revered of all Buddhist prophets.

Palm Islands, Dubai, United Arab Emirates
These are the world’s biggest manmade islands, composed mostly of rocks and sand dredged up from the bottom of the Arabian Gulf. Isn’t it amazing what you can do with $15 billion? The Palms development will be home to dozens of luxury hotels and private villas, along with the requisite shopping centers, spas, restaurants, cinemas, and water theme parks. Environmentalists are crowing, but developers insist that all is well. Developers Al Nakheel Properties have already humbly declared it the Eighth Wonder of the World.

The Panama Canal, Panama, Central America
The Canal links the Pacific and the Atlantic Oceans, and cut the standard miles of a typical voyage from New York to San Francisco by more than half. The mammoth effort that went into the construction of the canal boggles the mind. Construction began in 1880 under the French, who abandoned the project in 1893. America, under the leadership of Teddy Roosevelt, picked up the project in 1904 and the Canal opened in 1914 — one year ahead of schedule. Thousands of workers lost their lives during construction, felled by landslides, malaria and other horrors. Some ships are now too big to traverse the canal, but it remains a busy shipping lane and a true testament to human ingenuity. 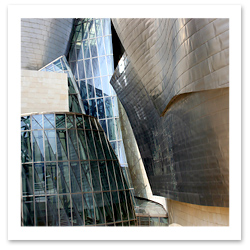 The Guggenheim Bilbao is pure eye candy, rough limestone blocks are interspersed with titanium-covered curves, meandering walkways are suspended from the interior roof, and gently rounded plaster walls slip seamlessly into steel frameworks interspaced with huge curtains of glass. Somehow from street level, the 24,000-square-meter building manages to mesh with the far less-festive architecture of Bilbao, now a bustling tourist center due to the museum. (photo, right)

Walt Disney World, Orlando, Florida
Walt Disney World is much more than a theme park — it’s an entire world within a world, not to mention one of the most popular tourist draws in the entire world. When the Disney Company decided to turn a huge tract of swampland outside Orlando into a theme park, who could have envisioned that they’d be able to create such a fully-imagined world, with its own transportation system, elaborately conceived hotels, and meticulously planned and executed theme parks? It’s as if someone decided to build a new Paris out in the middle of the Everglades.