News Apeksha Bhateja What Are the Chances You'll Get Monkeypox at a Hotel?
NewsTop 5 New U.S. Hotels

New hotels are a dime a dozen in big cities like New York (hello, hotel boom), Miami (expect at least 10 openings here in 2012), and Los Angeles (a handful of newbies are on our radar, and the recently reopened Hotel Bel-Air just garnered a place on Fodor’s 2011 Hotel Awards). So, we’ve done some inspecting and narrowed down the list. Herewith, five of our recent favorites, many of which offer value rates, to boot. 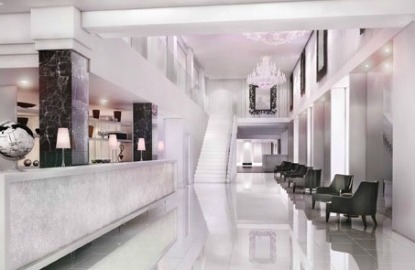 
Miami’s beachfront deco landmark just underwent a two-year long, $20 million renovation, and kicked off its reopening with a party-packed week of Art Basel fêtes. Sticking with its 1940s roots, the new Shelborne exudes a glamorous retro vibe. The lobby sparkles with crystal chandeliers and white lacquered furnishings, while the oceanfront pool features a catwalk connecting the bi-level pool deck.

What to Know: Not all rooms here have been renovated (in fact, it seems only a handful rock the glam look) so be sure to specify your preference when booking. A super low $159 promo rate is available in older units.

The Kicker: Get an artsy pop culture fix with your overnight stay. The "Art of Night" exhibition just debuted with the hotel reopening and features photography of behind-the-scenes celebrity shenanigans (subjects include Dennis Hopper, Jay Z, Michael Jackson, and more) taken by nightlife photographer Seth Browarnik. 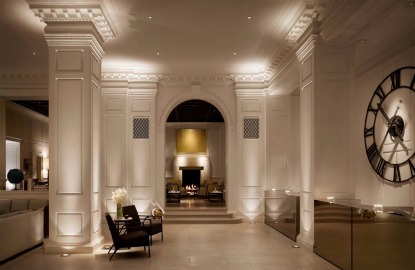 
Master hotelier Ian Schrager redefines his style at his latest concept hotel (formerly Ambassador East), the debut property of the PUBLIC brand. Don’t expect the typical frills and Starck flash. Instead, prepare yourself for simple, chic design and personalized service—at a very reasonable price tag. Needless to say, no place of Schrager’s ever really lacks pizzazz, and the public spaces do indeed wow. The columned lobby alone houses a massive sculpture of hanging crystals, a Christian Liaigre table (with a bevy of MacBooks atop it, available to guests), and a huge "Benjamin Button" clock, dubbed so because the minute hand moves backwards.

What to Know: The remade Pump Room, legendary stomping ground of Marilyn Monroe and Humphrey Bogart, is hot again, thanks to a fresh menu of farm-to-table tapas, courtesy of chef Jean-Georges Vongerichten—all for less than $30, mind you!

The Kicker: Preview rates start from $135 and are valid all the way through March. 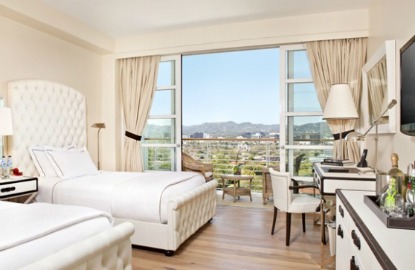 
Okay, so Mr. C has been holding court for nearly six months, but he’s not exactly old news. How can we ignore the fashionable newcomer, what with the first west coast Cipriani’s restaurant and his handsome vintage-modern rooms? We can’t. We dig the faux trunk tables and desks, the private balconies overlooking Los Angeles, the cabana-lined pool, and the fabulous dining.

What to Know: Stay three nights or more and save 25% off standard nightly rates (from $275) or splurge on a suite and save 50%.

The Kicker: Hotel guests are privy to the Cipriani kitchen all day and night, thanks to 24-hour room service. That means baked tagliolini at 3 a.m., should you crave it. 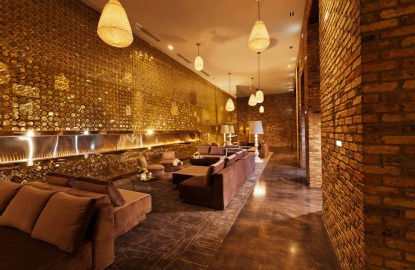 
The first Radisson Blu in North America is housed in Chicago’s newest skyscraper, an eye-catching 81-story stunner with a wave-like edifice. Occupying the first 18 floors of the building, interiors feature equally dramatic design: The lobby has a 50-foot long fireplace, a cantilevered "flying staircase," and brick pillars lined with backlit glass blocks. The 334 rooms (from $194) feature two different design schemes (we gravitate towards the contemporary "Naturally Cool" rooms versus the clubby "Mansion House" units). Even in the winter, there’s plenty of attractions on site, from the indoor lap pool and fitness center (with a basketball court!) to the swanky bar and Italian eatery Filini.

What to Know: It’s more of an interesting tidbit but the Radisson’s Aqua Tower is the tallest in the country designed by a female architect.

The Kicker: Many of the rooms come with balconies overlooking Millennium Park. Be sure to request one. 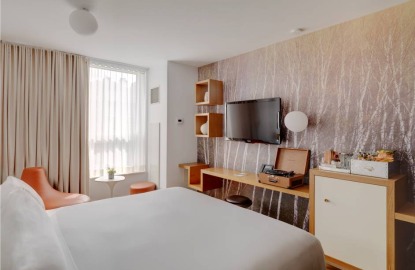 
This much anticipated, much delayed Brooklyn newbie (we expected its opening back in June) is located in happening Williamsburg, just a 10-minute subway ride from Union Square. The 64-room, full-service Hotel Williamsburg features rooms with modern styling and hip amenities like turntables. The hotel also has an enclosed rooftop lounge and restaurant, aptly named the Watering Tower, with killer city views. Many of the rooms also overlook Manhattan or McCarren Park.

What to Know: We think rates (from $295) are a tad pricey for the borough.

The Kicker: The coolest part about the hotel is its Swim Club, an outdoor pool and cabana lounge (too bad we’ll have to wait until summer 2012 to experience it).

Start planning your trip with our guides to Miami Beach, Chicago, Los Angeles, and New York. We cover the top restaurants, best shops, and sights you can’t miss!