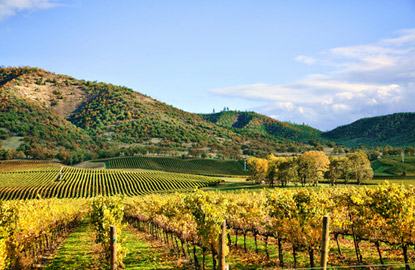 Less than 40 miles of the vineyard-flanked St. Helena Highway separates the city of Napa, near the foot of the Napa Valley, from Calistoga, the town at the top. These two enclaves are as different as the wines they produce—chalky ground in the cooler south produces earthy tones, while hard, volcanic soil up in the narrow, heat-trapping north brings forth fruitier characteristics—but both embody with equal aplomb the Valley’s patented brand of laid-back luxury.

This small stretch of varied and now iconic land in Northern California is worth infinite repeat visits, if for no other reason than to master the art of experiencing all it has to offer. Napa and Calistoga stand at each end, with the charming towns of Rutherford, St. Helena, and Yountville in between.

Here’s our insider’s guide to all of the mouthwatering, idyllic places and moments that come so easily in that part of the world.

Where to Stay: Five years ago, Jim Gunther and Jamie Cherry were working in San Fran’s software industry. Now they run Napa’s chicest bed-and-breakfast, the Inn on First (rates from $199/night). Instead of fusty furniture and musty drapes, you’ll find fresh flowers, French doors, and spa-like bathrooms in the original mansion and suites annex; the two buildings are linked by the Inn’s vivid garden, a boutique ecosystem home to local birds, pygmy lizards and Jamie and Jim’s three miniature Schnauzers. 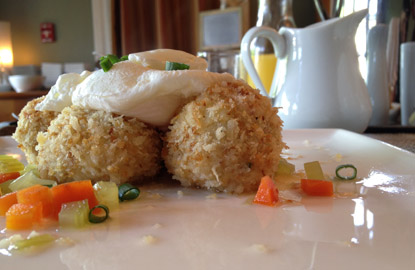 Mornings begin with house-made granola, pastries, winery gossip, and restaurant recommendations at the communal, reclaimed-wood dining table, followed by a plated entree that changes daily. "[Jim] has 110 breakfast recipes," Jaime told me over sunny eggs ringed with porky tomato gravy and sunk into soft polenta. "Most B&Bs have six."

Where to Eat: Burgers, mint-chip malts, and bangle-bracelet onions rings—with a conscious? Easy to see why locals flock to Gott’s Roadside, an indoor/outdoor throwback shake shack as red and white as a ketchup bottle. The original Gott&rsquos;s in St. Helena (nee Taylor’s Refresher) has a garden that supplies three nearby locations.

At Oenotri, chefs Tyler Rodde and Curtis DiFede make ethereal pizzas between gnocchi- and sausage-making classes and douse their strozzapreti pasta in olive oil form Rodde’s parents’ farm. You’ll fall for the wine list, compiled by the osteria’s French Laundry-bred sommelier, and how a foamy, off-dry Moscato/Brachetto blend sparred with the brash acidity of the Margherita pizza’s swirls of crushed raw tomatoes.

Where to Oggle: The grounds are stunning, and the wines (especially the Allomi Cab, full of vanilla innuendo) refined, but modern art at The Hess Collection is reason enough to ascend winding Redwood Road to this eco-conscious mountaintop winery.

Where to Stay: When an early evening chill creeps down the Palisades Mountains that frame Calistoga, there is nowhere better to be than a bubbling, 102-degree, outdoor hot tub. Solage, Auberge du Soleil’s low-fi-luxury little sister (rates from $325), knows this. Banks of sliding glass walls link the freestanding Capella Studio cottages to private backyards furnished with sunken Jacuzzis, thatched willow-vine canopies, loungers, and lawns. 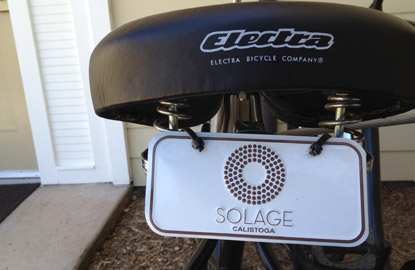 After a dip, head to the resort’s Michelin-starred restaurant, Solbar, on one of the black-and-chrome Electra cruisers waiting outside each studio. Under the barn-like ceilings, chef Brandon Sharp serves up alter-ego menus: one side indulgent (braised lamb shoulder with ‘stolen’ mustard flowers), the other light (lemongrass steamed snapper).

Don’t sleep on the lighthearted wine list, "geared toward winemakers who come in on a Tuesday and want something cool and fun and don’t have a lot of money to spend," according to enthusiastic, New York-bred sommelier Bradley Wasserman. Organized by categories like The Hot Sheet (staff recommendations) and A Stone’s Throw ("with a Nerf Turbo and a tailwind, I could hit these places from here"), Wasserman’s list, like Solage itself, leaves the stuffiness at home.

Where to Eat: Flowered plastic cloths cover the tables and dollar-store pinwheels spin in the planters at no-frills Puerto Vallarta, a cantina hidden behind an ice cream shop on Lincoln. Tumblers of icy horchata and big-mouth chili verde burritos taste even better en plein air, so snare a seat in the umbrella-shaded alley alongside a bamboo fence veined with grapevines.

Where to Sip: Yes, gawking tourists patrol the parapets and shuffle through the loggias of Castello di Amorosa. And yes, the mere mention of this castle-cum-winery might earn you a local’s scoff (it earned me two). But there is something undeniably impressive about the scale of the place—121,000 square feet across eight levels—and the method in which owner Dario Sattui (the fittest 71-year-old alive) built it, bringing over materials and artisans from Europe over the course of 13 years. The 45-minute tour finishes with a subterranean tasting in the cool, rock-hewn cellars; it’s worth the extra $10 for a sip of Amorosa’s Il Passito, a lush, limited-production late-harvest Semillon. (Tours and tastings from $33)

And Everywhere in Between…

Where (Else) to Sleep: Up in the verdant hills of Rutherford, California’s well-heeled condors slumber at Auberge du Soleil (rates from $750), the Valley’s luxury benchmark for 27 years. Well-placed mirrors, vaulted ceilings, and carved-out nooks create the illusion of space in the cozy cottages carved into the hills. In one Hillside Suite, twin sets of tall, skinny French doors lead onto a terrace with views down the Valley’s plunging green neckline—the perfect nightcap setting after a smoothly orchestrated dinner at the Michelin-starred restaurant. Go for the five-course tasting, and keep fingers crossed that chef Robert Curry is serving his creamy pink shrimp risotto with yuzu and mint.

Where (Else) to Sip: Started by a Frenchman who came to California to get rich in the American gold rush and stayed to make Bourdeaux-style wines for the miners, Markham Vineyards has been crushing grapes under various names since the 1800s. The five-pour Rock and Roll Tasting at their sun-washed St. Helena visitor center pays homage to Rolling Stone photographer Baron Wolman, a longtime buddy of Markham pres, Bryan Del Biondo. Through December 2012, vintage Stone covers and Wolman’s candid photos that inspired them are hanging at Markham. Pay respects to Tina Turner and Joni Mitchell before grabbing a bottle of the crystal, unoaked Chardonnay. (Tastings from $15. Wolman exhibit free to the public.) 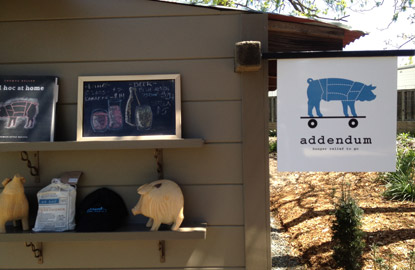 From the former, Addendum could easily be mistaken for another Valley guest house were it not for the "Fried Chicken" and "BBQ" chalkboards out front. That’s all this haute hut serves (sweet, cakey cornbread and seasonal fixin’s included in the $16 tag), 11 a.m. through 2 p.m., Thursday through Sunday only, to disciples that occupy the evergreen-shaded picnic tables.

Down the street, Redd Wood does blistered pizza, interesting pasta, and antipasti in the lobby of the North Block Hotel. Order the cheese-and-salumi board, a $25 steal accessorized with pickled ramps, and hope Reddington’s in the mood to share his ‘nduja, a fatty, fiery, spreadable Calabrese pork sausage. 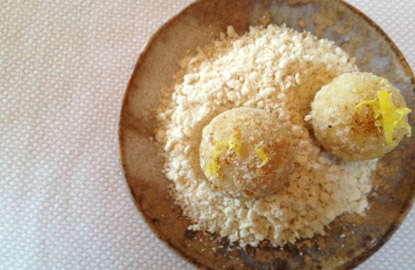 Yogurt custard with shredded shiso and sweet black sesame "rocks." Saltine-encrusted spheres cradling with molten geoduck clam chowder. Ephemeral frozen lemon-gin meringues that vanish in the mouth like breath in the winter. These and a dozen more witty, joyful courses punctuate dinners at the three Michelin-starred restaurant at Meadowood, fresh off a three-month renovation. Valley insiders whisper Meadowood is better than fine-dining icon French Laundry; at $225 per tasting, it’s $50 cheaper, too, and the faultless, disarmingly friendly staff won’t sneer if you wear jeans.

Insider Tip: Meadowood chef Christopher Kostow landed a gleaming, state-of-the-art kitchen with the recent renovations, and the staff will be happy to show you around after dinner, just ask.

Another Insider Tip: In Yountville, the soothing spa at Villagio is so luxe even the wood Q-tips feel like an indulgence. Here, only the best will do, a philosophy that extends to an ace staff that goes the proverbial extra mile, be it spending ten more minutes on a particularly obstinate knot or fetching watermelon-mint aguas frescas post-treatment (massages from $125). Don’t leave without stopping at the spa’s Scrub Bar, where guests can build their own salt or sugar exfoliant with lemongrass, rose petals, eucalyptus, and other aromatics.

Bonus Insider Tip: Ask about upgrading to one of Villagio’s five Spa Suites. A mere $50 relocates your treatment to a private sanctuary furnished with steam shower, fireplace, and three sunken tubs—one inside, two on the private outdoor terrace.

Thinking of a trip to California?

For up-to-the-minute hotel and restaurant recommendations, as well as the best planning advice, check out our California Travel Guide.