Beaches Kaila Yu Do You Enjoy Visiting Hawaii? You Should Pay a Fee
Home  >  News   >   Just Back from Karlovy Vary

Just Back from Karlovy Vary

The City of a Hundred Spires, the Heart of Europe, the Golden City — Prague has many nicknames, which is no surprise considering its reputation as a must-see European destination. But Prague hogs the spotlight from the rest of the Czech Republic, which lingers in the background largely unknown to visitors.

This wasn’t always the case. The spa towns in the west of the Czech Republic were once aristocratic playgrounds, with alluring natural hot springs. A historical Who’s Who once came to “take the cure,” including Beethoven, Goethe, and Peter the Great. On a recent trip to the Czech Republic, I drove west to see one of these towns, Karlovy Vary, in the midst of a comeback, undimmed by years of communist neglect, and courting a new aristocracy — international film stars.

Karlovy Vary, Ready for Its Close Up

The town of Karlovy Vary (also known by its German name, Carlsbad, 79 miles west of Prague) is scooped out of a forest with a “Hans Christian Andersen” vibe. It has all the charms of Prague, but on a smaller scale. Streets are laced with baroque buildings (see photo, right) in pastel Baskin ‘n’ Robbins colors, and the slender Teplá river divides the town. When I arrived, it was wet and gray, but umbrellas parading over the town’s footbridges only added to the town’s charms. 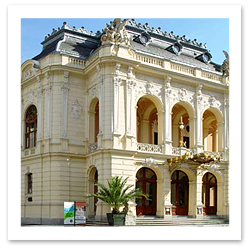 I stayed in the Carlsbad Plaza Hotel. As soon as I crossed into the lobby, the devotion to spa culture was evident. A small drinking fountain there gave guests a direct line to the mineral springs. My room was a marriage of tasteful antique reproductions and in-room Internet, but I spent only my sleeping hours there.

I was eager to see another hotel in the area, the famous Grandhotel Pupp, just steps from my hotel. The Pupp, built with the fortunes of a former confectioner, fittingly resembles an enormous baroque petit four. Like most local businesses, the Pupp experienced a dark chapter after World War II when it became a state possession and was renamed the “Grandhotel Moskva,” meaning “Moscow.” The original name was restored when the hotel was re-privatized in 1991.

None of this previous strife was apparent when I had tea there. The central dining room is a glided music box with twinkling chandeliers. The whole experience was positively cinematic, and left me daydreaming about jet-setting romances. I’m not the only one who has swooned over this hotel. In the latest James Bond movie, Casino Royale, Bond and his paramour pretend to be high-rolling gamblers in the hotel, a marvelous setting for sipping a martini while playing a straight flush.

No one can come to Karlovy Vary without trying some spa treatments. Spa culture in the Czech Republic has sort of a split personality. On the one hand, there’s a strict, medicinal attitude toward procedures. On the other, a more Hollywood attitude of pampering for pampering sake has asserted itself. I chose Zámecké Lázne because the treatments are a mix of old guard and new wave. Eager to do a “taste test,” I tried one of each.

The “pearl bath” (14 euros) is definitely of the pampering variety, sort of a Jacuzzi soak crossed with a laser light show. In a private bath, various jets pulsate on tempo while colored lights tint the water into a rainbow of hews. It was a bit psychedelic, but left me mellow and humming “Come on Get Happy.” The second treatment (13 euros) was strictly old school: I was propped in a poolside chair, attached to a respirator to breathe pure oxygen. I couldn’t shake the feeling that I was an extra on Grey’s Anatomy, but then the oxygen worked its magic and I fell into a dark dreamless thirty-minute nap. 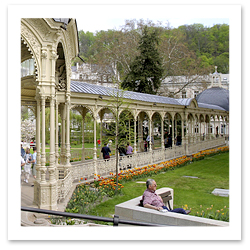 Happily, some health remedies here are free, including the hot springs. Several are housed in the town’s colonnade, along the street Vrídelní ul. Curious visitors skipped from fountain to fountain with cups in hand, but once they took a sip, they usually exclaimed the well-known lingua franca for distaste — “Yuck!” These sulfuric waters are definitely an acquired taste.

Those looking for tastier waters follow locals to the “thirteenth spring,” Becherovka. Truthfully, this isn’t a spring, it’s a locally produced herb liqueur, but the nickname comes from the fact that Czechs believe it’s medicinal.

Karlovy Vary is bursting with places to buy the drink. There’s even a stand in the center of town shaped like a bottle of Becherovka. But I went to the source — the Jan Becher Museum, just outside the heart of town at T.G. Masaryka 57.

A tour of the museum circles through the cellar and finishes in the tasting room, where varieties of Becherovka are sampled. I knocked back a cup of the “sweet” variety, a strong, warming brew that was suspended in a thick ribbon of honey. The tour guide proudly told me that both Michael Douglas and Sophia Loren raised a cup here.

As I wandered back through the center of town passing baroque buildings with ornate curlicues, it was impossible to ignore the plain gray architecture of the Hotel Thermal, sticking out like a concrete thumb. A hotel built during the communist era, the Thermal resembles a parking garage. But despite its forbidding appearance, this spot plays host to the Karlovy Vary Film Festival and is flooded annually with international film stars. Last year, Tom Wilkinson and Andy Garcia mixed with European stars, making it the Hollywood stop for Central Europe. 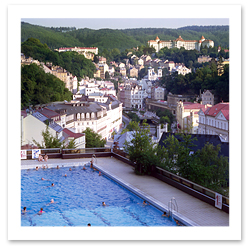 If the Thermal’s charm isn’t altogether apparent outside, it certainly is inside. The lobby has the type of open space unknown in older buildings — perfect for grand entrances. Several screening rooms in beige wood showed films in a lofty setting. But the ultimate selling point is the amazing view from the rooftop pool, which gives one the sensation of floating above town in a hot-air balloon. I could almost picture the Thermal Hotel saying, “Tinseltown, eat your heart out.”

Czech Airlines has daily nonstop flights from New York to Prague (flying time is 8 hours). Tickets are on average $850 with taxes during mid-season (March through August). The drive to Karlovy Vary is two hours from Prague. Buses frequently depart from Prague to Karlovy Vary from Florenc station in Prague; tickets cost 120 Kc. The train is not recommended as tickets are double the price and the trip tends to be an hour longer. Rooms in the Carlsbad Plaza Hotel range from 120-490 euros per night