Notes From a Weekend in Brittany 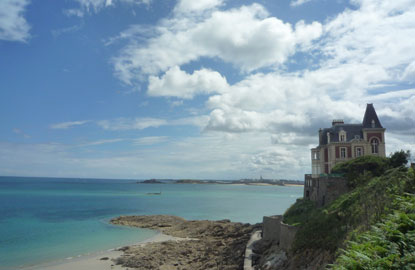 On our latest weekend away, we discovered the best (er, worst?) plaice to sit in a restaurant. No, that is not misspelled (a plaice is a type of fish). It’s a pun, which will make sense before we’re done. But first some back-story from France’s beautiful backwater, Brittany.

Monsieur and I recently spent a weekend in Brittany attending a friend’s wedding. As much as we’ve always wanted to visit, we needed this wedding to kick us into gear because getting to this windswept corner of western France is a bit of a schlep: The special bits are about a 4 hour drive from Paris (and not that much quicker by train). That being said, the special bits are truly wonderful, with legendary locations like St.Malo, Combourg, and Mount St Michel among them.

Our destination was Dinard, a coastal town with an illustrious history as a Belle Epoque resort for affluent Brits (yes, Brits) who were attracted to the clear-water beaches and mild microclimate of the aptly named Cote Emeraulde.

Three hours into our drive to Dinard, the fields along the highway gave way to a distant coastal view, punctuated by a golden spire jutting majestically from the sea. Sorry for peppering this post with such frilly language (tend to prefer stupid fish puns, as I do) but that golden spire was Mount St Michel, and catching sight of it like that—literally out of the blue—was nothing short of poetic. 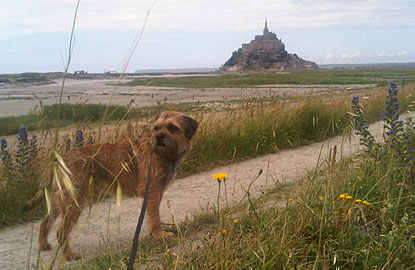 I won’t bore you with details of Mount Saint Michel’s fortified monastery, mainly because I can’t—we had our border terrier, Archie Lewoof, with us and the monks have a strict No Dogs Allowed policy (go figure).

What I will tell you is that if you ever go to Mount Saint Michel, make sure you eat an omelette at La Mere Poulard. They’re not omelettes so much as egg-asmic masterpieces which have been whipped to frenzy in huge copper bowls by costume-clad kitchen hands and cooked to fluffy perfection over an open fire. All eggs should be so lucky.

But that’s all back-story: La Mere Poulard is a red herring, here. The fishy seating arrangement was served once we’d arrived in Dinard.

When asked to recommend a good but casual local restaurant, Thierry, the amazingly helpful concierge at Le Grand Hotel Barriere in Dinard, sent us to La Gonelle, a short stroll along a coastal path, renowned for its fresh seafood. When we got there, I decided to sit facing the open kitchen with my back to the sea, giving Monsieur the bay view that he deserved after his long day at the wheel. Both of our seats provided us with an eyeful of the restaurant’s large seafood tanks which were right next to us, teeming with lobster, spider crab, and so many species of shellfish that you’d need Jacques Cousteau as a dining companion to figure them out. And, hulking over all that crustacea, was an enormous fish tank filled with… fish. 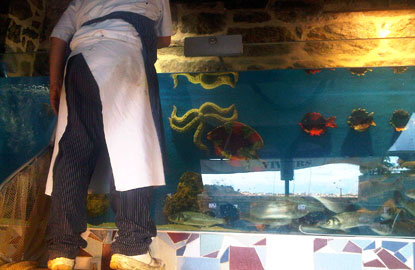 I’ll admit that I can be a bit slow on the uptake sometimes, or perhaps I’m just subconsciously unwilling to assimilate information that I’d rather not know. Because it was only when I opened the menu that I realised that the sole, sea bass, and turbot that had been entertaining us with their sweeps and dives while we sipped our aperitifs were, in fact, the catch of the day.

The table next to us got their order in first—a large sole to be shared by two couples. And with that instruction the chef climbed onto the skinny board that straddled the lobster tank and scooped up a large flatfish from the bottom of the fish tank with his net. The sole was placed in a tray, presented to the neighbouring table, declared to be the perfect size, and returned to kitchen where the chef smacked its head with a mallet and proceeded to clean and gut a dinner for four, right before my very eyes.

We guiltily dealt a similar fate to a sea bass, although instead of receiving a buttery meuniere committal, ours was given a lighter send-off in a steaming vanilla-scented papillotte.

By the end of the evening I’d witnessed more fish batterings than I care to recall, even though I found myself transfixed by the chef and the whole deadly but delicious process. The food was fantastic and the fish was, well, undeniably fresh. But lesson learned about the best plaice to sit. Next time I’ll take the bay view and pretend that fresh fish comes from the market.