The Best of Glasgow Lodging 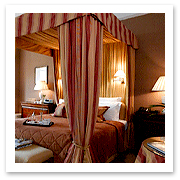 Central Glasgow never really goes to sleep, so downtown hotels are noisier than those in the genteel West End, convenient for museums and art galleries, or southern suburbs. The flip side is that most downtown hotels are within walking distance of all the main sights.

One Devonshire Gardens
Elegance is the theme, from the sophisticated drawing room to the sumptuous guest rooms with flowing draperies and traditional mahogany furnishings; 10 of the rooms have four-poster beds. The No. 5 restaurant is equally stylish, with a menu that changes each month. Expect such delights as grilled gravlax of salmon with fennel followed by warm cherries with a chocolate brownie. $$$-$$$$$

Bewley’s
With an emphasis on convenience and practicality, Bewley’s has simple, modern appeal: no frills, just clean-cut comfort. If the hotel doesn’t have the facilities you need, the staff can often help you out: the hotel has an affiliation, for example, with a neighboring fitness center that charges hotel guests just £8 per session. $

Langs
This hotel’s minimalist look extends from the sleek wood reception desk to the sophisticated platform beds in the bright bedrooms. The suites on the top floor come in three “flavors,” ranging from “monochrome” to “pop art.” Contemporary Scottish cooking is the forte of the Aurora restaurant, while the Oshi restaurant serves excellent Japanese food, including three-course pre- and post-theater meals. $$-$$$

Manor Park Hotel
On a quiet street close to idyllice Victoria Park, this stately terraced town house combines urban spaciousness with proximity to city action. Each of the neat and airy bedrooms, even the bright attic ones, bears the name in Gaelic of a Scottish island. The friendly owners themselves are Gaelic speakers, and tartan plays its part subtly in the homey interior. $-$$ 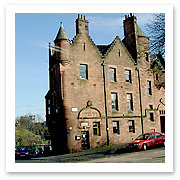 Cathedral House Hotel
Adjacent to Glasgow Cathedral, this Scottish Baronial-style building once served as the church’s ecclesiastical headquarters—hence the name. It’s suitably grand, with crow-stepped gables and towering turrets. The rooms, accessed by a spiraling stone staircase, are of varying size, but all are smartly decorated with dark-wood furnishings. $-$$

Radisson SAS
You can’t miss this eye-catching edifice behind Central Station in the city’s up-and-coming financial quarter. Its glass front makes the interior, particularly the lounge, seem as though it were part of the street. Rooms are decorated in several styles—the Nordic rooms, for example, are done up in an icy shade of blue. $$$$-$$$$$