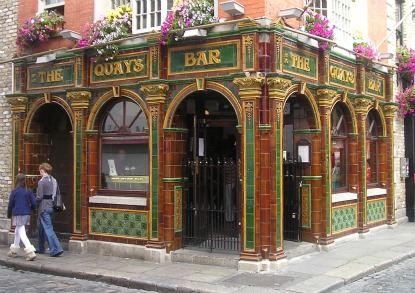 It’s impossible to think of Dublin without also thinking of its 1,000 or so "public houses." These are what give Dublin so much of its character, and they’re largely to blame for the fierce loyalty Dublin inspires among locals and visitors. It was hard research, but here are our favorite 6 pubs in Dublin.

As a general rule, the area between Grafton and Great George’s streets is a gold mine for classy pubs. Another good bet is the Temple Bar district (though some of the newer ones are all plastic and mirrors). And if it’s real spit-on-the-floor hideaways you’re after, head across the Liffey to the areas around Parnell Square or Smithfield. But beware the tourist-trap faux traditional pubs where you can hardly hear the music for the roar of the seven flat-screen TVs blaring out soccer games

Grogans, also known as the Castle Lounge, is a small place packed with creative folk. Owner Tommy Grogan is known as a patron of local artists . . . Read more.

Horseshoe Bar was recently given a massive face-lift along with the rest of the Shelbourne hotel and is now the hottest ticket in town. Long a . . . Read more.

Library Bar is the place to go when you’re ready to get away from all the madness. The book-lined shelves, big armchairs and sofas, and blazing . . . Read more.

One Fade Street is not actually the name of this very cool new bar, but it’s the best available because the place considers itself too hip to even . . . Read more.

Ryan’s Pub is one of Dublin’s last genuine, late-Victorian-era pubs, and has changed little since its last (1896) remodeling . . . Read more.

Stag’s Head dates from 1770 and was rebuilt in 1895. Theater people from the nearby Olympia, journalists, and Trinity students gather around . . . Read more.