News Larry Bleiberg You Can Finally Look Inside This Stunning D.C. Landmark. But Only for Another 25 Days
Home  >  News   >   5 Places to Travel with Your Tax Refund

5 Places to Travel with Your Tax Refund 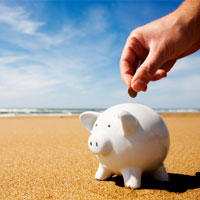 According to a recent article in USA Today, tax refunds are up more than 10% over last year (an average payment of over $3,000 per family); the increase comes partly as a result of tax credits in the economic stimulus bill passed in 2009. So a lot of people are receiving some unexpected cash flow, and it couldn’t come at a better time. According to Travelocity, 49% of North Americans plan to increase their travel in the year ahead, compared to 21% just six months ago. For those people who have not been able to travel recently, this is the ideal season, particularly if you are looking at warm-weather destinations, most of which are entering their low seasons just as refund payments are arriving in bank accounts. But if you can find a decent airfare, it’s also a good time to go to Europe since the Euro has been falling against the dollar for the past few months because of the economic crisis in Greece.

So let’s say you’re that family of four with an average size refund of $3,000. Where can you go?

1. The Dominican Republic. Almost always the cheapest destination in the Caribbean, a family of four can travel here for a bargain price. Expedia shows prices at all-inclusive resorts in Puerto Plata (leaving from New York City) for $1,900 to $2,500 for a 4-night stay. That even leaves a little extra for paid excursions and T-shirts.

3. Walt Disney World. If you can wait until June, there are some good deals on Walt Disney World travel. In early June, Travelocity shows prices for airfare and accommodations for as little as $1,750; tickets to Disney World, however, do not come cheap and add another $1,000 onto the cost. But you still have a trip for under $3,000 (albeit before food costs).

4. Hawaii. If you live on the west coast, Pleasant Holidays offers some 4-night packages to Honolulu in mid-June (from Los Angeles) for as little as $2,600 for a family of four. Now that’s without a car or meals, so you’ll obviously pay more than $3,000, but Hawaii can be a good value for those wanting something a bit more exotic and willing to pay a bit more.

5. Ireland. For those willing to stretch their budget and fly on a moment’s notice (i.e., before Memorial Day), Go-Today.com is selling bargain-priced air/hotel packages to Dublin for a total of $3,300 for 4 nights (this offer includes 1 adult and 1 child in each of 2 rooms; 2 kids don’t fit in these Europe-size hotel rooms). That’s not a cheap trip, but it’s considerably less than travel later this summer.

Prices can be higher around Memorial Day and other holiday weekends, and it’s usually cheaper to travel on Tuesday or Wednesday and return Saturday.

1. Stay off the beach. If you’re heading to a warm-weather vacation destination and aren’t dead-set on beachfront accommodations, you may find something that’s waterfront (but not on a beach) is much more affordable. On an island where good hotels aren’t always on the best beaches (St. Maarten or St. Croix, for example), this can be a good strategy, especially if you’re renting a car anyway. And if you’re willing to walk 5 minutes to get to the beach (less than you have to walk at some of the larger all-inclusive resorts), you can save about 1/3 off the price of a beachfront resort right off the bat.

2. Travel on a whim. If you are someone who can take advantage of last-minute deals, keep checking on the various travel sites to see the most updated deals. Happily, the prices of flights to leisure destinations don’t always jump up as dramatically close to departure as they do for business-oriented destinations. Use a travel aggregator site like Kayak.com or Booking Buddy.com to help forecast and track airfare costs.

3. Book a package. If you are going to a resort destination in the spring or summer, always price an air-hotel package as well as pricing each element separately; often, you’ll save significantly on low-season hotel and air rates by booking a package. (And some of the best last-minute deals will be on packages.) Good sources for deals include packages like CheapCaribbean.com and AppleVacations.com, as well as the big online travel agents Expedia, Travelocity, and Orbitz.

4. Ask for discounts. When you make reservations, try calling a hotel directly to ask for the best available rate. Even at a large chain property, you might be surprised how just asking for a better deal can actually knock more than a couple of dollars off your rate. This is especially true if the hotel isn’t running at full occupancy, not an uncommon occurrence in the off-season.

5. Pack light. Since checked bags now cost extra on almost every flight in the U.S., Mexico, and Caribbean, you can save a lot of money by carrying your bags on the plane. This does mean you’ll need to buy sunscreen in 3-ounce containers and limit the amount of liquids and clothing you carry with you, but a small sacrifice can result in a $200 savings for a family of four—that’s real money.