News Annette Richmond Meet the Activists Reshaping the Travel Industry for the Better
Home  >  News   >   Cemeteries and Crypts: 4 City Sights to Die For

Cemeteries and Crypts: 4 City Sights to Die For

Walking around where most of the locals are dead might not be at the top of your sightseeing list, but it should be.

Wherever my travels take me, I enjoy seeking out and exploring my destination’s famous cemeteries. The experience can be akin to visiting an open-air museum of a city’s—or even a country’s—history. The bits of history on (and underneath!) the gravestones, the design and architecture of the monuments, and the quiet peacefulness of these places make them excellent alternatives to the bustling museums. Besides… who doesn’t like a little scare once in a while? 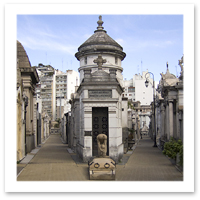 The architectural variety of the mausoleums is remarkable, and their neglected state will surely creep you out. I admit that my travel buddy and I actually ran out of a dead end filled with smashed glass, doors askew, and unkempt crypts. Most of Recoleta’s residents are in crypts instead of graves, so it’s possible to peek in and see coffins bunked on slabs. These neglected graves are usually sandwiched between a shiny, ornate Art Deco or Nouveau-style marble monstrosity and an ancient-looking but impeccable neoclassical stone monument.

Several of the mausoleums in Recoleta have interesting (and often sad) stories. Nineteen-year-old Rufina Cambaceres awoke in her coffin after being interred alive, having suffered a cataleptic attack. She died trying to claw her way out of the coffin, which her guilt-ridden family then upgraded. There’s also caudillo (dictator) Facundo Quiroga, buried standing up; Luis Ángel Firpo, a boxer who beat Joe Louis and who guards his own mausoleum garbed comfortably in his fighting robe; and of course the most popular resident, Eva Perón, who came to rest here after years of controversy and political wrangling.

In April of 2009 former President Raúl Alfonsín passed away and was interred in Recoleta in the pantheon to the heroes of the 1890 Revolution. The cemetery is also home to many very alive cats.

Fodor’s online guide to Recoleta
From the Forums: WillTravel’s April 2009 trip to Buenos Aires
“The famous cemetery, with its mausoleums in numerous architectural styles, has to be seen to be believed…” 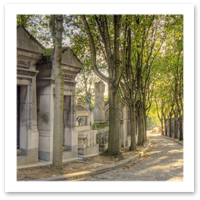 Napoleon Bonaparte established Cimitière du Père-Lachaise in 1804. Officially named “cimetière de l’Est,” Père-Lachaise is allegedly the world’s most-visited cemetery. Although it may not be on the top of your long Paris sightseeing list, a stroll through the cemetery’s shaded rows is a walk through more than two centuries of Parisian and French history.

After an early 19th century PR campaign made Père-Lachaise the preferred Parisian resting place, noted architects and sculptors began designing many of the Gothic, neoclassical, and Art Deco monuments and mausoleums that guard the residents. A couple of notable examples include Albert Batholomé’s Monument aux Morts and Jacob Epstein’s angel for Oscar Wilde. The architect of the layout of the cemetery itself, Alexandre-Theodore Brongniart, is buried here. Besides the variety and abundance of graves and mausoleums, Père-Lachaise is home to some impressive memorials and monuments, including the Mur des Fédérés, where 147 Communard rebels were shot against that very wall at the final battle of the Paris Commune in 1871. You’ll also find three World War I memorials, a monument to the French volunteers in the Spanish Civil War, a Holocaust Memorial, and more scattered throughout the grounds.

While the Recoleta in Buenos Aires tells a story primarily about politicians and the city’s wealthy elite, Paris’s Père-Lachaise is perhaps more romantic, as it is the final home to writers, poets, composers, singers, and even a family of chocolatiers. My favorite resident is one you’ll know: Oscar Wilde, whose monument is covered in lipstick prints left by his admirers. Many visitors who do make the trek to the 20e arrondissement often come searching for the grave of musician and songwriter Jim Morrison. Stop by to say you did, but wander around and see whom else you can find. You might run into some of the artists you’ve been admiring in the Louvre and Musée d’Orsay—a favorite of mine, Gustave Caillebotte, is buried here.

4 Paris Itineraries
From the Forums: The 100 Best Free Things to Do in Paris
“Pere Lachaise is a great free thing to do..Paris’ most famous cemetery itself is a trip but check out some of the famous tombs…Get a map from the office to navigate this bizarre maze-like place…” 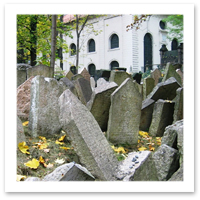 Prague’s Old Jewish Cemetery is located in the city’s Jewish Quarter, Josefov, and is much older than most of the other notable European cemeteries. The oldest tombstone dates to 1439, the youngest to 1787—before Recoleta or Père-Lachaise even opened.

A very small cemetery, the Old Jewish Cemetery was closed on my last visit, so I was only able to view it through its fence. But even from that vantage point I was able to sense how much of the city’s history the cemetery has witnessed. The remarkable thing about the architecture isn’t examples of particular styles, but the overall effect of the tombstones: their age and density give the site an entirely different kind of weight than a massive neoclassical mausoleum does elsewhere.

Although the cemetery is very small, it’s also deep: there are as many as six layers of bodies buried in the Old Jewish Cemetery, including some famous rabbis. The gravestones seem to be clamoring to climb on top of each other, as multiple headstones sprouting from the same spot mark the people buried underneath in layer upon layer. No one knows how many people are actually buried in the Old Jewish Cemetery, but it has been estimated there are about 12,000 headstones representing as many as 100,000 burials.

The Old Jewish Cemetery is near the Old New Synagogue, Europe’s oldest active synagogue, where legend has it that the mystical Golem of Prague is stored. Its creator, Rabbi Yehuda ben Bezalel, is buried in the cemetery, just by the exit. He is the closest you’ll get to an Evita or Jim Morrison here, but the overall effect of this place is striking in a much different way. There’s a profound sense of anonymity and history here that can’t be beat elsewhere.

From the Forums: Trip Report: 2 1/2 Days in Prague
“We explored Stare Mesto a bit, spent about at hour at the Museum of Decorative Arts (free Tuesday 5-7, great view of the Jewish Cemetery from the second floor) and then walked along the river…” 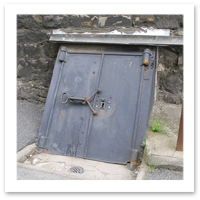 While I highly recommend visiting the more famous Glasnevin Cemetery just outside central Dublin, I would also plan a stop at St. Michan’s, where you can go back even further in Ireland’s turbulent history.

St. Michan’s small graveyard is unremarkable, but its main draw is the vault beneath its church, where you’ll make your descent into a creepy crypt filled with coffins.

St. Michan’s vault includes the coffins of the Sheare Brothers, who were executed by the British after the Irish Rebellion of 1798. But the most memorable residents are the mummies preserved by the unique conditions of the vault: one unknown man, one nun, one single-handed thief, and the eight-hundred-year-old Crusader, whose leathery finger you will be invited to touch by your guide, who clearly enjoys his role as crypt-keeper.

From the Forums: Ireland Itinerary Help for First-Timers
“We are two well traveled boomer adults who will be going to Ireland (home of my ancestors) for the first time. It will be a 10 day, decidedly off season trip and I would be grateful for any comments on this itinerary….”

When you visit one of the world’s great cemeteries, be sure to check at the entrance for any literature. It’s often free (sometimes there’s a small fee), and you’ll get to hear the stories of at least a few of the inhabitants you’re visiting. It’s true that a bit of prior research can help if you’re interested in visiting particular graves, but one of the most enjoyable parts about cemeteries is just taking the time to explore and absorb the history they represent. Although my next big trip is to Istanbul in May, the next cemetery on my list is right at my doorstep: Greenwood Cemetery, in Brooklyn.