Coronavirus Leila Najafi Want to Stay in Costa Rica for Over a Year? A New Law Might Help You
Home  >  News   >   Swank QT Hotel Opens in Sydney 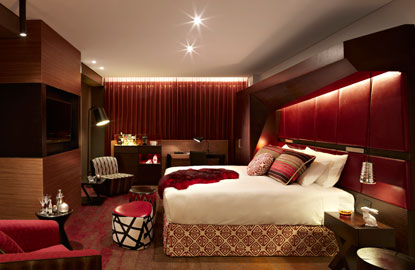 Australia is ramping up its high season and what better excuse to hop on a long-haul flight Down Under than a new hotel?

Open since Monday, QT Sydney is in the heart of the business district in Australia‘s largest city, where Market Street meets George Street. But it’s anything but stuffy. Instead, LED walls of digital art merge with historic Art Deco and Gothic architecture in the shells of two adjacent buildings: Gowings department store (a now-closed Sydney department-store chain) and The State Theatre (hosts performances this fall ranging from Norah Jones to the Russian National Ballet). Guests can create their itinerary while in town via the hotel’s Concierge iPhone and iPad app, a first for a Sydney hotel. Two more QT hotels are in Australia: QT Port Douglas and QT Gold Coast.

Opening rates at this 200-room hotel start at 420 AUD (about US$440). Each of the rooms—spread across 12 room categories—was designed by local architect Shelley Indyk, who relied upon a bright palette of shades of red, orange, yellow, and white set against the building’s original timber floors. The overall look is playful, with items like bowler-hat lamps, offbeat collectibles, and Mark Rothko-inspired rugs. Works by Australian artists Richard Blackwell and Morgan Shimeld, a sculptor in Sydney, round out the rooms’ eclectic look.

In fact, there is a lot of solid design in this hotel. Designer Nic Graham, also of Sydney, and who worked on W Hong Kong, created the public spaces. In-house curator Amanda Love thoughtfully sourced art from mostly Australian and New Zealand artists, including light and video installations in the rooms, lobby, and The Gilt Lounge, that speak to the hotel’s design. Even the elevator has style, with an audio-visual piece adjusting to the mood of the elevator’s occupants.

As a fitting homage to the now-shuttered department-store Gowings, Gowings Bar & Grill is a brasserie-style restaurant with a wood-fire oven on the ground floor. It focuses on wines from young, up-and-coming winemakers from around the world, as well as classic Australian ingredients for breakfast, lunch, and dinner. Robert Marchetti, the restaurant’s creative food director, is well known to Sydney foodies (he’s behind North Bondi Italian Food and La Macelleria, both in the Sydney area, as well as Giuseppe Arnaldo & Sons in Melbourne). Parlour Lane Roasters dish up coffee and espresso drinks along with casual, quick bites for breakfast, and lunch. At The Gilt Lounge, cocktails are served until late.

Pampering takes place at spaQ inside the hotel, specializing in treatments for busy folks—for one, you decide the treatment when you arrive, with some input from a therapist, not before as most spas do. There are six treatment rooms, a barber shop, and a Hammam-inspired steam and ice room.