There is little better than enjoying live music outside in the summer months. And, with an enormous crop of music festivals all over the country, you’ll find plenty of opportunities to do just that, no matter what your musical leanings may be.

So we sorted through the summer’s offerings and picked out the six best looking fests coming up, and compiled a quick guide so you’ll know who to see, where to stay, and what not to miss. Stock up on sunscreen and grab your sunglasses, it’s time to rock ‘n’ roll. 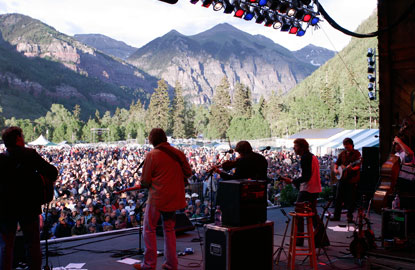 Mainstage Passes are sold out, but Nightgrass show tickets are available from $20.

What’s on: A family-friendly festival in beautiful Telluride, Colorado, this Bluegrass festival has been going for 39 years, keeping up the spirit of the 70s. Look for acts like Alison Krauss and Union Station, John Fogerty, and the Yonder Mountain String Band, plus a Sunday night "house band" performance (including Bela Fleck and Sam Bush, among others). The festival’s main stage is sold out, but you can still get tickets to NightGrass, featuring performances in small venues around Telluride proper.

Don’t Miss: Be sure to check out the festival’s Workshops, held daily in Elks Park. The small, intimate setting is a great way to see musicians in their element; plus, you can watch the preliminary rounds for the Telluride troubadour and band contests.

Where to Stay: One of the best things about going to a music festival in Telluride is getting to go to Telluride; there are a ton of beautiful, luxe accommodations that make use of the staggering beauty of the area. We love the Mountain Lodge for both condo rentals and hotel room options (not to mention the amazing views and the pool and spa access). What’s more, the lodge offers 20% off rates between May 23 and September 30 (rooms from $279 a night, book by June 16th).

Insider’s Tip: This year, you can kick off the festival with a free performance in Telluride’s Mountain Village on Wednesday, June 20, featuring Peter Rowan with Della Mae, and Greensky Bluegrass. 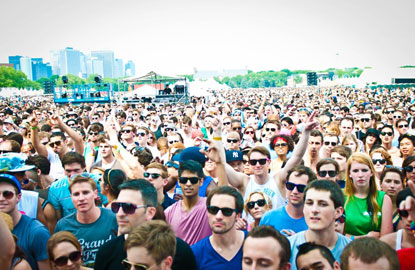 What’s on: Nestled between Manhattan, Queens, and the Bronx, the Governor’s Ball is a two-day festival on Randall’s Island Park featuring some of the best acts of recent years, including Passion Pit, Chromeo, Devandra Banhart, and Santigold. The two-day festival has no shortage of music worth seeing, and thankfully, has just two stages and no overlapping acts so you don’t have to miss anything. Other activities include beer pong, ping pong, and corn hole—but of course.

Don’t Miss: LCD Soundsystem may have played their last show, but front-man James Murphy has been DJing around New York ever since. His set, along with Pat Mahoney, is a must—this will be the best dance party you experience all weekend (and maybe all summer).

Where to Stay: The festival is accessible by ferry, subway, bus, and even foot, if you’re ambitious. If you’re in Manhattan, the east side is definitely the most convenient for festival access. The W Midtown East (rooms from $255) is always a good pick, and has a great bar where you can keep the party going post-festival. For a quieter crash pad, we love The Alex (rooms from $270), a stylish, comfortable option with convenient subway access.

Insider Tip: This year, the festival is putting a larger emphasis on food and will be featuring some stellar food trucks. Have a feast with Luke’s Lobster, Wafels & Dinges, Asia Dog, Coolhaus, and more. 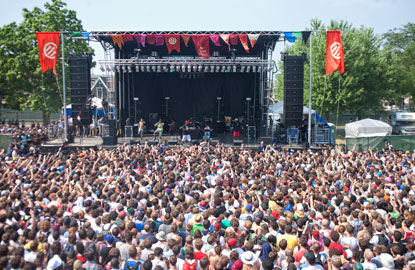 Three-day passes are sold out; day passes from $45.

What’s on: Seeing as Pitchfork is the veritable bible of indie music criticism, you can expect a great, eclectic line up at their festival. Headliners include Feist and Vampire Weekend, with highly anticipated sets from Beach House, Willis Earl Beal, and Cults. It’s worth noting that Pitchfork is easily one of the most affordable summer festivals, especially considering its packed lineup.

Don’t Miss: Ty Segall’s fuzzy, raucous surf rock will be a perfect match for a steamy July day in Chicago. Hey, there are waves in Lake Michigan!

Where to Stay: Grant Park is easily accessible from Chicago’s River North neighborhood, where you’ll find no shortage of hotel options. We love the Amalfi Hotel (rooms from $189), for its comfortable, residential feel, and for the complimentary aperitivo every evening with Italian beer and antipasti. Another great choice is the chic Dana Hotel (rooms from $249), a chic spot with a trendy upstairs bar. 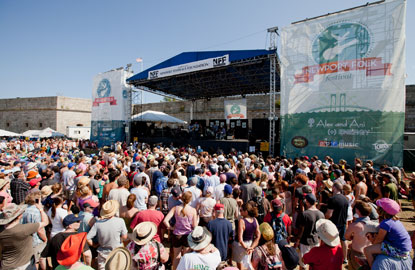 Tickets are sold out, but are available on StubHub (from $245)

What’s on: The Newport Folk Festival has a storied history; it’s where Dylan went electric, after all. And this year’s lineup is a killer collection of acts both modern and classic—from headliners My Morning Jacket and Jackson Browne to supporting acts like the Guthrie Family Reunion, there’s no shortage of stellar performers on board.

Don’t Miss: Hankering for a modern day Dylan? Don’t miss The Tallest Man on Earth—this (admittedly, very short) performer hails from Sweden and has the guitar-picking, vocal-growling skills of Dylan at his very best (catch him at Lollapalooza, too).

Where to Stay: While there’s no camping at Fort Adams State Park, the festival provides information for a number of campgrounds. Should you prefer a hotel, rooms in Bristol are more readily available, as Newport books up fast (and gets expensive). The Bristol Harbor Inn (from $375) is a charming waterfront spot with an incredible restaurant, perfect for unwinding after a long day at the festival.

Insider Tip: In addition to a packed two-day lineup, Wilco will be performing Friday, July 27 at Fort Adams, with support from Blitzen Trapper and Megafaun. Tickets are $45 in advance, $50 the day of the show. 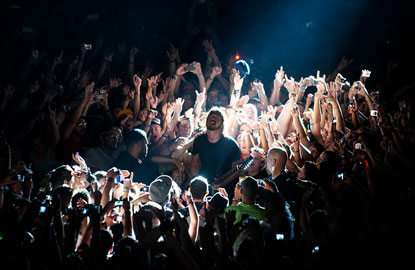 Tickets are sold out, but are available on StubHub (from $137.99). Another option is a travel package, which includes a hotel room.

What’s on: Lolla has always been the rock-lover’s festival, and this year it really lives up to its reputation. Headliners include The Black Keys, The Red Hot Chili Peppers, Jack White, and Black Sabbath, all of whom are pretty much guaranteed to get your rocks off. Supporting acts deviate from the rock genre, with a solid collection of indie, hip hop, and electronica groups.

Don’t Miss: Trying to get a prime spot for a headliner can be a sign of dedication, and a test of will. The Black Keys live absolutely make the wait worth it, though. You’d never believe that two guys could own a stage so well.

Where to Stay: Since Lollapalooza tickets are sold out, take advantage of their travel packages, which include festival passes and accommodation. For VIP style (and VIP concert access), go for the sleek James Chicago VIPTravel Package ($3,329 for two people), which includes a 3 night stay, to VIP festival passes, as well as posters and t-shirts. For GA passes, go for the InterContinental’sTravel Package ($1,679 for two people), where you can cool down by the beautiful pool.

Insider Tip: Lolla’s ‘Chow Town’ has a number of Chicago-centric food options, but be sure to grab a gut-bomb of a burger from Kuma’s, and a cold beer from Goose Island. 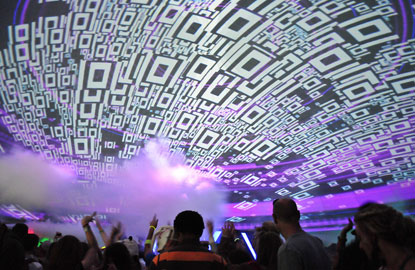 What’s on: Outside Lands is only in its fifth year of festival-dom, but the combination of killer music, food, and wine line-ups has made it an un-missable event. Headliners include Neil Young, Stevie Wonder, and Metallica, with support from heavy-hitters like The Kills, Andrew Bird, and Die Antwood. And they’re not kidding about the food and wine emphasis—the edible line-up was recently announced, and includes some of the best mobile and brick-and-mortar food options in the city, along with a slew of California wines.

Don’t Miss: Jack White has proven himself to be a master of rock ‘n’ roll trade over the past decade, and his solo album is proof positive that his set is a must-see. Fingers crossed he’ll bring the Alabama Shakes onstage (they opened for him in a pair of New York shows), or Alison Mosshart of The Kills (they played together in The Dead Weather).

Where to Stay: Outside Lands gets its name, in part, from being in the outer reaches of the city. Fortunately, San Francisco is small, so you should be able to access the festival’s shuttle service easily from most neighborhoods. The San Remo Hotel (from $109), in San Francisco’s North Beach, is a great budget option. Be warned: there are no private bathrooms. For something more upscale, you can’t go wrong with the Fairmont (from $299), a beauty of a hotel perched atop Nob Hill. Considering the legendary Tonga Room is in the hotel’s basement, you won’t have to go far to find an after party.

Insider Tip: Save time getting to and from the festival—download the Uber iPhone or Android app for instant town car service, and automatic payment from your stored credit card information.