News Tina Charisma 'Regenerative Travel' Is the New Buzz Phrase, but What Does It Mean?
Home  >  News   >   Singapore’s Street Food 101

Singapore is often thought of as the cleanest, safest, and, some would say, most sterile country in Southeast Asia. While it’s true that Singapore is graffiti-free and remarkably efficient, a vibrant street food culture pulses through the city, reflecting the island’s diverse cultural makeup. Flavors from China, India, Malaysia, and Indonesia mix effortlessly, creating a cuisine that’s lively, bold, and totally unique. At the heart of the city’s food scene are hawker centers, open-air food markets with dozens (sometimes hundreds) of vendors slinging local specialties at prices that hurt significantly less than a shopping spree on Orchard Road. Here’s a look at eight of the best foods to try at Singaporean hawker stalls and where to find them. 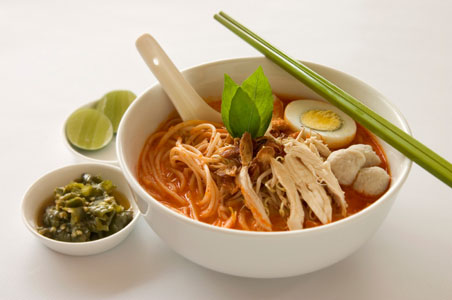 Hokkein mee: One of the most common and beloved dishes in Singapore, Hokkein mee, or fried prawn noodles, originally hail from Fuijan Province, China. Though the finished product might not look like much to the casual observer, this is a complex, deeply flavored dish: the noodles (both egg and rice vermicelli) are stir-fried in lard and prawn stock, then tossed with juicy fresh prawns, bean sprouts, and bits of scrambled egg. Spicy, funky chili sambal sauce comes on the side, as does a sweet-tart calamansi lime to help cut the fat.

Hainanese chicken rice: Considered the national dish of Singapore, though as the name implies, it’s Southern Chinese in origin. The chicken is poached in a rich, ginger-laced stock, which is then used to cook the rice, permeating every grain with an oily, flavorful sheen. Sliced-to-order chicken is served with several sauces: chili, ginger, and soy-ginger. The dish is widely available across Singapore, though certain vendors command serious lines.

Chili crab: Although it’s often served in restaurants (and some street stalls), there is perhaps no dish more iconic to Singapore as chili crab, so we’re including it here. A tangled pile of whole crabs are steamed in a thick, sticky-sweet tomato-chili sauce, served with some sort of carb—steamed Chinese buns, baguette, or rice—to sop up the leftover sauce. It’s a gloriously messy, hands-on affair that’s a must-eat for any visit.

Carrot cake: Don’t expect the cream cheese-frosted dessert: in Singapore, carrot cake, aka chai tau kway, is a jumbled, fragrant mess of glutinous radish cake cubes stir-fried in lard with scrambled eggs, preserved radish, garlic, and scallions. In China (the dish is Fujianese in origin), the word for daikon radish and carrot are the same, hence the name. It comes in two versions: white and black, the latter gussied up with a hefty pour of thick, dark soy sauce.

Roti: A dish reflective of Singapore’s Indian population, roti (bread) prata (flat) is a thin, flaky flatbread griddled to order and folded into a neat kerchief. Akin to naan bread, it’s served either plain or stuffed with fillings ranging from scrambled eggs to bananas, and accompanied by a cup of savory curry as a dipping sauce. Tear it apart with your hands and dip each bite into the curry, then slurp the leftover soup.

Laksa: A prime example of Peranakan cuisine (also known as Nonya)—a mix of Chinese and Malaysian flavors—laksa is a rich noodle soup with a spicy coconut milk broth and thick rice noodles. Bowls come topped with a combination of bean curd puffs, prawns, cockles, fish cakes, bean sprouts, and/or hard-boiled eggs. One of the most popular styles in Singapore is Katong laksa, in which the noodles are cut into bite-sized pieces so it can be eaten with just a spoon. There’s only one stall with the registered name "Katong," but imitators abound.

Popiah: A fresh spring roll originally from southern China, popiah is one of the lighter Singaporean street snacks, a welcome break from the glut of fried noodles and dough. Tissue-thin crepe skins are wrapped around juicy shreds of cooked jicama, bean sprouts, shredded omelet, and crushed peanuts, then drizzled with hoisin and chili sauces. Fillings vary by vendor—one well-known popiah stall laces their rolls with lard and crispy pork cracklings, while others add shrimp or strips of tofu.

Rojak: Malay for "mixture," rojak is a complex salad that manages to hit sweet, salty, and spicy flavor notes all at once. Every version is slightly different, but might include a mix of pineapple, cucumber, sweet turnip, beansprouts, jicama, mango, and water apples (a small tropical fruit), plus fried dough fritters and soybean cakes, tossed in a shrimp paste-chili-lime dressing and doused in crushed peanuts to finish. It’s a riotous, refreshing mix of fresh flavors that works well as the finale to a heavy meal. 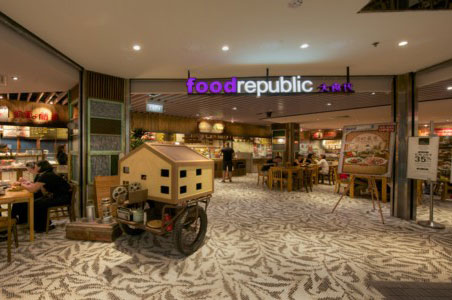 Maxwell Road Hawker Centre: A historic pre-war hawker center in the heart of Chinatown, Maxwell Road boasts over 100 stalls in three densely packed rows. The aesthetic is utilitarian, but the place is has a vibrant, buzzing vibe, and a fresh renovation as of December 2012. Favorites include the Tian Tian Hainanese Chicken Stall (#10), fried treats from China Street Fritters (#64), and stir-fried noodles from Marina South Delicious Food (#35).

Photo Credits: What to Eat: hywit dimyadi/iStockphoto; Where to Eat: Courtesy of Food Republic