News Jesse Tabit It's 2020 and Somehow These 5 U.S. Cities Don't Have Clean Drinking Water
Home  >  News   >   Statue of Liberty to Reopen on its Birthday

Statue of Liberty to Reopen on its Birthday 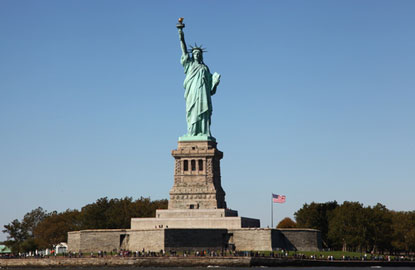 October 28 marks the 126th birthday of the Statue of Liberty, and Lady Liberty is ready to celebrate. On that day, the interior of the monument, which has been closed for one year for renovation, will reopen to the public while final work is being completed. The rest of the renovation is expected to be finished by year’s end.

On October 29, 2011, the interior of the statue was closed for a $27.25 million safety and accessibility renovation. Improvements include new up-to-code stairways, fire suppression systems, mechanical and electrical updates, new elevators, and updated restrooms (Hurray!, says anyone who’s ever waited in line for admission). According to the National Parks Service, the results will be a more accessible and tourist-friendly Statue. Liberty Island, which sees about 3.5 million visitors every year, according to the NPS, has remained open during construction.

"We have reached a critical milestone in our Fire and Life Safety Project where we can begin to allow visitors back in to the monument on a limited basis while the project moves to completion by the end of the year. We are very excited that Lady Liberty will once again open her doors on her 126th birthday; October 28th," said David Luchsinger, superintendent of Statue of Liberty National Monument and Ellis Island in a statement to the press.