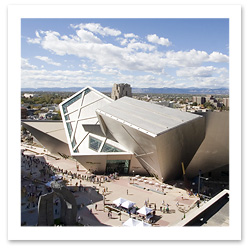 North America’s art museums are in the midst of a building boom, with new — or at least strikingly renovated — ones appearing at an astounding rate. But curators aren’t allowing architecture to overshadow the art. In fact, the talked-about newcomers are hosting some of the year’s hottest shows.

The revamped Denver Art Museum, which opened in October, is expecting a flood of visitors during its first summer season. Many will undoubtedly come to see the controversial $110-million Hamilton Building. It is, after all, like Bilbao’s Guggenheim Museum, a “starchitect” extravaganza, in this case a Daniel Libeskind-designed edifice that’s been likened to a massive piece of metal origami. The debut exhibit, appropriately titled Debut, in the old North Building, is also worth seeing. It features 21 textile art acquisitions, ranging from a pre-Columbian weaving to contemporary crocheted sculptures (it’s up through November 25). (photo, right)

Beauty-obsessed Angelenos aren’t the only ones opting for a fresh look these days — their city’s most esteemed art venues are as well. First, the Getty Villa (in Malibu) got an extreme makeover in 2006; now the Getty Center in Brentwood is getting two new outdoor galleries showcasing sculptures collected by film producer Ray Stark and his wife, Fran. But while the Getty Villa is known for its classical focus, the Getty Center is going modern. Along with Roy Lichtenstein’s Bunyanesque brushstrokes, you’ll find works by 20th-century masters like Miro, Moore, and Maillol among the 28 acquisitions.

D.C.’s Reynolds Center — it used to be the Old Patent Office Building — won’t be officially finished until the glass-roofed courtyard Norman Foster designed is done in November. But the two Smithsonian museums comprising the center, the American Art Museum and National Portrait Gallery, opened last July after being restored to their Greek Revival grandeur. An exhibit detailing the evolution of this 19th-century landmark, Temple of Invention, runs until January. If that doesn’t pique your interest, try Great Britons: Treasures from the National Portrait Gallery, London. It celebrates influential Britons from Henry VIII to David Beckham until September 3. 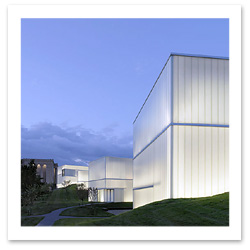 The Nelson-Atkins Museum of Art opened its new Bloch Building in June. The ribbon-cutting was proceeded by much hype (Time magazine called this the “Most Anticipated Building” of 2007), but Steven Holl’s design does not disappoint. His five glass pavilions, which he calls “lenses,” serve as a luminescent counterpoint to the museum’s original and rather intimidating Beaux-Arts venue. The exhibit it houses — Manet to Matisse: Impressionist Masters — is equally impressive. Running until September 9, the blockbuster is built around the privately held Bloch Collection, which includes 30 works by Manet, Monet, van Gogh, Gauguin, Cézanne, Renoir, and Degas. (photo, right)

Boston’s Institute of Contemporary Art, designed by Diller Scofidio + Renfro, moved amid much fanfare to Fan Pier last December. The city’s first new art museum in almost a century boasts a bold cantilevered design that juts prow-like above HarborWalk, so visitors can’t miss it. Don’t miss the stand-out summer exhibition dedicated to native New Englander Philip-Lorca diCorcia. His photographs meld documentary and cinematic traditions, and the show displays 125 of them stretching back to the late-1970s. Running through September 3.

The Seattle Art Museum is at it again. Last January it installed 21 works on a nine-acre property overlooking Puget Sound to create the Olympic Sculpture Park. Then in May it opened an expanded SAM Downtown facility. By spreading into four stories of a new 16-story tower, the museum opted for low-key practicality, not high style. But that doesn’t mean there’s little to admire — in fact there are more than 200 new acquisitions being showcased, half of them in special-exhibition galleries. A show highlighting SAM’s conservation efforts, Five Masterpieces of Asian Art, is up through September 9. 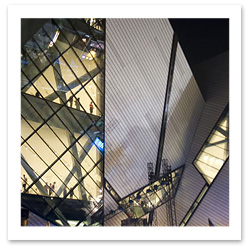 Another Libeskind creation is stopping traffic, the 175,000-square-foot Michael Lee-Chin wing at Toronto’s Royal Ontario Museum, which was just unveiled in June. The reaction isn’t surprising since the prismatic construction, reportedly inspired by the ROM’s mineral collection, resembles an angular, oversized crystal. The inaugural exhibit, Hiroshi Sugimoto’s History of History, combines his photographs with traditional Japanese artifacts and natural materials (fossils among them) drawn from his personal collection. It’s on display until August 19. (photo, right)

Angels in the Architecture

The winner of the “small but mighty category” is the Mississippi Museum of Art, which almost doubled its gallery space when it moved into sleek new digs in downtown Jackson this spring. To show off its increased square-footage, the museum launched Between God and Man: Angels in Italian Art, an exclusive exhibit curated by the Director General of the Vatican Museums. This divine show includes 150-plus themed works from various periods; however, the star attractions are paintings by Renaissance bigwigs like Titian and Fra Filippo Lippi. The show is on view throughout 2007.

The Philadelphia Museum of Art will expand into the Art Deco Perelman Building in September following a $90-million dollar renovation. Located across the street, the 100,000-square foot annex has space for rotating pieces from the permanent collection, as well as classrooms and a library. But while waiting to see them you can profitably peruse two current exhibits: Forging an American Identity (featuring the works of 19th-century narrative painter William Ranney) and Room for Revolution (the focal point of which is a life-size portrait of George Washington). They close August 19 and August 30 respectively.