Bounded by the Black Sea to the north, the Aegean to the west, and the Mediterranean to the south, Turkey resembles a huge ready-to-shake hand reaching out from Asia to Europe. Eager to say merhaba (or just plain "hello") to this intriguing country? By focusing on these four regions, you can experience the top Turkish delights—including urban excursions in Istanbul, balloon rides in Cappadocia, and archeological adventures along the coast—and still have time for some beach bumming on the side. 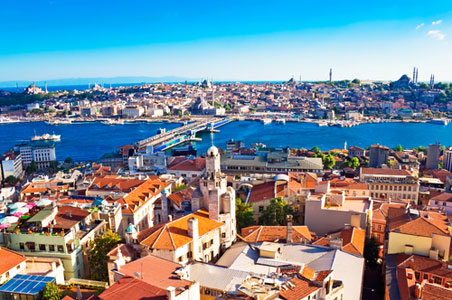 Turkey’s largest city is a pulsating place. Witness diners clamoring for kebabs in pint-sized eateries or the manic merchants giving prospective buyers the come-on at the Grand Bazaar (a shopping addict’s equivalent to crack). At the same time, though, a transcendent calm descends on sites like the mosaic-filled Aya Sophia or Yerebatan Sarnici cistern; and a sema ceremony, featuring the spinning Sufi mystics known as whirling dervishes, will tranquilize even the most type-A traveler. Cacophony versus quietude is only one of the contrasts that make Istanbul so appealing: after all, this is a city that bridges the line between east and west, ancient and modern. For proof of the latter, simply trade historic Sultanahmet (the age-old walled city) for Beyoglu (the trendy "New Town"). It’s an irresistible combo that landed Istanbul on both our current Go List and our round-up of our favorite affordable destinations for 2013.

Moving On: When you want to skip outside the city, take a day cruise on the Bosphorus. Sights (think suburban palaces and traditional waterfront villages) are camera ready and the price ($15 or less) is right. Alternately, hop a ferry to the quiet, car-less Princes’ Islands in the Sea of Marmara. 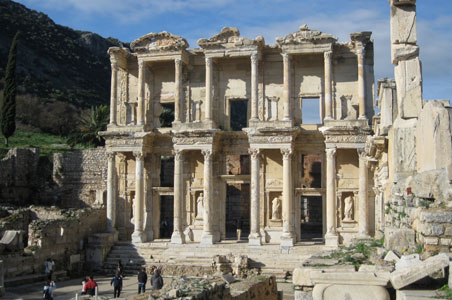 Thanks to spots like Troy and Pergamum, the upper, less-touristy part of this coast lures Indiana Jones wannabes. Yet the star attraction lies south at Ephesus. This was a thriving port until the harbor silted up, severing its lifeline and, in the process, turning one of the classical world’s biggest cities into one of the contemporary world’s grandest ghost towns. From the legendary library and temples to the brothel and public bathroom, its Greco-Roman ruins never fail to impress. Ephesus has early Christian connections, too. St. Paul lived here, plus St. John was said to be buried in an eponymous basilica nearby, and Virgin Mary reputedly lived at Meryemana. A good base from which to explore is Kusadasi. With markets and mezes, it offers a taste of Turkey in miniature and is pleasant enough—unless clogged with cruise passengers from the ships that often dock here. If you’re more into beaches, the resort towns of Çesme (above Kusadasi) and Bodrum (below) offer plenty of fun-in-the-sun opportunities along with a palpable sense of history.

Moving On: Pamukkale is accessible on a daytrip (albeit a long one) from Kusadasi. Clamber up calcium-encrusted travertines and reward yourself by swimming amid fallen antique columns at the Sacred Pool, where naturally-heated thermal water hovers around 95 degrees. 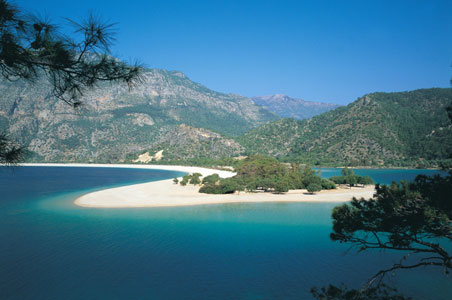 Near Bodrum, the shoreline begins swinging east as the Aegean Sea gives way to the Mediterranean. This is the fabled the Turquoise Riviera, ("turquoise," in fact, comes from the French word for "Turkish"). Crystalline water tinted that titular shade of blue laps some of the beast beaches in the entire region—including the Blue Lagoon, a postcard-stand staple. At Ölüdeniz, the adjacent resort area that’s hugely popular with Brits, you can sign up for activities ranging from paragliding and scuba diving to horseback riding. The downside is that it’s overdeveloped. So, to shake the crowds, head nine miles north to Fethiye. The city is hot with hikers as it’s the gateway to the 311-mile Lycian Way. Turkey’s answer to the Appalachian Trail has glorious gorges and mountainside forests, plus the making of a myth around every corner; however, attractions like a working 500-year-old working hamam and 2,400-year-old rock tombs (essentially the façades of Ionic temples carved into cliffs) make Fethiye itself worth seeing. A variety of water-based excursions can be booked on its pretty harborfront promenade.

Moving On: Avoid crowds altogether by taking a private, multi-day blue cruise aboard a vintage wooden gulet. Boating enthusiasts may also enjoy a ferry-tale trip to a nearby Greek island. During the warmer months, for instance, hydrofoils link Fethiye and Rhodes. Return tickets start at around $80. 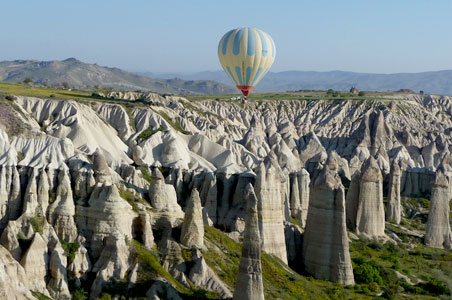 In terms of size, Turkey is larger than Texas and its vast interior is of marginal interest to vacationers. The tourist infrastructure tends to be unsophisticated and safety concerns arise in the east as you approach the borders of Iran, Iraq, and Syria. The exception to this rule is the captivating, cave-riddled Cappadocia region of Central Anatolia where soft volcanic rock has been sculpted over eons by the elements to create a one-of-a-kind topography—something that alternately looks like a sci-fi film set and a landscape dotted with supersized sandcastles. Scratch the surface with a walk to the UNESCO-designated Goreme Monastery Complex. Afterwards, join the underground movement at Derinkuyu and Kaymakli—a pair of subterranean troglodyte cities; then go above and beyond on a sunrise flight in a hot-air balloon (prices can be sky high, with rates starting around $220, but it’s worth the splurge!). Unless you suffer from speluncaphobia, cap things off by booking into a comfy cave hotel. Argos in Uçhisar is an unforgettable place to get your Flintstones fix.

Moving On: Cappadocia is an out-of-the-way destination. If you’re willing to go even further afield, though, make a bus trip (about $54 return) to Konya. The city is revered by Turks—and a global contingent of literature lovers—as the burial place of famed mystic poet, Mevlâna Celaleddin Rumi.

Turkey has joined the Eurail system, but the extensive national bus network still offers more flexibility. Turkish-based budget airlines like Pegasus also connect domestic destinations quickly and inexpensively: if you plan a month ahead, you can currently snag one-way tickets from Istanbul to Cappadocia, Dalaman (gateway to the Turquoise Riviera), or Bodrum for about $47. If you want to explore a coastal region fully, rent a car. Highways are mostly modern—though you may need to brake occasionally for a stray goat.

Frequent fodors.com contributor Susan MacCallum is a history-loving, souk-obsessed, kebob connoisseur who likes warmer climates, so Turkey appeals to her on many levels. When not on the road, Susan lives in Halifax, Nova Scotia with her husband and two children.