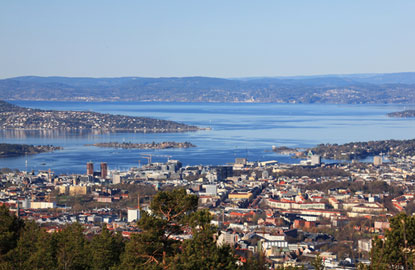 Cold winters may intimidate travelers from venturing to Norway, but when it comes to cultural influence and outdoor adventure, skipping it entirely would be a grave mistake. City dwellers looking for peace and quiet will find solace in the country’s calm surroundings, while art connoisseurs are sure to revel in its architectural highlights and unique design aesthetic.

The country is broken down by region, with major cities like Oslo, Bergen, Trondheim, Stavanger, and Tromso serving as top tourist destinations. And the small, quaint city of Lillehammer was added to the map after hosting the 1994 Winter Olympics. Nature lovers will undoubtedly gravitate toward Western Norway’s fjords, which are ideal for hiking, glacier walking, cycling, and fishing.

What Norway may lack in size, it more than makes up for in vibrant and varied landscapes. One perk of traveling through a smaller country is getting to combine the best that both city and nature have to offer. Oslo, for example, is surrounded by ski slopes in the winter while Trondheim has a unique bicycle lift called "Trampe" which actually takes tired bikers to the top of the nearby mountains. Still not sure where to land, what to explore, and when to go? Read on for our starter kit to Norway.

No trip to Norway is complete without visiting its capital city. Oslo (pictured above) has at least four clearly defined neighborhoods, which are easily discovered on foot. Kvadraturen is considered the city center is one of the most lively and crowded. This is where you’ll find endless clothing stores, cafes, bars, and nightclubs. Aker Brygge sits along the water and has a slew of restaurants serving fresh fish and seafood. Nearby is Tjuvholmen, a relatively new borough and one characterized by innovative architecture, art galleries, and museums.

Don’t Miss: To see Oslo’s most fashionable at play, head to the Grünerlokka neighborhood for their weekly Sunday flea market. 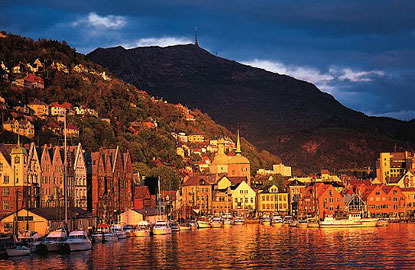 Often referred to as "the gateway to the fjords of Norway", Bergen rarely disappoints even the highest of expectations. An old city with a youthful spirit, it’s breathtakingly beautiful and not difficult to explore by foot. In fact, most travelers prefer to wander through the city’s old, cobblestoned streets. Proving the perfect blend of both natural and urban elements, Bergen’s seven mountains can be clearly seen in the distance, further adding to the already picturesque backdrop, and to the list of activities one can find in and around Bergen; from hiking and skiing to boating and fishing, there’s no lack of things to keep you out of doors.

Don’t Miss: Head to the wharf and stop by their popular Torget Fish Market. From there, adventurers can hike to the top of Mount Floyen for a city-wide view. 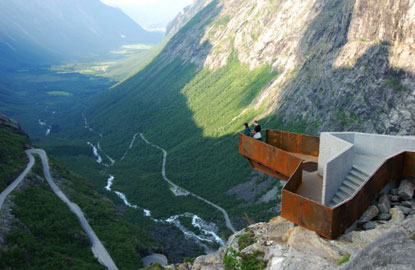 Norway’s famous fjords span most of the country’s western side, roughly between Stavanger and Trondheim. While there are a number of different fjords to see, a few stand out above the rest in terms of magnitude and popularity, including the Romsdalsfjord, Geirangerfjord, Nordfjord, Sognefjord, Næroyfjord, and Hardangerfjord. The Sognefjord is probably the most recognizable, as its Norway’s largest and the world’s second largest. Book a themed tour or cruise to explore by water, or venture through the region by car.

Don’t Miss: Hardangerfjord has great hiking trails with spectacular views and is one of the more accessible fjords in Norway, as it is surrounded by small towns. 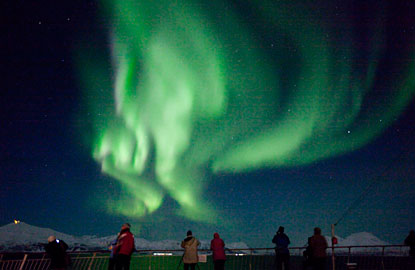 Every year, there’s an eager anticipation leading up catching a glimpse of The Northern Lights, but luckily the expectations live up to the hype. The Aurora Borealis lights up the northern sky most frequently in late autumn and in winter through early spring. During the autumn equinox, which starts on September 21 and ends on March 21 is the best chance to view the Northern Lights because darkness sets in from 6 pm until 1 am daily. While technically, one can see the lights from anywhere in Norway, the best viewing spots are above the Arctic Circle in the northern most part of the country.

If your fear of cold weather is too much to bear (understandable), visit Northern Norway in the summer during its Midnight Sun. Occurring north of the Arctic Circle and south of the Antarctic Line, get ready for 24 hour days filled with nothing but sunshine and mostly pleasant weather. From the Arctic Circle, the midnight sun lasts from June 12 through July 1st and if you make it to the North Pole, the sun actually does not set for an entire six month period.

Don’t Miss: Enhance your Northern Lights experience by hopping in a snowmobile, embarking on a leisurely cruise, or partaking in a dog sledding ride underneath the night sky.

Most flights from the United States fly in through Oslo International Airport. Passengers can then either take a short flight to other major cities or opt for a longer and more scenic train ride. Most airlines servicing Norway offer direct flights, which is helpful in cutting down extra travel time. If traveling from within the UK and other European countries, more flights are available for various Norwegian cities.

Want more Starter Kits? We’ve got your cheat sheets for Nova Scotia and Chile, with more to come.