Two words usually come to mind when we picture Colombia: unfortunately, they are "Pablo" and "Escobar." The notorious drug lord, however, has been dead since 1993, and key parts of his homeland have now emerged from tourism rehab making the affordable, off-beat country South America’s rising star. These destinations in particular are ripe for discovery. 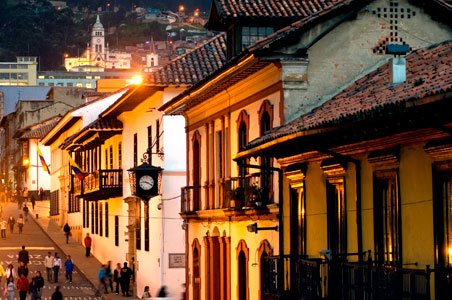 Located in the center of Colombia at an altitude of about 8,600 feet, the national capital has 8.25 million residents and an invigorating urban buzz. The latter could be chalked up to the copious amount of local coffee, or perhaps to the trendy arts scene and pulsating nightlife. Visitors, of course, still honor the past by gravitating to Bogata’s oldest (and most evocative) quarter, La Candelaria. Established in 1538, this restored neighborhood is home to three Fodor’s Choice sites—including Iglesia Museo Santa Clara, a divine fresco-filled church-cum-museum, and Museo de Oro which lives up to its name by showcasing an eye-popping collection of pre-Hispanic artifacts crafted from precious metal. Rounding out the trio is Museo Botero, which displays over 100 works by Colombia’s own Fernando Botero (his signature was his "fat figures") plus 85 pieces from the artist’s A-list collection, among them works by Monet, Matisse, Picasso, and more.

Insider’s Tips: Before leaving town, toast your trip with a shot of Colombian aguardiente (literally "burning water"): locals’ favorite drink since the days of Spanish rule. Like Ouzo or Sambuca, it’s flavored with anise and best enjoyed with friends.

Branch Out: Villa de Leyva, a meticulously-preserved colonial town north of Bogota in the Boyacá region, offers a respite from city bustle plus easy access to ancient standing stones and natural attractions like the Iguaque Flora and Fauna Sanctuary, a preserve centered around a sacred lake. 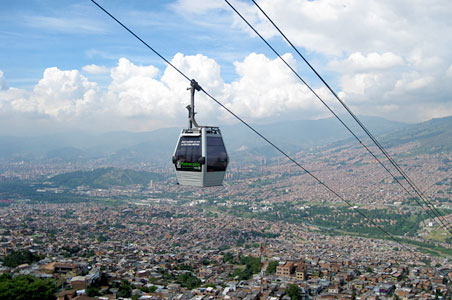 If places were people, Medellin, in northwest Colombia, wouldn’t be voted "most popular." But it might be "most likely to succeed." That’s because the City of Eternal Spring (nicknamed for its temperate year-round climate) is also a city of eternal optimism. In fact, Medellín’s most attractive feature may be the positive outlook of its 3.5 million inhabitants who, generally, seem as vivacious as poster girl Sofía Vergara. The pride they take in having turned their town’s violent reputation on its head is obvious when you see them strolling the lovely botanical gardens, perusing the sculptures in Plaza Botero, lingering over tinto (slang for coffee), or simply rumba-ing the night away. To understand the magnitude of change over the past decade, ascend to Biblioteca Espana: an architecturally-stunning library in what had been an isolated mountainside slum. The trip up on the ultra-modern Metrocable offers fabulous views.

Insider’s Tips: Come between December and mid-January for an illuminating experience. During the Festival de la Luz millions of colored bulbs light up Medellín creating one of the world’s most dazzling holiday displays.

Branch Out: Arguably the most popular day-trip destination is Santa Fe de Antioquia, a charming 16th-century enclave 50 miles northwest. This and other outings can be arranged by Land Venture Travel. Its menu includes everything from half-day coffee plantation tours to overnight eco-adventures. 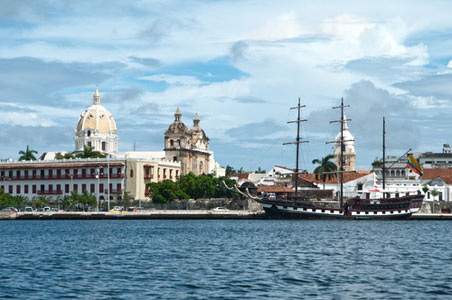 "Beguiling" is often how people describe this cruise port on the Caribbean Sea—and rightly so. Its UNESO-designated Old Town is laced with labyrinthine cobbled streets and graced with Spanish colonial buildings painted in a Crayola box of colors. It once inspired Colombia’s Nobel Prize-winning author Gabriel García Márquez, and it still makes romantics’ hearts pound. History buffs are equally enthralled by Cartagena’s turbulent past. The city walls were built in the 1500s to defend against the original Pirates of the Caribbean; and sites like the Palacio de la Inquisicion, where Roman Catholic Inquistors judged the state of locals’ souls, prove threats came from within as well (if you admire antique instruments of torture, this is the spot for you!). After exploring assorted cathedrals, castillos, and courtyards, retreat to the beach by taking a boat to Playa Blanca or Islas del Rosario, a coral archipelago that promises great snorkelling in addition to sun and sand.

Insider’s Tip: Love to hit the spa? For straight-up pampering, visit the lux Tcherassi Hotel + Spa where options include a cleansing Colombian Coffee Wrap. For a down-and-dirty alternative, try a mud bath just 45-minutes away at Volcan Totumo.

American Airlines, which has been serving Colombia since 1990, travels direct from Miami to Bogotá, Medellín, and Cali. Colombian-bound flights are also available through Delta, United, and JetBlue. Within the country, flying is the most efficient way to get from city to city. Avianca, Copa, and LAN all cover domestic routes as well as international ones.

Positioned at the very top of the continent, Colombia is a mountainous country that’s bordered by both the Pacific Ocean and the Caribbean Sea, so it has many climatic zones. But, overall, December through March is the optimal time to go weather-wise.

A Word on Safety

Despite huge leaps forward, the national tourism board slogan—"the only risk is wanting to stay"—still isn’t completely accurate. Isolated towns and rural areas are best avoided. In urban centers, commonsense dictates that you take the same precautions you would elsewhere in South America.

Frequent fodors.com contributor Susan MacCallum is a budget-minded coffee addict who loves warm climates, so Colombia appeals to her on many levels. When not on the road, Susan lives in Halifax, Nova Scotia with her husband and two children.