Splurge vs. Save: Glamping

Once upon a time, all it took to turn a tenter into happy camper was a dry sleeping bag and a few choruses of "Kumbaya." But the advent of glamping raised the bar. If you’re ready for it, we have options for every taste and budget. 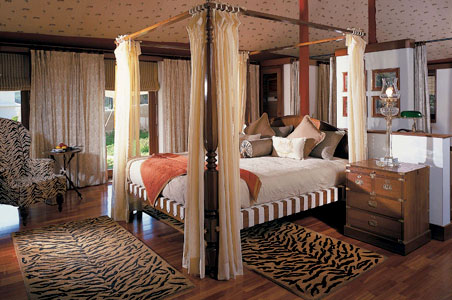 Splurge: India’s Oberoi brand has few peers when it comes to ultra-lux lodgings—and you can see why by bedding down at Oberoi Vanyavilas, Ranthambhore in southeast Rajasthan adjacent to Ranthambhore National Park. Ranthambhore was once a private tiger-hunting ground for royals, and the opulence of the Maharaja era is recreated in the resort’s sumptuous tents. Outside they’re wrapped with private decks and walled gardens; inside they boast four-poster beds and bathrooms with slipper tubs. Elsewhere on the 20-acre resort you’ll find the expected five-star amenities (including a spa), and expeditions to the national park run daily. A night’s stay for single or double occupancy costs $1,000.

Save: If that’s too rich for your tiger blood, try Khem Villas. Located in the same vicinity, its tents are neither so private nor so opulent. That said, they are lovely, surrounded by small, tranquil bodies of water, and a relative bargain at $340 per night for doubles with all meals included. Those meals range from casual breakfasts to Full Moon campfires. The hotel will also arrange jungle trips, nature walks, and drives to see herds of Black Buck, just an hour away from Ranthambhore. 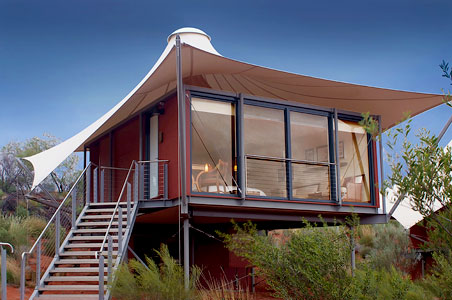 Splurge: Australia’s Longitude 131 helped kickstart the glamping craze when it opened in 2002; and in the decade since it has become one of the country’s most renowned spots. Obviously location has a lot to do with that: this Red Centre resort in the heart of The Outback faces iconic Uluru, aka Ayers Rock. Panoramic views aside, its 15 canvas-topped, glass-fronted "tents" provide timeless style, modern comforts (including ac) plus top-notch dining and access to a menu of ecologically- and culturally-sensitive activities. All-inclusive prices there start at $2,268 a night for double occupancy.

Save: Alternately, you can go Down Under without going over budget by choosing the Ayers Rock Resort Campground, a sister property where pitch-your-own-tent sites start at $37. The same company also owns Home Valley Station in the Kimberley region: a working cattle station that served as a filming locale for the Nicole Kidman-Hugh Jackman flick "Australia." Its attractive, fully-furnished eco-tents are a reasonable $140-$190 a night, while its Dusty Bar and Grill offers local ingredients in a true cowboy-esque atmosphere. 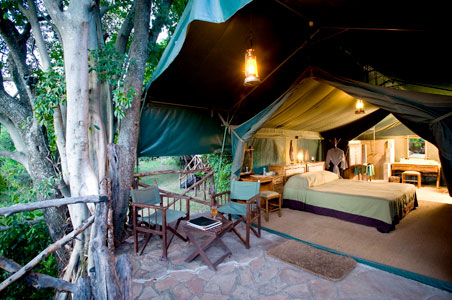 Into (and Out of) Africa

Splurge: Africa’s safari circuit is dotted with tent encampments, many of the best being operated by & Beyond. The company features 10 in four different countries, so there’s no shortage of places where you can simultaneously enjoy exotic creatures and creature comforts. Exhibit A: Nxabega, in Botswana’s legendary Okavango Delta, where tents look like they were designed by the love child of Ernest Hemingway and Karen Blixen. All-in nightly rates are $570-$1,145 per person depending on the season.

Save: One way to cut back, of course, is to pick a less expensive option: for example, Kichwa Tembo, on Kenya’s Masai Mara Reserve, is more affordable at $310-$450 a night. A second is to save on lodging—to say nothing of airfare—by trying a US wildlife park instead. Take Safari West in California. The 400-acre preserve is home to giraffes, zebras, and other African wildlife; moreover, it has canvas-walled cabins (each with a game-viewing porch) that were imported from the continent for an authentic safari feel. Doubles are $200 to $315. 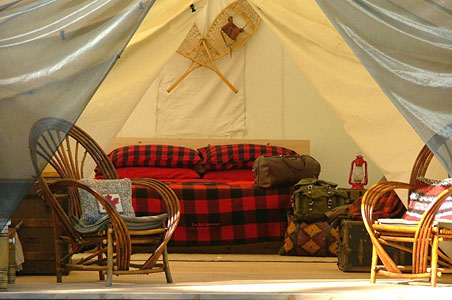 Splurge: Clayoquot Wilderness Resort on Vancouver Island garnered lots of press in 2008 when Ryan Reynolds wed Scarlett Johansson there; and though the marriage didn’t last, the resort’s reputation endures. No wonder… Remote, rugged, but still romantic, its 20 prospector tents come complete with propane wood stoves, cozy rugs, and antique accoutrements. Those, together with fine dining and outdoorsy activities like kayaking, riding and whale-watching, made Clayoquot a 2011 Fodor’s 100 Hotel Award Winner. Open mid-May through September; all-in prices (including air transfers from Vancouver) are $1,616-$2,059 per person, per night, based on a three-night stay.

Save: Over on B.C.’s equally beautiful mainland, glampers can settle in for much less. Rockwater Secret Cove Resort has stylish "tenthouses" with room-only rates from $231 to $530; while the lone tent available May through September at The Red Snowshoe B&B (a classic equipped with flannel bedding, twig furnishings and a wood-burning stove) is a steal at just $125.

No matter how deluxe, these are still tents; hence consider the weather at your destination before booking.

When budgeting, bear in mind that unique accommodations such as these often have minimum-stay requirements.

Make sure there’s enough to occupy you onsite. Since camps tend to be isolated, you’ll essentially be stuck there.

Sites like Glamping Hub, Go Glamping, and Glamping Girl are valuable resources when you’re seeking variations on the theme.

I-Escape includes a hand-picked selection of upper-end tents; while AirBnB covers budget-friendly yurts and much more.

For affordable alternatives in Europe, click Eurocamp; for the US, see Fodor’s own Travel Blog recommendations.

A tenter from way back, frequent fodors.com contributor Susan MacCallum spent one of her best-ever nights under canvas in the Sahara. When not enjoying cocoa around the campfire, Susan lives (in a real house) in Halifax, Nova Scotia with her husband and two children.