Splurge vs. Save: European Castle Stays

Palace, palazzo, schloss, slot, burg, kasteel, or plain ol’ castle… whatever you call Europe’s historic piles, sleeping in one has widespread appeal. We’ve looked high and low for the very best at every price point (seriously). 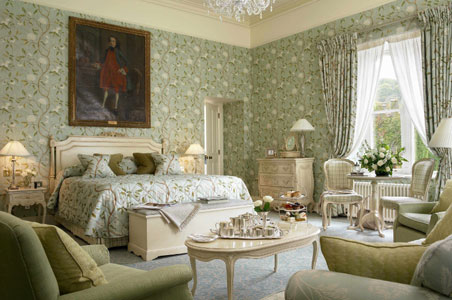 Despite its relatively small size and down-to-earth reputation, Ireland is considered ground zero by many castle aficionados, not only for the quantity of its palatial abodes but the quality. After all, the Emerald Isle boasts envy-inducing Fodor’s Choices like Waterford Castle, an 800-year old crenulated beauty that occupies a private island, and Dromoland Castle, a Gothic extravaganza that once housed King Brian Boru’s descendants. (Doubles are $155-$626 and $317-$1,964 respectively, depending on room and season). Poised between them, price-wise, is Ashford Castle. Erected on the edge of Lough Corrib in 1228, then built (and rebuilt) over successive centuries, the gorgeous grey-stone complex earned a spot on the Fodor’s Top 100 Hotels list last year. 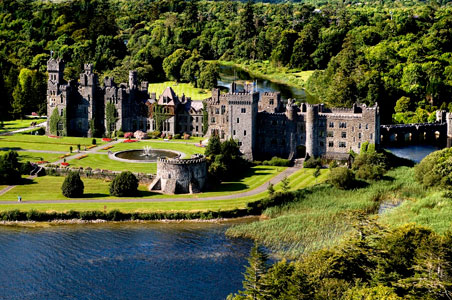 The surrounding grounds (pictured) offer to-the-manor-born activities like falconry, riding, and archery. More importantly, the castle itself—with enough turrets and towers to make Rapunzel blush—fulfills all fairy tale fantasies. Atmospheric common areas (think heavy oak paneling, museum-worthy antiques, plus the mandatory suits of armor), only heighten the spell; and as for the 83 guest rooms, let’s just say that those in the castle’s oldest section are plush enough to make Downton Abbey seem dowdy. It is worth noting as well that Ashford has been operating as a hotel since 1939 and in that time has learned a thing or two about catering to guests. So you can also expect superlative service. Doubles cost $228- $749. 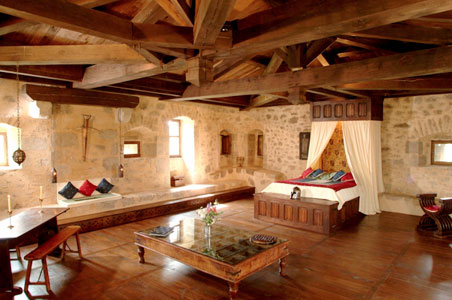 Ireland, of course, doesn’t have a monopoly on regal residents, and you can tick the "good knight’s sleep" box for considerably less elsewhere. Try Germany, for example, where double rooms at Burghotel Auf Schonburg (situated along the Rhine), run from $168 to $223; or Burg Colmberg (on Germany’s Romantic Road, $128-$239) which garners our honorable mentions. My own favourite, though, sits in France—the Chateau de Tennessus (pictured) is ringed by a moat in the Poitou-Charentes region. Guest rooms in this stunning 14th-century property retain original features (oversized fireplaces, arrow slits, broad ceiling beams: you get the picture). Moreover, they are decorated with heraldic designs and handmade replica furnishings which lend an authentic medieval feel that purists will find irresistible. Reaching them via a working drawbridge is the next best thing to time travel. Doubles cost $136-$188.

There are still more options for resting regally for considerably less by entering hostel territory. England, Scotland, and Switzerland have castle hostels; ditto for Holland, which features a 13th-century pair—Castle Assumburg and Castle Westhove. Germany, meanwhile, has over three dozen, including Burg Stahleck. Set in the Loreley Valley overlooking the Rhine (a coveted locale for both castle and wine connoisseurs) Stahleck lists private doubles for just $66. The caveat is such spots don’t deliver the full royal treatment. Exteriors provide great Facebook photo ops; yet inside you’ll typically find limited amenities and Spartan décor.

Since castles were often built on hilltops or other remote locations for defense purposes, accessing them may be tricky if you don’t have a car.

Winding stairwells, uneven floors, and other historical quirks make some castles unsuitable for small children or the physically challenged.

Make sure you’re staying in the actual castle. Some popular ones have added rooms in converted outbuildings newly built wings.

Ask if any part of the castle hotel (or its grounds) is open to the general public. If so, hordes of daytrippers might dampen the magical mood.

Consider the tone. Fairy-Tale Road castles, for example, play up their storybook connections—which is Grimm or grim depending on your taste.

Interested in other options? Try the Castle and Palace Hotels site. Although well curated, its selection is broad in terms of both rates and locations. If you’re only honing in on luxury digs, click Leading Hotels of the World.

For hostels, sift through the selection at Hostelling International-USA or one of the organization’s European affiliates. Looking is free; however, you will need to buy an annual membership for $18 before booking.

Then, Celtic Castles includes links to accommodations throughout England, Scotland, Wales, and Ireland (as well as a few strays in France), plus it contains a handy blog component that highlights special deals and themed events.

Having overdosed on Disney films as a child, frequent Fodors.com contributor Susan MacCallum has a serious castle fixation. When not pretending to be the queen of all she surveys, Susan lives (more humbly) in Halifax, Nova Scotia with her husband and two children.