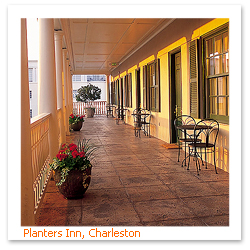 Charleston and Savannah may be sister cities, but according to locals they’re hardly identical twins. One thing is for sure — Southern hospitality rules in both cities. Warm receptions are the rule at the following inns, our favorite spots to check in for a long weekend.

Planters Inn
Part of the Relais & Chateaux group, this boutique property is a stately sanctuary amid the bustle of Charleston’s Market. Light streams into a front parlor with its velvets and Oriental antiques. It serves as the lobby for this exclusive inn, which has both an historic side and a new building wrapped around a two-story piazza. Service is gentile and unobtrusive. Best choice rooms are those with fireplaces, or verandas, four-poster canopy beds, and the newer “piazza” suites with whirlpool baths. 56 rooms, 6 suites. www.plantersinn.com.

Governor’s House Inn
This quintessential Charleston lodging radiates 18th-century elegance. Its stately architecture typifies the grandeur and civility of the city’s bountiful colonial era. A National Historic Landmark, it is filled with family antiques and period reproductions in public and guest rooms. The best room is the Rutledge Suite, a legacy to the original owner, Governor Edward Rutledge. Nice touches include a proper afternoon tea. 7 rooms, 4 suites. www.governorshouse.com. 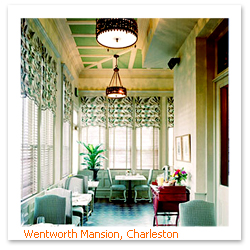 Wentworth Mansion
In 1886, Charlestonian Francis Silas Rodgers built this four-story mansion, whose interior has such luxuries as Austrian crystal chandeliers and hand-carved marble mantles. Guests admire the Second Empire antiques and reproductions, the rich fabrics, and inset wood paneling. In the colder months, the baronial, high-ceiling guest rooms have the velvet drapes drawn and gas fireplaces lighted. Circa 1886, the restaurant, shares the former carriage house with a spa. 21 rooms. www.wentworthmansion.com.

John Rutledge House Inn
This National Historic Landmark has spacious accommodations within the lovingly restored main house (Nos. 6, 8, and 11 are the most appealing). Solid painted walls — in forest green and buttercream yellow — complement the billowy fabrics on the four-poster beds. Parquet floors rest beneath 14-foot ceilings adorned with plaster moldings. Families gravitate to the privacy of the two carriage houses overlooking the shaded brick courtyard. Afternoon tea or port are served in the lounge. 16 rooms, 3 suites.

Two Meeting Street
As pretty as a wedding cake, this Queen Anne mansion has overhanging bays, colonnades, balustrades, and a turret. While rocking on the front porch you can look through soaring arches to White Point Gardens and the Ashley River. Tiffany windows, carved-oak paneling, and a crystal chandelier dress up the public spaces. Two guest rooms have balconies and working fireplaces. Expect to be treated to afternoon high tea. 9 rooms. www.twomeetingstreet.com. 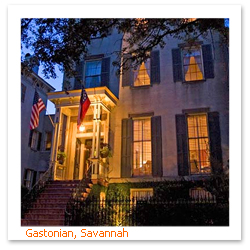 Gastonian
The entire inn, built in 1868, underwent an extensive remodeling in 2005. Guest rooms are lavishly decorated with antiques from the Georgian and Regency periods; all have fireplaces and most have whirlpool tubs. At breakfast you can find such specialty items as lemon cheese or ginger pancakes. Afternoon tea, evening cordials, and complimentary wine are other treats. 14 rooms, 3 suites. www.gastonian.com.

Foley House Inn
Two town houses, built 50 years apart, form this elegant inn. Most rooms have king-size beds, and all have fireplaces and reproduction antique furnishings; four rooms have whirlpool tubs; three have balconies. A carriage house to the rear of the property has less expensive rooms. 17 rooms, 2 suites. www.foleyinn.com.

Ballastone Inn
This sumptuous inn occupies an 1838 mansion that once served as a bordello. Rooms are handsomely furnished, with luxurious linens on canopy beds, antiques, and fine reproductions. On the garden level rooms are small and cozy, with exposed brick walls, beam ceilings, and, in some cases, windows at eye level with the lush courtyard. Most rooms have working gas fireplaces, and three have whirlpool tubs. Afternoon tea and free passes to a nearby health club are included. 16 rooms, 3 suites. www.ballastone.com. 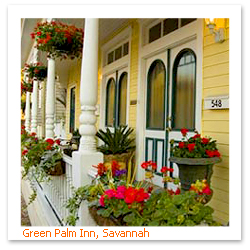 Green Palm Inn
This inn is a pleasing little discovery. Originally built in 1897 but renovated top to bottom, it’s now a delightful B&B. The elegant furnishings of the cottage-style rooms were inspired by Savannah’s British-colonial heritage. All rooms have fireplaces and a couple even have fireplaces in the bathrooms. Breakfasts are generous and served with style, and in the evening you’ll be treated to homemade desserts. 4 suites. www.greenpalminn.com

The President’s Quarters
You’ll be impressed even before you enter this lovely inn, which has an exterior courtyard so inviting it has become a popular spot for wedding receptions. Each room is named for an American president. Some rooms have four-poster beds, working fireplaces, and private balconies. Expect to be greeted with wine and fruit, and a complimentary afternoon tea will tempt you with sweet cakes. Turndown service includes a glass of port or sherry. Breakfast is served in the adjoining 17 Hundred 90 restaurant. Room 204 is said to be haunted by a lady with a broken heart. 11 rooms, 8 suites. www.presidentsquarters.com