Beaches Kaila Yu Do You Enjoy Visiting Hawaii? You Should Pay a Fee
Home  >  News   >   South of France: Walking Through Paradise

South of France: Walking Through Paradise

Provence and the Côte d’Azur are generally charming year-round, but high season brings the hordes. To escape the masses, seek out a backcountry trail where the only thing obstructing your view of hilltop villages and coastal plateaus are fields bursting with red poppies. Here are three walks that deliver the unstintingly beautiful views that brought you to the South of France in the first place. 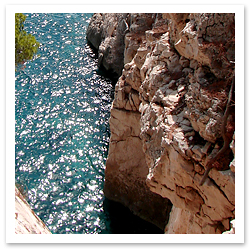 Touring the Calanques, whose fjord-like finger bays probe the rocky coastline, is a must. Either take a sight-seeing cruise in a glass-bottom or hike across the clifftops, which allow access to barely accessible retreats. Or do both, going in by boat and hiking back; make arrangements at the port in Cassis. For specific daytime departure times, contact La Visite des Calanques. (04-42-01-90-83)

Of the Calanques closest to Cassis, Port Miou is the least attractive. It is also the only one fully accessible by car. Calanque Port Pin is prettier, with wind-twisted pines growing at angles from white-rock cliffs. But the real slice of heaven is Calanque En Vau, with its tiny beach and jagged cliffs looming overhead. 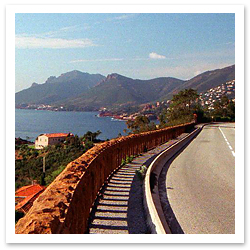 To the east of the twin waterfront resorts of Fréus and St-Raphaël, the Massif de ‘Esterél is pure hiking bliss. Made up of red volcanic rocks and softened by patches of lavender and gorse, its shore is lined with calanque coves and the Corniche de l’Estérel, one of the coast’s most spectacular drives.

This part of N98 boasts several overlooks where drivers can pull off the narrow two-lane highway for a better view of the coast. Some 15 trails strike out from designated parking sites along the way, leading up into the jagged peaks for extraordinary sea views. (Don’t leave valuables in the car—the sites are littered with glass from break-ins.) For trail maps, ask at the St-Raphaël tourist office across from the train station. There is also a sentier du littoral (waterfront trail), leaving from the St-Raphaël port and following the rocky coast all the way to Agay; you’ll see a mix of wild, rocky creeks and glamorous villas. Keep in mind that the Estérel is closed to hikers during July and August due to the risk of flash fires. 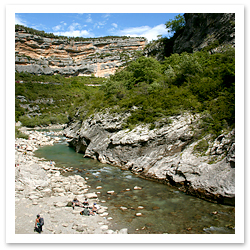 The Gorges du Verdon draws hard-core hikers who are willing to forego the local rosé to keep their wits about them as they tackle France’s answer to the Grand Canyon.

Make sure you’re in shape before you test your mettle along the Sentier Martel—it’s no Sunday-after-lunch promenade. The famous 14 kilometer (9 mile) stretch of the GR4 follows a steep, narrow path flanked on one side by rock wall and the other by nothingness, sometimes passing over loose rubble and sometimes over slick, mossy limestone at a 45-degree rake. And those are the easy parts. One of the trail’s many engineered challenges: a series of wrought-iron ladder-stairs (240, count them if you dare) bolted deep into rock cliff and suspended over the chasm below. The grand finale: two womb-dark tunnels through shoe-deep water, one of them 2,198 ft long. If you’re an experienced hiker, however, you’ll be able to take your eyes off your feet and appreciate the magnificent setting. It is, indeed, one of the grandest canyons in Europe. The Sentier Martel takes anywhere from six to nine hours to complete.

You can arrange a taxi pickup at Point Sublime based on a rough estimate of your own abilities, or leave a car at the final destination and ask a taxi to carry you to your take-off point. Most people depart from the Chalet de La Maline, striking out on the long descent and then working their way back up gradually to the Couloir du Samson and the Point Sublime.

Looking for company on the trails? Several trail-happy backpackers choose the unassuming village of La Palud-sur-Verdon as a base.