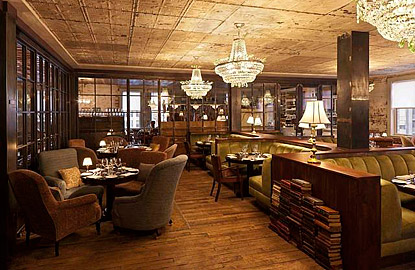 Members of the Soho House can now enjoy the luxuries of the private hotel and club in five new locations including international destinations. Part of the second phase of an expansion plan, the five new houses will be opened over the next two years in locations like Toronto, Mumbai, Chicago, Istanbul, and Barcelona. The houses will keep the Soho House’s trademark luxe features, ensuring a (probably much nicer) home away from home around the world.

The first of the five is set to open this fall. Soho House Toronto, located a block from the King West Theatre district, will occupy a restored 1800s vintage building that housed one of Toronto’s first hotels. Paying homage to the tavern that originally occupied the building, the Pretzel Bell Bar Lounge will feature outdoor seating, a club bar and library, a full kitchen, as well as a partially enclosed rooftop bar and lounge. The hotel will cost the group a reported $7 million.

In spring 2013, Soho House Mumbai will be the group’s first house to hit Asia. This 10 story club and 38-room hotel will sit on Juhu Tara Road on the beach in Mumbai’s Juhu neighborhood, while inside the décor will be a colorful representation of the culture that surrounds it.

Then, set to open in spring 2014, Soho House Chicago will fill a 1907 antiquarian warehouse, originally used by the Chicago Belting Factory, in the Randolph Market area of the West Loop. They plan to keep original facets of the turn-of-the-century building while making sleek upgrades to the 35 rooms, pool, and courtyard.

But wait. The biggest house of them all, Soho House Istanbul will be spread across three buildings in this suddenly-hot destination. The unique ceiling will feature cultural mythological figures and the walls will be lined with frescoes, vintage furniture will line the halls, and

What began as an uber-chic and extra-exclusive club in London in 1995 has been somewhat slow to expand, to Los Angeles, Miami, Berlin, and New York City so far. So this expansion to five international cities in less than two years is quite the full-tilt move. Of course, the group also owns a smattering of popular restaurants, spas, hotels, and other properties around the world.