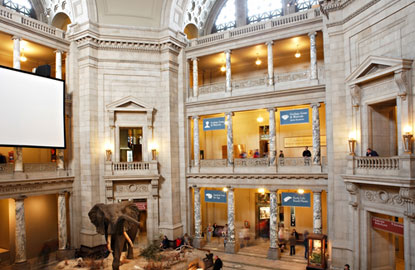 Navigating the largest network of museums in the U.S. just got easier. Forget flimsy paper maps, the solution may be in the mobile device you’re carrying.

Starting Tuesday, Google Maps became available on Androids for the Smithsonian Institution, world’s largest museum complex. Visitors can now use their smartphones to navigate through the gallery maze of 17 museums—2.7 million square feet in all—as well as the National Zoo.

"An increasing number of our visitors now turn to their mobile devices and familiar applications to help them find their way and get information about the Smithsonian," Nancy Proctor, head of mobile strategy and initiatives at the Smithsonian, said in a press release. "Indoor Google Maps helps us achieve our goal of putting the Smithsonian in their hands, both literally and figuratively."

Walking directions were also added for the de Young Museum in San Francisco, Cincinnati Museum Center, Indianapolis Museum of Art, and Philadelphia Museum of Art—one of the largest museums in the U.S. and about to get larger with a Frank Gehry-designed underground expansion opening later this year.

Mobile mapping for several other museums is in the works, including for The Phillips Collection in DC, Museum of Modern Art in San Francisco, Nelson-Atkins Museum of Art in Kansas City, and National World War II Museum in New Orleans.

In 2010, Smithsonian launched goSmithsonian Trek (SCVNGER) on iTunes, a free app that lets visitors engage in an interactive scavenger hunt in nine Smithsonian museums. When the institute partnered with Google on their indoor mapping project, they no doubt assumed iPhone users would benefit as well. But Apple threw a wrench in the works recently when they dropped Google Maps in favor of a new Maps app from Apple. No word yet on whether or not a similar museum mapping system will be provided for iPhone and iPad users.

Fodors.com contributor Cathleen McCarthy has written about culture and travel for The Washington Post, WSJ, Amtrak ARRIVE, Town & Country, and inflight magazines. She covers entertainment and travel deals on her own network, Save on Cities.