News Tina Antwi 'Regenerative Travel' Is the New Buzz Phrase, but What Does It Mean?
Home  >  News   >   SLS Hotel Opens in South Beach 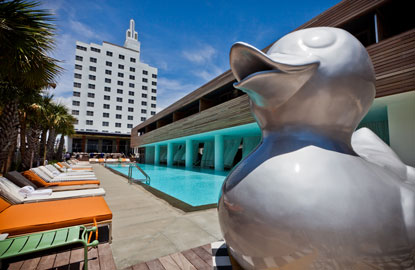 The SLS Hotel in Beverly Hills has been a mainstay on the LA circuit since it opened in 2008. And earlier this month, Miami’s South Beach got its own fabulous outpost when the SLS Hotel South Beach opened its doors. The company’s first hotel on the East Coast debuts at the site of the former Ritz Plaza Hotel, and is the collaborative work of such marquee names as Phillippe Starck, Jose Andrés, Master Sushi Chef Katsuya Uechi, and Lenny Kravitz.

With 140 chic guest rooms—130 of which are located in the historic main tower—and ten villas, the SLS Hotel South Beach blends Latin, Asian, contemporary, and art deco influences to bold effect, and adds the latest technology like in-room iPads complete with a customized SLS Hotel South Beach application, and flat screen TVs to the amenities list. While Philippe Starck’s vision is expressed throughout the property, the Tower Penthouse and Villa Penthouse looked to Lenny Kravitz for inspiration. The top floor Tower Penthouse takes in sweeping views of Miami Beach and nods to the Art Deco architecture of Miami’s past in terms of design, while the Villa Penthouse is more modern with leather, mirror, and metal accents.

The party at the SLS Hotel South Beach will center on Hyde Beach, and the Hyde nightlife brand. With 8,000 square feet of indoor and outdoor lounge amenities surrounding two pools, Chef José Andrés’ cuisine will be served all-day, alongside a creative menu of cocktails. Private poolside cabanas will offer such added luxuries as manicures, pedicures, and poolside massages.

Speaking of food, the SLS Hotel South Beach has got the goods. First, directly off the dramatic lobby is The Bazaar by Jose Andres, which mixes classic Spanish styling with influences from Miami’s Latin flavors. Also on property is the eighth outpost of L.A.’s beloved sushi temple Katsuya. Chef Katsuya Uechi infuses traditional Japanese sushi and robata with modern and playful twists, all complemented by a sake tower in the center of the restaurant.

To celebrate the opening, SLS Hotel South Beach is offering a "Start Living Sexy" introductory package available through October 31, 2012. Including 15% off the best available rate, complimentary room upgrade, and a complimentary food and beverage experience at Hyde Beach, check out SLSSouthBeach.com, or call 888-606-1595.