News Apeksha Bhateja It's a Tie: The 2 Most Annoying Airline Passenger Behaviors of 2022
NewsSketchy Schemes Tourists Should Avoid

No matter how smart you are at home, you can be an easy mark for small-time scammers when traveling. Here are a few of the common tourist rip-offs we’ve encountered on our travels, along with some tips on how to avoid canny connivers. Share your experiences and tips in the comments below. 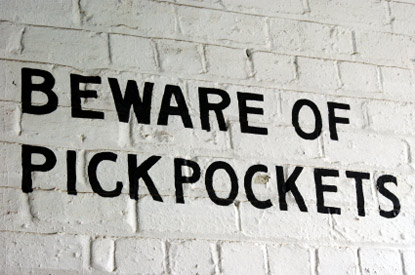 Look (Very) Alive: Pickpockets work the same way magicians do, by diverting your attention. Be wary if you’re bumped or jostled in a crowd, if someone helpfully points out that you have some strange substance on your back, or if people in front of you drop to the sidewalk in a faint or approach you with a flower, a map, or a baby. While they’re catching your attention with something bright, shiny, or horrific they’re also getting into your pockets. If you’re in a crowd, keep your hands on your money belt or wallet in situations where you’re being crowded. Don’t worry that it will alert thieves to your cash’s location — they already know. But being hands-on with your belongings makes it clear that you’ll notice if anyone tries to lift your cash.

Mind the Meter: Most taxi scams revolve around overcharging tourists. Check the meter when you first get into the cab to make sure it’s at the zero rate, make sure the driver turns it on when you head off, and then watch to ensure that the meter total is corresponding with the posted per-kilometer or per-minute rate. If you notice the meter is “broken,” speak up right away and agree on a set fare to your destination, but remember to make this agreement before you’re too far away from a place where you can easily grab another cab. Taxi rip-offs can occur anywhere in the world where cabs are in use. You’re less likely to run into hassles if you take licensed cabs rather than gypsy cabs.

A Likely Story: Travelers, especially those in Southeast Asia and India, may encounter taxi drivers who insist that the place you want to go is closed due to some sudden calamity or is overpriced, filthy, or overbooked. But no worries, he can bring you to some place far nicer and less expensive. Just say no — chances are good that your driver is getting a commission from the place he’s trying to take you to, and its prices will be especially inflated for the tourist trade. If a driver tells you he wants to stop somewhere to call and confirm your hotel booking, tell him you called right before you left the airport and confirmed.

Hard to Digest: Don’t assume that anything plunked down on your table — bottled water, celery sticks, bread — is free. Eat it if you want, but don’t be surprised if you’re billed for it. And be wary of places where the waiter or owner says the chef wants to cook a special meal just for you. Decline politely, say you’re dying instead to try a particular dish, or plead special religious dietary constraints. Always check the bill carefully. Look for mistakes like incorrect taxes, unordered items, an extra zero that somehow slipped in to the total. Also look to see if the gratuity is included. You might opt to round up the bill, but don’t get tricked into paying a double tip. Ask questions if there are charges that you don’t understand. Restaurant scams and overcharges can happen anywhere.

The Big Switch: If you’re buying a local specialty item — oriental rug, jewelry, artwork — do your research first and know what the item should cost and how to determine if it’s the real thing or a fake. Then check your guidebook or the local tourist board and see what stores they recommend you patronize. The most commonly reported shopping scams concern the sale of fake gem stones (South East Asia), antiques (The Middle East, particularly Egypt), and bogus designer products like handbags, leather coats and scarves (these are found in flea markets and sidewalk vendors everywhere, but particularly in big U.S. and European cites).

Shipping Scams: If you’re buying heavy or fragile items you may want to ship them home instead of schlepping them yourself. It’s a good idea, except that sometimes the item sent to you isn’t the one you paid for. To avoid losing something to this scam, pay for all goods that are being shipped with a credit card, and make sure to hang onto your receipts so you can file a claim with your card issuer if your purchases don’t show up. Check your credit card issuer’s rules on filing claims; you may need to file within a specified time to get a chargeback. And take pictures of your purchase before leaving the store for added insurance. If the shop owner knows you snapped photos, he or she will be less likely to ship you another item instead of the one you purchased. You may encounter shipping-swap scams in the Middle East, Central and Eastern Europe, and Southeast Asia.

Counterfeit Cops: If police officers stop you on the street and ask to check your wallet for counterfeit bills or “drug money” ask them to take you to the police station where you’ll be happy to let them examine the contents of your wallet. Tourists in South America and Mexico have reported being ripped off by bogus cops who manage to palm a couple of bills while searching people’s wallets.

Altered ATMs: Take a moment to check out an ATM machine before you insert your card. Look especially to see if there’s a thin piece of plastic hanging out of the slot that a thief could use to extract your card after the machine eats it. There have even been reports of ATMs with false fronts designed deliberately to collect cards. Use ATMs in banks, established stores, hotels, and other places where it’s unlikely that a thief can creatively modify the machine. Be cautious everywhere when using an ATM, but especially in the Caribbean, South America and Mexico.

Don’t be a Sucker or a Mule

Sacred Scams: At some temples, religious festivals and other sacred spots people may offer to perform a ritual for you and then demand a sizeable donation. You should be prepared to donate a bit of money when you visit such sites, but don’t be too intimidated to ask “how much?” before agreeing to participate in any ritual or blessing. This scam is particularly prevalent in India, where tourists visiting cremation sites are often strongly pressured to make a donation so that poor families can buy the wood needed to cremate their loved ones. Give what you choose to give, but don’t be bullied.

Money for Nothing: If you’re offered cash for performing some simple task like bringing an item back to the U.S., just say no. Internet forums are full of the sad tales of travelers to Southeast Asia who agreed to bring gem stones to someone’s business partner in the States for a cut of the profits, and left a deposit with the stones’ owner as a goodwill gesture. The stones turn out to be cut glass, and the traveler is out their good faith money. This scam is played out in Africa and the Middle East and occasionally Europe with local crafts and other items. If it sounds too good to be true, that’s because it is — it’s a scam.