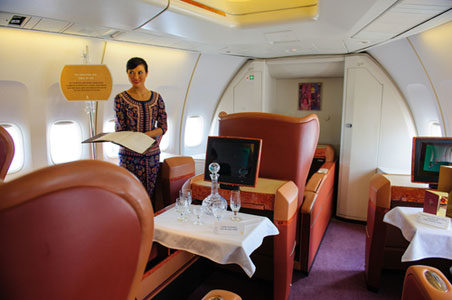 Two of the longest scheduled flights in the world will disappear in the coming months as Singapore Airlines will be canceling their non-stop service between Singapore and both Newark and Los Angeles. These flights are currently served by the carrier’s Airbus A340-500 aircraft. The aircraft are being returned to Airbus as part of a deal announced yesterday for the airline to acquire 25 new jumbo jets from Airbus with delivery expected to begin in 2017. The A345s will be removed at the end of 2013 according to the airline’s announcement.

Singapore Airlines’ CEO Goh Choon Phong noted as part of the announcement, "Although disappointing that we will be halting these services, we remain very committed to the US market. Over the past two years we have increased capacity to both Los Angeles and New York by deploying A380 superjumbos on flights via Tokyo and Frankfurt. We will also continue to explore additional options to enhance our US services."

These ultra-long-haul flights have teetered on the edge of being profitable in recent years due to the significant fuel requirements to operate and the increases in fuel costs that airlines have faced. The carrier has shifted between all business class service and a mix of business and premium economy seats in an effort to make the route work financially. This latest move will allow the carrier to keep their fleet young, something they’ve focused heavily on historically (their last 747-400 was removed from passenger service earlier this year), while also removing the operating cost issues associated with these flights and aircraft.