Coronavirus Esme Fox Spain Is Open to Vaccinated Tourists. So, What Can You Expect This Summer?
Home  >  News   >   Sicily’s Famous Imperial Villa Reopens After Six Years 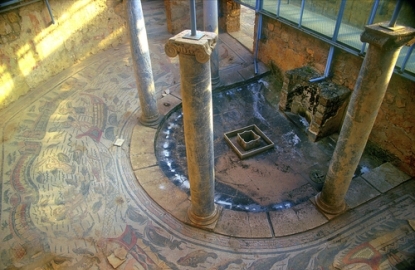 On Wednesday, one of the most legendary archeological sites in Sicily, the Villa Romana del Casale at Piazza Armerina, reopened after a six-year hiatus. During that time, this UNESCO heritage site was painstakingly restored by 50 experts, and at a cost of 18 million euros.

Why that long? Well, if you had 120 million mosaic pieces to individually clean, it might take you some time, too. The team worked on nearly 37,000 square feet of mosaic, which is one of the biggest draw at the well-preserved 3rd-century imperial villa. Additionally, new lighting and an elevated pathway over the mosaic floors was added for observational ease. During the cleaning process, the team made new discoveries, including a columned porch, a spa, frescoes, and an additional 262 square feet of floor mosaics.

The official re-opening took place on July 4, the 15th anniversary of the UNESCO recognition of the villa. In celebration of the event, however, visitors on July 7 and 8 will be able to visit the site for free. Though the renovation effort cut into the number of tourists to the site, in a statement to the press, Regional Assessor for Cultural Heritage and Identity of Sicily Sebastiano Missineo set the new goal for visitors initially at 500,000 by next year, and 800,000 per year by 2015.

If you happen to not be in Sicily this week, not to worry. The rest of the year, a ticket only costs 10 euro. The ticket office is open from 9–6 (gates close at 7 pm) between end of March and end of October, and 9–4 (gates close at 5 pm) from end of October to end of March. Further information regarding the renovations is available at the villa’s blog and at villaromanadelcasale.org, though the text is in Italian only.