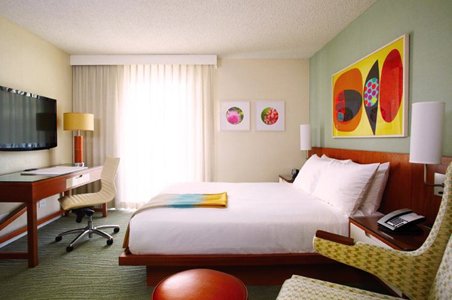 Bustling Waikiki Beach in Honolulu recently welcomed a new boutique hotel: the Shoreline Hotel, boasting a vibrant, very chic design that’s as crisp as the nearby shoreline (two blocks away). Think 1970s meets the digital age, with geometric art hung on walls painted in calming hues and paired with bright, natural lighting and light-colored wood furnishings. It’s a definite departure from the area’s many large resort-style hotels yet it’s only a block from Kalakaua Avenue, the heart of Waikiki Beach, which hugs the beach on one side and is jammed with restaurants and shops (from luxury designers to quirky Hawaiian) on the other.

Inside the former Seaside Hotel Waikiki is this Joie de Vivre-opened property with 135 rooms spread across 14 floors. Although there are eight room categories, each room offers free WiFi, a work desk, and a flat-screen television with many cable channels. Ask for one of four suites on the top floor and you’ll be granted a view of both the ocean and Honolulu’s skyline. For a bite of Mexican and Caribbean fare, drop into Cha Cha Cha, the Shoreline Hotel’s eatery. Best known for dishing up large-size portions—like the Jamaica Me Crazy enchiladas or Tostada del Caribe topped with jerk chicken—the cocktail list is just as eclectic. A staggering list of 30 tequilas is also on the menu.

Interior designer Anthony Laurino also employed colors inspired by the Art Deco movement, such as seafoam green and tangerine, and arranged for nature photography by local Michele McCarthy and custom furniture by Eric Brand to be in each room. Upon arrival in the open-air lobby, each guest is greeted with a lei.

In honor of the new hotel, a grand-opening rate of $159 per night is available on some dates. Normally rates begin at $195.