News Apeksha Bhateja What Are the Chances You'll Get Monkeypox at a Hotel?
NewsSheraton Macau is the Year’s Largest Hotel Opening 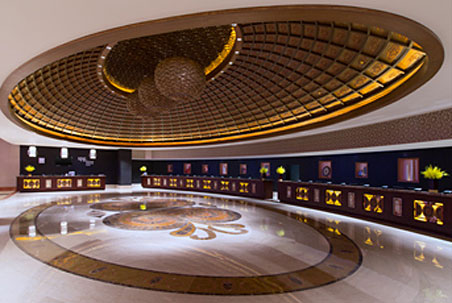 From casinos to restaurants, most everything in Macao is of an enormous, glittering scale. Its newest hotel—Sheraton Macao Hotel, Cotai Central, the largest property worldwide to open this year—is no exception. (It’s also the largest hotel in Starwood Hotels and Resort’s portfolio.)

Open since late September, the hotel—once its complete in early 2013—will feature 3,896 rooms within two slick towers that overlook the crown jewel in that region: the Cotai Strip development, which features casinos, duty-free shopping, designer-label boutiques, live shows, and restaurants, with the gaming estimated to generate four times the revenue of Las Vegas. It’s the only place in China with casino resorts due to strict gaming laws. To keep up with the heavy tourism, staff at the hotel speak a mind-boggling 19 languages combined.

Yet it’s also a family-friendly property with suites that cater to families (stocked with children’s books and bedding, as well as a play area) and access to two of the hotel’s three outdoor pools. The hotel’s Kids Program keeps the little ones happy with supervised activities such as scavenger hunts, pool games, and crafts, as well as Wii and Nintendo systems. At the Kids Club is a play area for toddlers marked by a bounce house, ball pool, and climbing equipment. 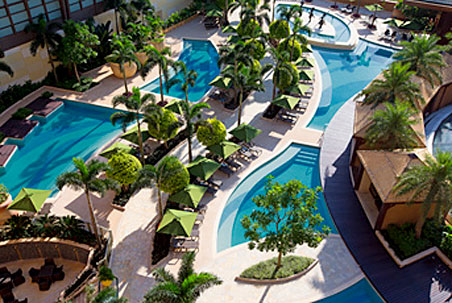 Sheraton Macao Hotel, Cotai Central, is poised to be a major player in the region’s entertainment offerings for adults, with a ballroom the size of 11 basketball courts; the world’s largest Sheraton Club Lounge (13,000 square feet); four restaurants (Bene, Italian fare; Xin, traditional Asian cuisine; Feast, all-day dining with a World of Flavors buffet option; and Palms Lounge (high tea, all-day snacks and cocktails); a shopping mall; and poolside dining at each pool. The Tiki Pool is adults-only; sink into one of 18 luxurious cabanas with their day beds and ceiling fans for the ultimate in pampering.

Opening in two phases, what rolled out in the September opening includes Sheraton Sky Tower (with 1,829 rooms, the Sheraton Club Lounge, the ballroom and meeting space). Also in the tower are Sala Pool (a wading, family-friendly pool with eight private cabanas featuring day beds), Shine Spa (with 15 treatment rooms and services focused on Feng Shui elements), and a fitness facility that features new, exclusive programming for the Sheraton brand. Early in 2013 the second tower (Sheraton Earth Tower) will open its doors, introducing 2,067 more rooms and two more outdoor pools.