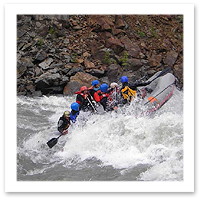 For travelers seeking thrills on their next vacation, sunbathing and theme park-hopping simply won’t do. These folks crave heart-thumping adventure trips that get adrenaline pumping and lungs working. Here are eight ways you can do it.

White-water rafting
Many thrill-seekers say the best summertime white-water rafting in the contiguous U.S. is on the Snake River, through a place called Hells Canyon. Here, on the border of eastern Oregon and western Idaho, warm water (up to 70 degrees) froths over the edge of inflatable rafts as they speed through rock chutes and circle in river eddies. Most of the rapids are Class III and IV. Try the three- or four-day trips with Hells Canyon Raft, an outfitter that provides all gear (including tents) and guides, who set up open-air, riverside kitchens and prepare elaborate feasts of blueberry pancakes and bacon every morning. Prices start at $970.

For a more remote experience this summer, head to western Canada and raft the Tatshenshini River in Kluane National Park. Half-day trips with family-owned outfitter Tatshenshini Expediting (photo, above) head down the upper “Tat” through Class II and III rapids with names like Splat Rock. On the descent, after a brown-bag lunch provided by the outfitter, look out for Grizzly Bears lolling in the riverside brush — the surrounding open space is home to one of the largest bear populations in the world. Price: $125. 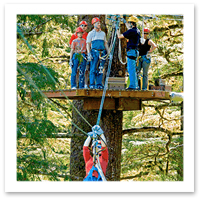 Ziplining
Gravity is central to ziplining, a relatively new sport that sends adrenaline junkies zooming on a pulley down a cable mounted on an incline. Summertime cruise passengers to Alaska can take half-day excursions from Ketchikan with Alaska Canopy Adventures, (photo, right) where a custom 4×4 vehicle takes guests up the side of a mountain to giant spruce trees bordering the Tongass National Forest. Visitors climb a 135-foot platform, don harnesses, and the zipline across the rain forest canopy. Most of these rides last mere seconds, but “Ben’s Revenge” is a heart-throbbing 60 seconds. The three-hour trip ends with a complimentary salmon jerky snack. Prices start at $115.

Whistler, British Columbia, is home to some of the longest and fastest ziplines in North America. On one of five cables in the Ziptrek Eco Tour, warm-weather visitors speed more than 1,100 feet across the rushing waters of Fitzsimmons Creek. Later, guests walk from one towering conifer to the next across suspension bridges that span the chasm between Whistler and Blackcomb mountains. Total tour time is 2.5 hours. Price: $98 (in U.S. dollars).

Shark-viewing
Anybody who has seen the 1975 movie Jaws understands the power and fury of Great White sharks. Autumn visitors to Mexico’s Guadalupe Island, off the west coast of Baja, California, can experience these frightening fish up close — inside an underwater cage made of reinforced steel. On a six-day excursion aboard the Nautilus Explorer, adventurers don scuba gear and hang out in the cage, waiting for sharks to inspect a slick of chum that crew members use for bait. Trip price includes fresh crab and fish for dinner every night. Prices start at $2,385.

For those who’d rather not worry about passports, Incredible Adventures offers full-day shark-viewing trips every winter to the Farallon Islands outside San Francisco Bay. The water here is frigid, but outfitters provide wet suits. From the safety of an underwater cage, guests suck oxygen from a hookah system (no scuba gear) and spend hours staring through the murky ocean as the sharks feast furiously on elephant seals and other marine mammals. On the journey home, the ship speeds under the Golden Gate Bridge — a great end to an unbelievable day. Price: $875.

Spelunking
Spelunking might as well be the regional pastime in the American Southwest, where centuries of geological evolution have formed thousands of limestone and gypsum caves. Spelunking is the art and sport of cave exploration. One of the most popular spots for organized spelunking in summer is Carlsbad Caverns National Park, near Carlsbad, N.M. Here, park rangers lead half-day tours through an 8.2-acre underground ballroom known as the “Big Room,” where guests crawl on their elbows through dark areas that are off-limits to self-guided guests. The three-hour tour inches past rock stalagmites and stalactites into areas with names like “Hall of the White Giant” and “Spider Cave.” Claustrophobes should think twice before signing up. Price: $26.

East Coast spelunkers can satisfy the cave-exploration itch at Mammoth Cave National Park, outside Mammoth Cave, Ky. The area, with its limestone caves, underground rivers, springs, and sinkholes, is known as a karst landscape. The “Wild Cave Tour” is a six-hour, five-mile trip that snakes through small openings and tight holes before reaching Cathedral Domes, a dramatic series of vertical shafts. The journey ends after climbing a slick rock known as the Frozen Waterfall. Helmets and kneepads are provided, but lunches and water are not. Sorry, Hulksters — participants must have a chest size of no more than 42 inches. Price: $45.