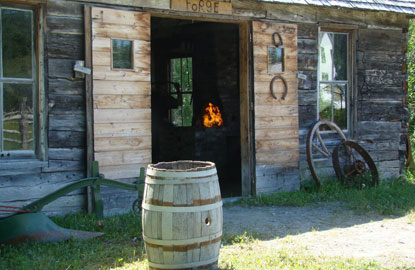 The residents of the province of Quebec are, shall we say, quite proud of their French heritage and the uniqueness of their region. The deeper you get into Québec, the harder it can be to even find someone who speaks English. And that’s part of Québec’s charm and character. So it’s surprising to find, in this bastion of Francophilia, a town completely devoted to Québec’s British heritage.

Located on Duthie’s Point and part of Québec’s stunning Gaspé Peninsula, the Gaspesian British Heritage Village is right on the Bay of Chaleur. The property stretches 82 acres, and features actors in period costumes representing roles like Village Blacksmith along with 24 historic buildings and walking paths that lead to one of Gaspé’s many charming lighthouses and a beach. The focus is not only on the British settlement of Gaspé, which began around 1784 when Loyalists arrived from across the pond, but also on the variety of peoples who settled the area—Mi’gmaq, Acadian, and British. Organized family activities and Traditional Skills Days help bring children closer to history—you can build an outdoor bread oven!—and a tea room provides light fare and refreshment.

The Heritage Village is also host to Québec’s only bluegrass festival. From August 26 through September 2, the New Richmond Bluegrass Festival brings together over 50 bands on three stages. Interested in staying for the whole fest? Purchase a VIP or weekend pass to get free camping (no services) on site for the entire week.

Plan to spend at least a few hours here, especially if you want to explore all the buildings. Self-guided tours (with map) are available, and guided tours are offered daily at 11 am and 2 pm. The site is open daily through September 2 from 10 am to 5 pm, with admission available by arrangement after. Admission is $8 for adults with discounts for children.