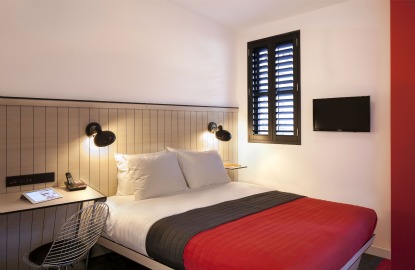 Manhattan’s most affordable concept hotel has announced its second Pod—named Pod 39 for its location on 39th Street between Lexington and Third Avenues—will open on June 10 and is already accepting reservations online. Like the original Pod 51, the new hotel follows the same winning formula: cheap rates (by NYC standards, anyhow), starting from $119/night; small but slick accommodations; and happening communal spaces. (Interesting tidbit: The original Pod hotel is reportedly the most profitable hotel on a square-foot basis in New York City.)

Ornate features from the original structure, like terra-cotta floors and columns, and sweeping brick archways, have been left intact, while techie flair has been layered on top (including a video screening wall and two "interactive walls" chockablock with iPads).

No two rooms at the new Pod are exactly the same, but all 367 come with en suite bathrooms with frosted sliding-glass doors and subway-tiled walls, shiny modular furniture and storage cubes, midcentury modern-style fixings, and techie perks like media hubs, mounted flat-screen TVs, and the like. Pod 39 will also feature a 17th-floor rooftop lounge with stellar city views and a taco joint. Rates start from $119/night; www.thepodhotel.com.

Thinking about a trip to New York City?