Coronavirus David Silverberg Are Your Kids Heading Back to Summer Camp? Here's What You Need to Know
Home  >  News   >   12 Memorable Meals in New Orleans: Locals and “Top Chefs” Share Their Favorites 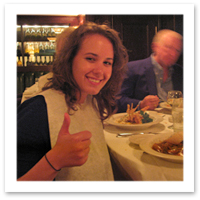 Crawfish beignets, shrimp gumbo, oysters served every way imaginable; if you’re looking for a food-focused vacation, New Orleans definitely delivers. But with so many delicious restaurants to try, where should you start? I attended the Wine and Food Experience and asked locals and industry insiders—including Top Chef Season Fivefinalists, who were in town to cook for the expo—about their best Big Easy dining experiences. For me? I have to go with the barbecued shrimp at Mr. B’s in the French Quarter. Conveniently served with a bib.

Lüke, Central Business District. “I had one of the best breakfasts of my life. It was grits with shrimp and poached eggs, it was phenomenal.”

Deju Vu, French Quarter. “I had fried pickles and this thing called a Cajun meat pie, which is one of the best things I’ve ever eaten in my life. It was like a Cajun empanada.”

Pierre Masperos, French Quarter. “Their chicken andouille gumbo is really good and they have the best Bloody Marys.”

Café du Monde and Central Grocery, both in French Quarter. August, Central Business District. “[John Besh of August] brought out these crawfish and he did them French style with black truffles and cream and it was amazing.”

Ziggy “The Wine Gal” Eschliman, Sommelier to the Stars

Lucky Dogs, French Quarter, and Cochon, Warehouse District. “I think one of the best experiences I’ve had is walking with a glass of champagne in the French Quarter and going after a Lucky Dog. If you’re budget conscious, it can’t get any better than that. Cochon to me exemplifies all things that are New Orleans but on the cutting edge. They have such amazing farm to table entrees there.”

Byblos Market, Metairie. “While it’s not an unusual selection of items, it’s just amazingly fresh and carefully made.”

Café Maspero, French Quarter; Dante’s Kitchen, Uptown; Lee’s Hamburgers, Metairie; Bud’s Broiler, various locations. “The best muffuletta we’ve had—we’ve had them all over the city, we’re hunting for the best one—was at Maspero’s. We like the brunch at Dante’s, they have great crab omelets and grits. Lee’s Hamburgers and Bud’s Broiler have the best hamburgers in the city. The best.”