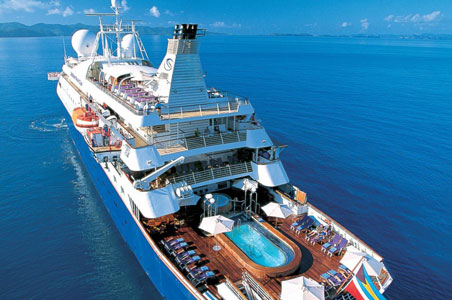 In 2014, SeaDream Yacht Club will sail one of the earth’s least explored corners: Papua New Guinea in Melanesia. The company’s mega-yacht, SeaDream II, will embark from Cairns, Australia, on February 1 with 112 diehard explorers onboard. The 14-night journey will call on diverse ports in Papua New Guinea, including Alotau in Milne Bay, Kitava in the Tobriand Islands, Tami Island, and the Watam Village along the Sepik River. The second half of the voyage is devoted to Indonesia with stops in Jayapura, Banda Neira in the Moluccas, Larantuka, Komodo Island, and Bali.

Papua New Guinea, situated in the southwestern Pacific Ocean spanning part of New Guinea and a series of nearby islands, has long captured the imagination of westerners. The country’s 6.3 million residents live a very traditional lifestyle in villages where subsistence farming is a way of life. In fact, Papua New Guinea’s constitution promises the protection of these organic societies. That’s led to a very diverse population with tribes speaking more than 830 languages. Despite its allure, few tourists visit PNG because it’s just not easy to get there. One of the best ways to access the varied destinations within the country is by small ship. And the agile SeaDream II can access the most remote harbors and bays. The company felt it was a no-brainer to add a PNG voyage to its schedule while the ship spends time in Southeast Asia in 2014.

While the culture of each village in Papua New Guinea is unique, the country’s topography is even more diverse. SeaDream’s expedition team plans to showcase that diversity—mountains and volcanoes, tropical rainforests and wetlands, and pristine beaches—during this unique voyage for SeaDream II.

Well-known wildlife photographer Sue Flood is the special guest aboard this two-week South Pacific cruise. In addition to documenting the expedition, she will freely share her advice for getting those "money" shots.

Highlights of the voyage include snorkeling and diving, bird watching, hiking, and exploring sites that were significant during the battles of World War II. SeaDream’s expedition leaders will introduce guests to Papua New Guinea via the ship’s fleet of nimble Zodiacs. Passengers will access remote landing zones and experience a civilization that’s remained virtually unchanged over the years. Per passenger cruise fares for this adventure start at $9,999.

SeaDream II will sail a series of 17 voyages in Asia from October 2013 through April 2014. Itineraries include Myanmar, Thailand, India, China, Vietnam, Indonesia, Northern Australia, and Malaysia.