Coronavirus Leila Najafi Want to Stay in Costa Rica for Over a Year? A New Law Might Help You
Home  >  News   >   San Francisco’s Coolest Cocktails

Thai basil, persimmon, and paprika are just a few of the palate-teasing ingredients appearing in artisanal cocktails at restaurants throughout San Francisco. Taking their cues from the kitchen, bar chefs and mixologists in the city are increasingly reaching for fresh-squeezed juices, just-ground spices, and muddled herbs instead of sugary syrups and pre-packaged mixes. With bartenders searching out organic ingredients, visiting farmer’s markets, and sourcing locally produced spirits, the city is fast emerging as a top cocktail destination. Here’s our pick of restaurants with buzz-worthy cocktail menus — your “choice table” may well be at the bar!

Coco500
At this South of Market Mediterranean hot spot, hand-crafted cocktails invite lingering at the teak-and-blue Italian glass-tiled bar. “We get our inspiration from the kitchen and focus on creating food-friendly cocktails,” says Aaron Smith, assistant manager at Coco500. In this spirit, The Walrus and the Carpenter, a refreshing aperitif of potato vodka, cucumber, lemon slices, and parsley, was custom-designed for oysters. And the Blood Orange Old-Fashioned is recommended with braised beef cheeks. Worth trying on for size: The Little Red Dress (fresh-squeezed orange juice, Meyer lemon, and organic vodka served in a champagne flute and topped with a sparkling rosé wine), or Persephone’s Slip (fresh-squeezed pomegranate juice and gin, drizzled with lemon oil and zest). 500 Brannan Street. 415/543-2222. (photo, top) 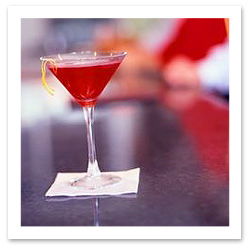 Range
Innovative, seasonally inspired specialty cocktails drive the white-hot bar scene at Range, a new restaurant in the Mission District. “The under-50 crowd seems receptive to having fruit, savory herbs, or hot peppers in a cocktail,” says Cameron West, co-owner of Range. Depending on the month, yellow watermelon or Sun Gold tomatoes can wind up in your drink. The end result? An amazingly “balanced cocktail that is not super-sweet,” West says. To wit: Harmony, a colorful blend of pear and green tea-infused gin, lemon juice, Lillet Blanc, and chartreuse liqueur. And the eye-catching Fickle Fox, featuring muddled huckleberries, gin, and lemon juice. 842 Valencia Street. 415/282-8283. (photo, right)

Town Hall
Like the food, classic “down home” cocktails get an updated, artisanal twist at Town Hall, a hip New Orleans-inspired restaurant in SOMA. Bitters, liqueurs, house-made syrups, and garnishes (all made by the pastry chef) are star ingredients. Signature hits? According to bartender Christa Manalo, gender usually predicts preference. Men favor darker spirits-based cocktails, like the Sazerac (aged Kentucky rye whiskey, bitters, and Herbsaint, a New Orleans-produced anise-flavored liqueur) or The Big Easy (gin, Cointreau, lemon juice, and bitters). Women tend toward the fetching Dorothy Parker, with its dollop of Chambord and float of sparkling wine, or the Town Cooler, a playful take on a mojito, with mint-ginger syrup and a crown of ginger beer. 342 Howard Street. 415/908-3900.