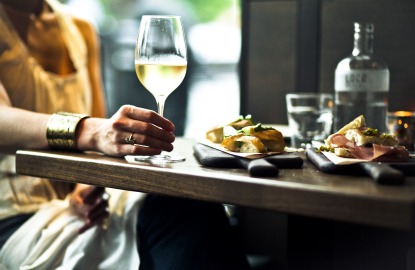 San Francisco‘s ever-evolving restaurant scene has ensured it’s a mainstay on the map for foodie-minded travelers. With culinary accolades that today extend far beyond Bay Area-fixture/epicurean goddess Alice Waters, we’ve set out to round up a cutting-edge culinary tour that incorporates five foodie hot spots, all of which have debuted within the last year and a half.

Located in one of San Francisco’s most storied restaurant spaces bordering North Beach’s pretty Washington Square, Park Tavern has rapidly emerged as the neighborhood’s hottest spot since its September debut. From the same ladies behind local favorite Marlowe, expect polished, vintage-chic style décor in the 100-seat eatery, which scores high points for creative takes on classic bistro dishes, along with sophisticated cocktails served at the lively, full bar. The menu is larger and more seafood-based than Marlowe (though it does feature some Marlowe staples on the menu, like its heralded burger), and also comes with a seasoned wine director (Casey Doolin), imported from Blue Ribbon Brasserie in New York.

The fourth and latest endeavor by the power couple behind Delfina, Locanda, a trendy, Roman-inspired restaurant that debuted in the Mission last spring, draws on a variety of classics, from perfectly executed house-made pastas to more adventurous offerings like tripe and lamb’s tongue. Roman favorites like oxtail stew and lamb scottadito sit side by side with California-influenced snapper and smoky pork chops. With one of San Francisco’s hottest young chefs in the kitchen and an elegant cocktail list lending to a trendy late-night bar scene, Locanda has already made its name as one of the most desirable reservations in town.

When the husband-and-wife team behind San Francisco’s Michelin-starred Quince opened Cotogna in November 2010, a more affordable and low-key sibling offering similarly artful Italian cuisine, it immediately became the city’s food critics’ darling. With a slightly more rustic vibe and California-inspired menu, this Jackson Square destination has Italians scratching their heads at how Chef Michael Tusk beat them at their own game. The pastas are a specialty here, but don’t skip the pork if it’s on the menu. Desserts come from a French Laundry alum and the wine is an innovative prix-fixe model, with all bottles $40.

Benu, the Asian-inspired restaurant by French Laundry’s former chef de cuisine, opened in August 2010 to great fanfare. With a minimalist aesthetic, Corey Lee’s brainchild in SOMA hasn’t disappointed, despite the high expectations and prices: It’s already earned two Michelin stars and made its way into practically every discussion of the country’s best restaurants. The only option on Fridays and Saturdays, the regularly updated $180 tasting menu lets you sample such flavors as uni, sea cucumber, and black truffle.

Not-to-Miss Dish: Benu’s faux shark fin soup has registered as a favorite on the palettes of some of the world’s top chefs.