While more and more U.S. cities surrender their identity to uniform development, San Antonio avowedly remembers its past without getting stuck in it. For your next budget-friendly escape, consider an antidote to Anywhere USA with the city that consistently provides a sense of place—even, or especially, at its most-visited attractions. 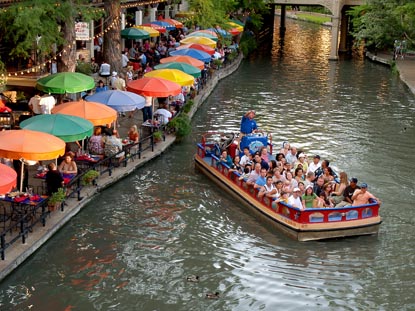 I’ve been to few tourist enterprises that match the success of the River Walk at hiding commercialism in plain sight. Once a source of water of the Spanish missions, the narrow 4.3 mi canal today is a beguiling confluence of consumer contrivances, art installations, and habitat restoration. Even at its bustling core—the River Square and South Bank sections—where trendy restaurants, shops, and hotels crowd its banks, you don’t feel like a common traveler. You simply feel that you’re in a special place with great food and drink. On weekend nights, population density doubles and moderate jostling takes the place of leisurely strolling. Even so, the level of rowdiness that’s often on display in typical bar-rich locales is, for now, much more restrained here. Tip: For a more tranquil evening, take a sunset cruise downriver through the new Museum Reach—a surreal journey through captivating art such as "Shimmer Field." This recently developed section is just a small part of the River Walk’s expansion. By 2013, the Mission Reach will link the river to four of the five Spanish missions, adding 15 mi of walking and biking trails. 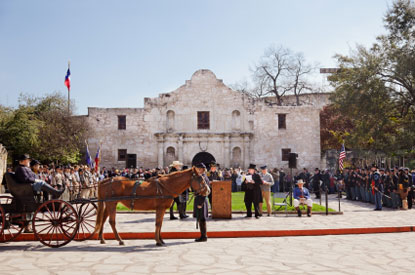 Of course, San Antonio’s most iconic tourist attraction, the Alamo, defies exploitation. (Its proud stewards, the Daughters of the Republic of Texas, simply would not allow it.) This year marks the Alamo’s 175th anniversary, and every month there are events to commemorate the storied past of this monument (indeed shrine) to independence. Whether you’re a history buff or not, it’s a fascinating sight and the reenactments are heartfelt. VisitSanAntonio.com has a full calendar, including special 2011 events.
Beyond downtown San Antonio’s main attractions, the local color only increases. In the 19th-century German-settled King William District you can gape at grand Victorian homes and gobble down-home biscuits and gravy at the Guenther House. At San Antonio Missions National Historic Park, where those four 18th-century Catholic missions are currently linked by the 12-mi Mission Trail, you can step inside the ancient churches that are an integral part of San Antonio’s origins.

Two hotels, one old(er) and one new, maintain a sense of place in downtown San Antonio. Since its 1859 opening, the legendary Menger Hotel has lodged, among others, Robert E. Lee, Ulysses S. Grant, Theodore Roosevelt, Oscar Wilde, Sarah Bernhardt, Roy Rogers, and Dale Evans. Business and pleasure converge in one continuous flow at the Hyatt Regency San Antonio. How, you may ask, does a Hyatt deliver a sense of place? Request an Alamo-facing room, part the curtains, and behold a glorious view that you are sure to (wait for it) remember.