Sailing the Scenic Diamond Down the Danube 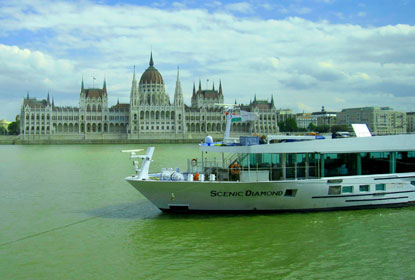 Earlier this month, I set off in a spaceship down the Blue Danube. True story (kind of). Let me elaborate.

Just getting my feet wet on the European river cruise circuit, I wasn’t sure what to expect of the Danube other than it being blue, which, thanks to Strauss’s misleading waltz ("The Blue Danube"), even that proved off-base (the river is a murky green). No matter—the Danube delivers a colorful adventure all its own. This ancient trade route and European lifeline, lined with historic cities and jewel-box villages, is one of the most enriching and enchanting sailing destinations in the whole of Europe.

As for the "spaceship" factor, that came in the form of the 169-passenger Scenic Diamond—so-named as the result of a clever marketing ploy by Australia-based Scenic Cruises. To avoid disappointment, keep in mind that the designation refers to the line’s new class of "Space-Ships," which are promoted as being generous with their onboard "space," if not particularly well-suited to intergalactic voyages.

While cruisers used to larger ocean vessels, like myself, may not find Scenic’s river cruise ships to be all that remarkable in the spacious digs department, they will quickly discover that the line’s real strong suit is its wonderfully all-inclusive pricing, which translates to multiple daily shore excursion options, nearly all onboard beverages (including wine and beer with lunch and dinner), ground transfers, and all gratuities for staff and local guides bundled right into the upfront rates. And in 2013, Scenic will up the ante on its all-inclusive experience, providing unlimited complimentary beverages throughout the day (though some top-shelf brands will carry a surcharge), free WiFi, and private butler service for each and every guest. 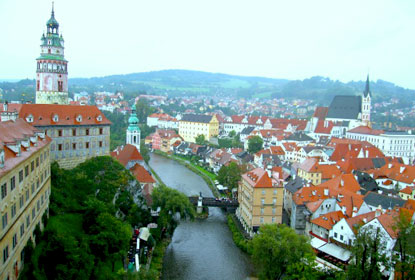 But with choice, comes dilemma. On my 7-night "Gems of the Danube" sailing between Nuremberg, Germany, and Budapest, Hungary, an excruciating excursion pick had to be made in the port of Passau, Germany, where we could have spent the day touring the pretty Bavarian town itself; Salzburg, Austria, the birthplace of Mozart and the setting for The Sound of Music; or, the medieval fantasyland of Český Krumlov in the Czech Republic. I opted for the latter, effectively allowing me to enjoy breakfast in Germany, lunch in the Czech Republic, and dinner in Austria (upon meeting our ship again in Linz)—true bragging rights for any manic world traveler. 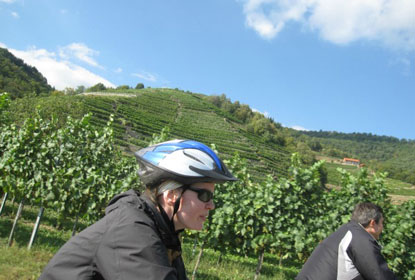 The ship also keeps a fleet of bicycles aboard, free for guest use. A highlight of my trip was a guide-led 20-mile bike ride through an enchanting stretch of the Danube in Austria’s Wachau Valley wine region. 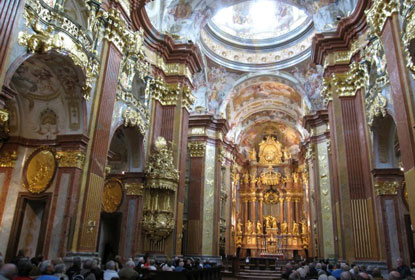 Scenic Cruises also offers culturally focused "Scenic Enrich" experiences, which on our sailing translated to an organ recital in Melk, Austria’s, magnificent Benedictine Abbey, and a private concert at Vienna’s elegant Palais Liechtenstein, featuring the music of Strauss and Mozart.

The itinerary’s grand finale was in Budapest, where our mooring spot across from the city’s iconic Parliament building delivered up a view no hotel could rival. Excursion options in the Danube-straddling city focused on their famed thermal baths, classical music, or underground cave system, while a particularly pleasant late-summer evening gave way to a memorable evening sailing, where guests gathered on the deck to survey Budapest all set aglow.

Onboard, most of Scenic Diamond’s modern boutique hotel-style staterooms—starting from a rather snug 160 square feet to more roomy 315-square-feet Royal Suites—came with full balconies large enough to accommodate two chairs and a table (a relative rarity for river cruise ships). All rooms offered flat-screen satellite TVs (with on-demand movies), individual climate control, ample wardrobe storage, beds trimmed with Egyptian linens and your choice from a pillow menu, minibar, laptop-size safe, Nordic Walking sticks, and bathrooms lined with L’Occitane amenities. Guests staying in suites or on the Danube Deck could also enjoy butler service and extras like shoeshine service, complimentary pressing, and room service breakfasts (butler service will be expanded to all staterooms in 2013).

Breakfast and lunch were buffet-style in the main Crystal Dining Room (with lighter early- and late-riser offerings in the upstairs lounge), while plated dinners, featuring continental classics and regional specialties, were served in a single seating. A small section of the ship’s lounge was carved out to serve as the fee-free alternative dining area, Portobello’s Italian Restaurant. Lunch and dinner were paired with complimentary regional wines and beers, and soft drink selections.

Apart from the dining areas, public spaces were limited to the main Panorama Lounge and Bar, with floor-to-ceiling windows, small library, and a much-frequented coffee and tea area. It was also the site for evening port talks and nightly musical entertainment, which on our sailing included local acts like a traditional Bavarian oom-pah band and a Hungarian gypsy music and folkloric dance troupe. A small teak deck set at the bow and large rooftop deck provided primo outside perches.

Onboard dress was relaxed and casual, with no formalwear required, though the welcome and farewell dinners, and the evening concert in Vienna, lent well to some extra polish.

Given Scenic Cruises’ Australian roots, I was expecting more Aussie company, but found that Canadians and Americans largely dominated the English-speaking clientele on our particular sailing, with a sprinkling of Australians, Brits, and New Zealanders thrown in the mix. The four-dozen international staff, meanwhile, came helmed by a hard-working Hungarian captain, Bulgarian cruise director, and a Serbian hotel manager.

The three-year-old Diamond will debut from a retrofit in spring 2013, along with the rest of the line’s fleet (excluding the Scenic Emerald), in order to join rank with the most up-to-date offerings from the line’s newest debut, Crystal. Expect "Sun Lounge" cabins featuring sliding-glass doors that essentially transform rooms into open-air balconies, extra dining venues, and a fleet of electric bicycles.

Scenic Cruises—a 2008 spinoff of all-inclusive escorted tour company Scenic Tours, touting some 25 years in the business—offers 7- to 21-night river cruises throughout Europe, along with sailings in Russia and Egypt.

All photos courtesy of John Garay