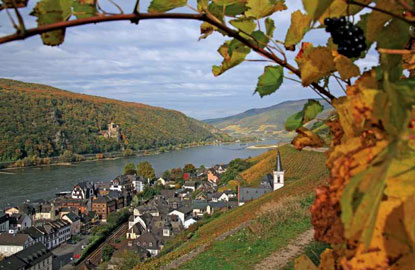 Fresh off the boat from my first European river cruise, I’m a convert. With a ship size that’s considerably smaller than ocean-plying vessels (accommodating just more than a hundred passengers), crowds were sparse, amenities were ample, and port calls along the romantic Rhine River were knock-your-socks-off amazing. Combine that legendary route—rimmed with dramatic medieval castles and charmingly timeworn settlements—with expert handling by Avalon Waterways, and a winning first impression was guaranteed.

Eight-year-old Avalon, targeted largely for a US market and entirely for an English-speaking one (it’s owned by the Swiss-based Globus travel brand, backed by more than 80 years in the tourism biz), caters to Americans’ taste for service in a European market where it’s often lacking—not to mention it maintains the youngest fleet of ships out on European rivers. By the end of next year, the booming river cruise line will have 19 vessels in its fleet, 13 of which will be European based, with others in China, Egypt, and the Galapagos—and, this fall, in Vietnam and Cambodia.

But it’s their new line of "Suite Ships," which I recently sampled, that’s worth writing home about. I just disembarked from the 128-passenger, all-suite Avalon Visionary, which debuted in May (along with the Vista), following on the heels of the successful Panorama launch last year (two more Suite Ships are will roll out in 2013, too).

On the Visionary, I indulged a long-held travel fantasy. You know those vacations: You’ve run yourself entirely ragged sightseeing and by day five or so, can barely fathom the thought of peeling yourself out of bed for another day of it. But there are so many more things to see! In my little fantasy world, lying in an early morning haze, I often imagined that my bed would lift off and fly away to take me to all of the attractions of the day. Well, Avalon Waterways had my number, with their innovative, impeccably designed Suite Ships delivering the closest version I’m likely to get my lounge-y dream.

It works like this: Onboard suites forego plain porthole windows or regular ol’ balconies in favor of 10- by 7-feet floor-to-ceiling sliding-glass doors that essentially convert cabins into open-air balconies, with beds set up to gaze out over the passing panoramas. Simply wake up, and be treated to sweeping views of the riverside landscapes, without moving a muscle. For worn-out sightseers, a victory is won. 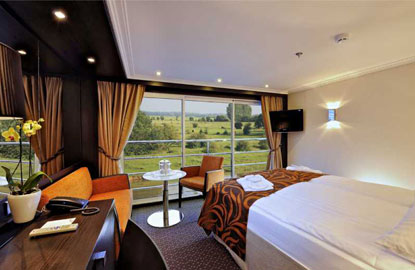 Windows aside, the spacious 200-square-feet suites (some 30 percent larger than the industry standard) come with extras like flat-screen satellite TVs with free on-demand movies (we enjoyed a roaring on-TV fireplace each evening) and complimentary WiFi access, along with premium beds (topped with memory foam and Egyptian linens), a desk/vanity and sitting area, and bathrooms stocked with L’Occitane products.

The four-deck, contemporary designed Visionary offers a lounge chair-littered sky deck with a Jacuzzi, duo of lounges, large dining room, hair salon, computer corner, and small fitness room. Not that we left ourselves much time to linger.

An Avalon adventure really delivers on jam-packed port calls, with nearly all excursions included the price of the cruise. It’s not the choice vacation experience for those looking to sleep in or lull on deck cradling a piña colada, but is a jackpot for those in search of enriching in-port experiences. Nary a day passed that we weren’t out pounding the pavement by 8 am—and often headed out for two excursions in a single day, after a lunch back onboard.

English-speaking local guides (of varying competencies) whisked us about the Rhineland’s history- and culture-rich ports, set along this "oldest highway in Europe" (flowing between the Swiss Alps and Holland’s North Sea).

Our weeklong "Romantic Rhine" itinerary kicked off in Amsterdam and floated along to the German cities of Cologne, with its twin-towered gothic cathedral; Koblenz, where the Moselle meets the Rhine; Rüdesheim, with its quirky Siegfried’s Mechanical Musical Instrument Museum; the Mainz, home to the Gutenberg Museum; and the university town of Heidelberg.

Some of the very best sightseeing was done from the deck of the ship, when our cruise director narrated a particularly lovely 40-mile section of the dramatic Rhine Gorge, pocked by fairytale castles, imposing fortresses, and medieval villages, as well as the legendary Lorelei Rock, where a siren is said to have once lured sailors to their doom (happily, we passed unscathed).

Next up was the Alsatian region of France in pretty Strasbourg, with its gothic cathedral and colorful canal-lined buildings in Petite France. Worthwhile optional excursions (at an additional cost) led deeper into Alsace for wine-tasting (for lip-smacking Rieslings and Gewürztraminers) and to Colmar, home to the exquisite Isenheim Altarpiece. The cruise wrapped up in Germany’s Black Forest, with a fun stop at a cuckoo clock store, before ultimately disembarking in Basel, a cultural crossroads at the borders of Switzerland, France, and Germany. 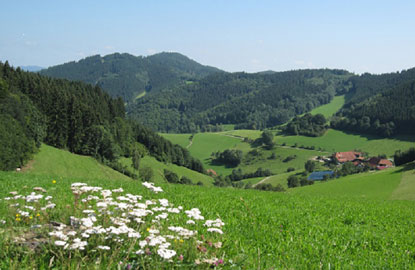 Back onboard after full days, those with some kick still in ’em could partake in light evening programming, including port talks for the day ahead and piano music in the main lounge. One evening, an exceptional local trio of string musicians was brought aboard to much acclaim. Dress code remained "casual and comfortable" throughout, and it was refreshing to be on a cruise vacation where you could leave the fancy dress back home. Only the captain’s welcome and farewell dinners were moderately more polished affairs.

Our excellent and ever-present cruise director, Hans Beckert, ran a tight ship, managing the feat of keeping 100-plus passengers comfortably in-the-know. A bit of a mother hen and clearly a seasoned pro, my beau and I took to calling him "Papa Hans," and still, two weeks after disembarking, are missing the ease of having him around to help herd us about.

Food was above-par with eclectic pan-European fare on the menu. Open seating dining was in the main dining room, while the sky deck was the site of a handful of alfresco BBQ lunches. Four-course à la carte dinners included regional wines, beer, and soft drinks. We found the pasta stations and tempting dessert tables at the lunch buffets to be best, as was the festive German-themed luncheon. Breakfast buffets included hot dishes and a cooked-to-order egg station.

Fellow passengers were a well-travelled bunch of Anglophones, averaging in their 60s. More than half were American, though a healthy sprinkling of Brits, Canadians, Australians, New Zealanders, and South Africans were also represented. Kids were entirely absent, and given the limited onboard distractions and heavy port days, it was all for the best.

Value ranks supreme with Avalon, with all onboard dining; wine, beer, and soft drinks; guided daily excursions; and WiFi bundled into fares (tips are additional). Rates on the Visionary start at $2,639 per person for 7-night "Romantic Rhine" sailings through November (availability limited). In 2013, the itinerary will be operated on the Artistry II starting from $2,449 (April to November)—save up to $1,000 per couple with special early-booking fares. Visit AvalonWaterways.com or call 877-797-8791 to book.