Finish off your trip to southern Africa with a visit to one of the world’s most impressive natural wonders. From great views to best access points, here’s what you need to know.

Formation of the Falls 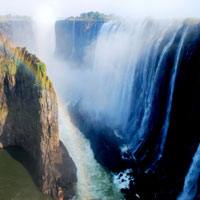 A basaltic plateau once stood where the falls are today. The whole area was once completely submerged, but fast forward to the Jurassic Age and the water eventually dried up. Only the Zambezi River remained flowing down into the gaping 1-mile-long continuous gorge that was formed by the uneven cracking of the drying plateau.

On a clear day the spray generated by the falls is visible from 31 mi (50 km) away—the swirling mist rising above the woodland savanna looks like smoke from a bush fire inspiring their local name, Mosi-Oa-Tunya, or the “Smoke that Thunders.” The rim of the Falls is broken into separate smaller falls with names like the Devil’s Cataract, Rainbow Falls, Horseshoe Falls, and Armchair Falls.

The Falls, which are more than 300 feet high, are one of the world’s seven natural wonders and were named a UNESCO World Heritage Site in 1989. Upon seeing Victoria Falls for the first time Dr. David Livingstone proclaimed, “Scenes so lovely must have been gazed upon by angels in their flight.” Truer words were never spoken.

The Falls are spectacular at any time, but if you want to see them full, visit during the high water season (April–June) when more than 2 million gallons hurtle over the edge every second. The resulting spray is so dense that, at times, the view can be obscured. Don’t worry though, the frequent gusts of wind will soon come to your aid and your view will be restored. If you’re lucky to be there during a full moon, you might be able to catch a moonbow (a nighttime version of a rainbow) in the spray.

To Zim or Zam?

Sorry Zambia, but the view from your side just doesn’t stack up to the view from the Zimbabwean side. Only on the Zim side do you see infamous Devil’s Cataract racing through the gorge; the entire width of the world’s most spectacular waterfall; and the most rainbows dancing over the rapids—a bronze statue of Dr Livingstone’s first sight of the falls is also here. You’ll also get to walk through the glorious rain forest that borders the cliff edges, where wild flowers glow from greenery and monkeys chatter in ancient trees. This is also where accessible, flat-stone pathways—found immediately after you pass through the Zimbabwe entrance to the Falls—will take even the most unfit, tottery, or wheelchair-bound visitor right up to all the viewpoints. You don’t need a map or a guide, as each path to the viewpoints is clearly marked.

Built in 1905, Victoria Falls Bridge is a monument to explorer, adventurer, empire-builder and former South African Prime Minister Cecil Rhodes’s dream of creating a Cape-to-Cairo railway. Though the line was never completed, steam-powered trains still chug over the bridge, re-creating a sight seen here for over a century. From the bridge you get a knockout view of the falls, as well as the Zambezi River raging through Batoka Gorge. An added bonus: watching adrenaline junkies hurl themselves off the 364-foot-high Victoria Falls Bridge.

River Club. With split-level rooms that cling to the edge of the great Zambezi, the River Club puts a modern spin on a Victorian house party. The view from the infinity pool seems unbeatable, until you watch the sun set from your claw-foot tub. Clever cooling mists of water draw flocks of birds to the massage tent, and the library begs for a glass of port and a serious book. History clings to the structure, built to the plans of the original house, but decorations have been lovingly collected from past and present. You could spend an entire day reading interesting anecdotes, old maps, Punch cartoons, and updates about the River Club’s support of the local village. A candlelight dinner is followed by croquet on the floodlighted lawn before you retire to your partially starlighted room.

Tongabezi and Sindabezi Island. If you’re looking for a truly African experience, Tongabezi and Sindabezi, its satellite island downriver, won’t disappoint. Never formal but flagrantly romantic, they are the frame around the picture, so to say, and do not upstage the reason you have come: the flora and fauna. Small Sindabezi Island, which has a 10-guest maximum, is separated by a stretch of river from Zambezi National Park. Each of the island’s huts has an open front with a private view, and your every need is anticipated, but there’s no electricity and hot bucket showers are by request only.

Victoria Falls Hotel. Hotels come and go, but this landmark built in 1904 has retained its former glory as a distant, stylish outpost in empire days, while pandering to today’s modern tastes, needs, and wants. Such grandeur can be a little overwhelming, and especially surprising if you’ve just been on safari. The hotel’s manicured lawns are perched on the falls’ edge, with a view of the bridge, and soothing sounds permeate the gardens (and the rooms if you leave the windows open).

Ilala Lodge. Near the center of town, this small gem is 10 minutes from the falls on foot. Thatch roofs give the lodge an elegant yet African look. Dining outside under the night sky at the Palm Restaurant, with the falls thundering 300 feet away, is a particularly enticing way to while away a Zimbabwean evening. The Palm also serves a great terrace lunch overlooking the bush. Guest rooms are hung with African paintings and tapestries and filled with delicately caned chairs and tables and with dressers made from old railroad sleepers. Unlike most hotels in town, Ilala Lodge has no fence around it, so at night it’s not uncommon to find elephants browsing outside your window or buffalo grazing on the lawn.