Coronavirus Leila Najafi Want to Stay in Costa Rica for Over a Year? A New Law Might Help You
Home  >  News   >   Rome’s Birthday is April 21st: A Celebration in Italian Phrases

Rome’s Birthday is April 21st: A Celebration in Italian Phrases 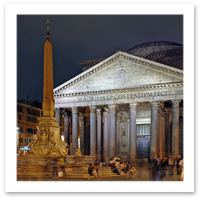 The eternal city is celebrating its birthday—number 2762—on April 21. If you’re lucky enough to be in Rome this week, you can enjoy reenactments of scenes from Roman history, concerts, fireworks, and the splendid sight of the ancient forums illuminated at night—all open to the public and free of charge.

You can still join the celebration even if you’re not in Rome this week. Throughout the year you’ll find traces of Roma’s long life everywhere in the city, including on the tops of manhole covers, which are emblazoned with S.P.Q.R., the ancient Latin abbreviation for the Senatus Populusque Romani, “the senate and people of Rome.” Contemporary Italians irreverently joke that the initials really stand for “Sono pazzi questi romani.” (“They’re crazy, these Romans.”)

If so, they’re crazy in the best possible way. I once approached the amiable concierge Luciano at the Hassler Hotel with a request.

“Sarebbe possibile…” (Would it be possible…) I began, but he cut me off with a wave of his hand.

“Signora, this is Roma,” he said. “Anything is possible.”

Whether this is your first visit to Roma or your fifteenth, you’ll gain a deeper appreciation of the city, its citizens, and the endless possibilities it offers just by learning just a little of la bella lingua italiana.

A Celebration of Rome in Italian Phrases

Roma’s long history began with a tale of love—or, more accurately, lust —almost three millennia ago. The pagan god Mars, smitten by the beauty of a Vestal Virgin, snuck into her temple in the town of Alba Longa to sleep with her. When the disgraced Vestal gave birth to twin boys, remarkable for their size and beauty, the evil tribal king ordered the infants thrown in the Tiber.

The cradle containing the babies drifted downstream and washed ashore at the base of the Palatine hill, named for Pale, a goddess of shepherds. There, according to legend, a lupa (she-wolf) suckled the twins Romulus and Remus. Romans contend that “in bocca al lupo,” the Italian expression for “Good luck!”, stems from the twins’ good fortune in finding her.

However, their nursemaid may well have been human. Lupa was slang for prostitute, and brothels were known as lupanaria. During ongoing excavations on the Palatine hill, archaeologists recently discovered what could be the original lupercale, the cave that sheltered the twin boys and that later served as a shrine for their worship.

In 753 B.C., after the twins had grown to maturity, they decided to build a town on the banks of the Tiber. When a violent argument erupted between them, Romulus killed his brother. Taking command, he gave his name to the settlement that would grow into a great empire. The street Latin of ancient Roma gave rise to the “Romance” languages, now spoken by more than 700 million people around the world.

To get a sense of Roma’s early days, visit the Palatine Hill, one of the seven Roman hills, late in the day when the crowds are usually at a manageable size. Walk among the ruins of the grand imperial residences that came to be known as palazzi signorili—the root of the word for a “palatial” building in French (palais), Spanish (palla) and English (palace). You’ll also get a great view of modern palazzine (little palaces), Italian for apartment buildings.

You can learn both history and vocabulary just by walking around Roma. Via Condotti, lined with elegant designer shops, was named for the aqueduct, or conduit, built in 19 B.C. to carry “acqua vergine” (virgin water) from a spring in the Alban hills south of the city. According to legend, a local young girl led Roman soldiers to the site—a discovery that the parched city celebrated for 59 days. For centuries people bought or leased horse-drawn carriages on one of its cross-streets, Via delle Carrozze (carriages). Nearby Via della Bocca di Leone (Street of the Lion’s Mouth) was named either for a statue of an open-mouthed lion or for an opening that looked like a lion’s mouth leading into a sewer line.

When I (inevitably) get lost in Roma, I look —and listen —for the nearest fountain. Italians describe Roma as “la città delle fontane,” with hundreds of water-spouting sculptures. In front of La Scalinata (the Roman term for what tourists call the Spanish steps), Pietro Bernini built the fountain “La Barcaccia” (old boat), designed to recall the floods of 1621, when the Tiber overflowed and left the wreck of a battered boat in its wake.

His son Gian Lorenzo Bernini’s magnificent Fontana dei Fiumi (Fountain of the Rivers) decorates Piazza Navona, which may be Roma’s most beloved public square. Don’t miss the charming Fontana delle Tartarughe (Tortoise Fountain), located in Piazza Mattei. Bernini (the younger) added the turtles a hundred years after the fountain was first constructed. (I like to visit a fine replica in San Francisco’s Huntington Square, a little park nestled on top of Nob Hill.)

To meet a Romano de Roma (dialect for a true native), go to the Piazza di Pasquino near Piazza Navona. There stands an ancient statue dug up by street workers around the turn of the sixteenth century. In celebration of the feast of San Marco on April 25, 1501, a cardinal draped a toga around the armless torso and attached Latin epigrams to its base. Jocular Romans followed suit, covering this unofficial community bulletin board with anonymous satiric jibes that lampooned church and state. The “talking statue” hasn’t been quiet since.

I always check out the latest puns and postings, although I can’t always decipher the city’s lively dialect, Romanesco. Wherever you go in Rome, you’re bound to hear some of its colorful expressions. A cab driver might describe a local politician as “the best cat in the Coliseum” (which is overrun by feral felines), the figure who comes off best in a difficult situation.

“Mo’ te gonfio!” parents on the street will say to a naughty child. It translates literally into “Now I’m going to make you all swollen,” meaning “I’m going to slap you so much you’ll be swollen in no time!” Although it sounds violent, the phrase is a humorous way of telling children to behave—or else.

“To remain like Father Falcuccio,” another Romanesco idiom, refers to a hypothetical priest who, having lost his clothes, had to cover his naked private parts with “one hand in front and another one behind.” A Roman ends up in this hapless predicament when, for instance, he wrecks his car before he’s paid off his auto loan.

Quando sei a Roma (When in Rome)

Enjoy “la città eterna con le sue virtù e i suoi vizi” (the eternal city with its virtues and its vices.) You might suggest fare alla romana or “going Dutch.” Or ask a Romanista, a fan of the Rome football (soccer) club, how the leoni giallorossi got their name. (It’s from the giallo oro, golden yellow, and rosso porpora, crimson red, of ancient Roma). And listen for these modi di dire romani (Roman sayings):

Roma caput mundi
Rome, center of the world, a Latin expression used by writers since the days of Cicero

Fammo alla romana
Let’s do as the Romans do.

Dianne Hales spent considerable time in Rome studying Italian and doing research for her new book, La Bella Lingua: My Love Affair with Italian, the World’s Most Enchanting Language, which will be published by Broadway Books on May 12. You can find out more at becomingitalian.com.