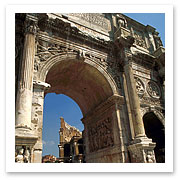 Colosseo. The shouts of gladiators, the cries of the crowd, and wails of pitiless persecutions (though Christians were probably martyred elsewhere) echo across these ancient stones (pictured right).

Ostia Antica. Perhaps even more than Pompeii, the excavated port city of ancient Rome conveys a picture of everyday life in a busy commercial center.

The Pantheon. Take time to absorb the harmonious proportions of this pagan temple that was later consecrated as a church, and stand under the oculus to see the eye of heaven. 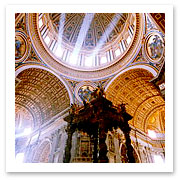 Basilica di San Pietro. The largest church in the world, built over the tomb of St. Peter, is also the most imposing and breathtaking architectural achievement of the Renaissance (pictured right).

San Clemente. Delve deep into the excavations below this church to get a sense of how Rome, and its religions, grew.

San Ignazio. Gold and jewels create an overwhelming statement of splendor here—Roman Baroque in its apotheosis.

San Luigi dei Francesci. Adorning the Chapel of Saint Matthew are the three greatest Caravaggio paintings in the world.

Santa Maria in Trastevere. Gilded mosaics from the 12th and 13th centuries give a unique glow to what is purportedly Rome’s oldest church dedicated to the Virgin Mary. 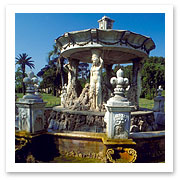 Musei Vaticani. The sheer size of the Vatican Museums is daunting, but with the Sistine Chapel, the Raphael Rooms, and scores of masterpieces on view, this is one of the world’s great art repositories.

Palazzo Altemps. The restored interior hints at the splendid Roman lifestyle of the 16th through 18th centuries and serves as a stunning showcase for the most illustrious pieces from the Museo Nazionale Romano’s collection of ancient Roman sculpture.

Palazzo Doria Pamphilj. Get a taste of the lifestyles of the rich and famous—the 17th-century version—at this fabulous palace, still lived in by the Pamphilj heirs. Stare down the famous Velazquez portrait of Pope Innocent X, one of the finest portraits ever painted (pictured above, right).

Via Giulia. A “virtual painting” of the Renaissance, this magnificent street was created at the behest of Pope Julius II (he also had Michelangelo whip up the Sistine Ceiling). Home to some of Rome’s grandest palaces, it remains “the salon of Rome.” 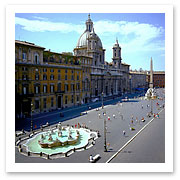 Gianicolo. The climb to the top of this hill rewards you with a marvelous vista of the entire city and the Castelli Romani. Add a sunset and you have a perfect Roman moment.

Via Gregoriana. Climbing up to the top of the Spanish Steps, this elegant street has always been an address of note—Hans Christian Andersen and Ingres were among the greats who have lived here. And it’s still crowned with the Palazzetto Zuccari, the city’s most bizarre residence.

Piazza Navona. The exuberant spirit of the Baroque age is embodied in Bernini’s fantastic Fontana dei Quattro Fiumi (Fountain of the Four Rivers), set off by the curves and steeples of Borromini’s church of Sant’Agnese, and admired by colorful crowds devouring gelati (pictured right).