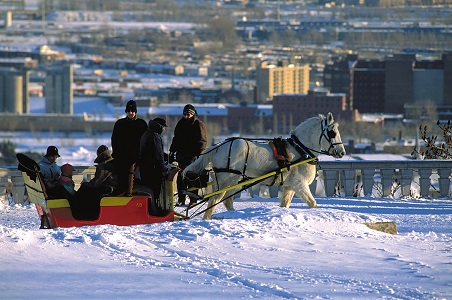 Winter in Montréal can be brutal—and beautiful. Couples willing to bundle up are rewarded with one of the most romantic cities in North America, barely an hour-and-change’s flight from New York, Philadelphia, D.C., and Boston. French floats through the snow-blanketed cobblestone streets (it’s 63 percent of the population’s first language). Locals greet one another with smooches on both cheeks (tip: always go right cheek first). And croissants, ice cider, foie gras, and chocolates are never far away. What else would you expect from an island shaped like a kiss? 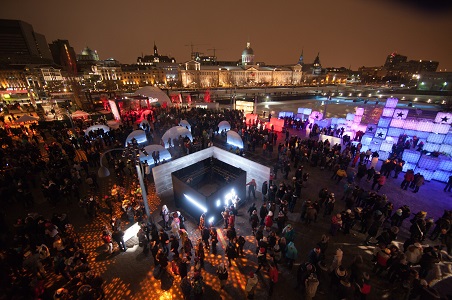 Arrive by mid-morning and drop your bags at your hotel in Vieux-Montréal, the old part of town along the St. Lawrence River. Spend the afternoon art-ogling at galleries like Galerie Le Royer, dressing up like Russian royals at Les Fourrures Pôle Nord, or ice fishing in the shadow of the looming Clock Tower. Pop-up cabanes (cabins) along the fishing holes are rentable for when it gets too cold, or when you need to practice your, um, two-cheek kisses.

Once it’s time to fuel up, though French may be the city’s most identifiable culinary influence, the new-school Italian restaurants here are amazing. Try Nora Gray, where Chef Emma Cardarelli melds Sicilian traditions with Québec-sourced ingredients (crispy veal brains with lemon mostarda, porchetta with apples and cauliflower) and the scene-y amber bar makes a mean Negroni. Or, hit up Little Italy, where newcomer Impasto impresses with Puglia-style spiral sausages and cloud-like butternut gnocchi. (Insider tip: Reserve a seat at chef’s counter for a view of the action in the open kitchen.)

After dinner, head back to Vieux-Port to dance till midnight under the stars—and maybe, the snow—with famous electronica DJs at Montréal’s eighth annual Igloofest; shows go on every weekend January 16 to February 8. 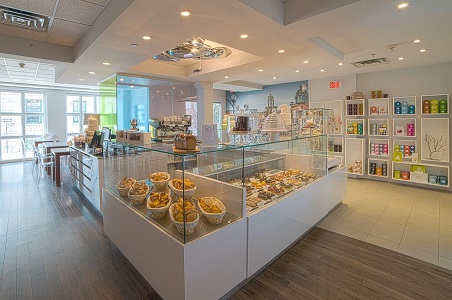 Skip the continental breakfast at the hotel and proceed directly to the new Maison Christian Faure, a pastry school, baking atelier, and stylish café stacked like a triple layer cake in a neat and narrow gray stone address in Old Montréal. It’s terrifically close to all the area hotels and opens early—8am, about the time you’ll find the French-born Faure (one-time pastry prince for Monaco‘s royal family) delivering silver pans of sugar-dusted brioche balls, burnished elephant ears, and almond croissants with fillings like pudding from the downstairs kitchen. Order the elegant Petit Déjeuner Royal (coffee or tea, choice of pastry, fresh-squeezed orange juice, madeleines, and house-made jam) at the glass viennoiserie counter, where ziggurats of canelé rise from cake dishes, and grab a Lucite chair by the generous front windows.

Montréal has spas of all stripes: medicals spas, holistic spas, Scandinavian spas, even floating spas. Head to the peaceful and efficient Victoria Park in Westmount for a couples’ rubdown, followed by a healthful lunch at sushi master Antonio Park’s adjacent restaurant, Park. Then stroll around Westmount, a stately Anglo stronghold that was only incorporated into Montréal proper in 2001.

Ascend Mount Royal—the mountain gives the city its name—to the Lac-aux-Castors (Beaver Lake), where bundled-up locals skating, tobogganing, sledding, and cross-country skiing create the effect of a snow-globe village. Grab two cups of hot cocoa at the café of the chalet-like Le Pavillon and hail one of the horse-drawn sleighs for a romantic ride through the park.

Middle Easterners comprise one of Montréal’s biggest ethnic groups, and the city is home to some of the best Persian restaurants in North America. Among them is Damas, a cozy, jewel-like space with dishes highlighting whipped hummus, warm octopus, and anything with lamb.

For an early brunch in the Plateau neighborhood, make way for Maison Publique, voted as one of the one of the 10 best new restaurant in the county by Air Canada’s in-flight magazine. Arrive when it opens at 10am, before hip locals wearing knitted scarfs and scruffy beards jam the lodge-like tavern. English celebrity chef Jamie Oliver owns the place, but the Britain-meets-Québec menu falls under the jurisdiction of partner and chef Derek Dammann, a local guy who first earned acclaim at sorely missed restaurant DNA.

Montréal is well connected and walkable, and with a stomach full of Bloody Caesars and Dammann’s buttered thick-cut toast and ground cherry preserves, the half-hour stroll to Jean-Talon, the biggest of Montréal’s four public food markets, will ready your appetite for the onslaught of local goodies. Wine lovers cannot miss ice cider this time of year; just as with grapes, the cold weather concentrates the sugars in the local apples, creating the base for velvety elixir you can sample and buy at Le Marché de Saveurs du Québec, a boutique specializing in Québec-produced artisan foods. We recommend Domaine Pinnacle’s ice ciders; they come in handsome tubes that travel especially well in checked luggage. 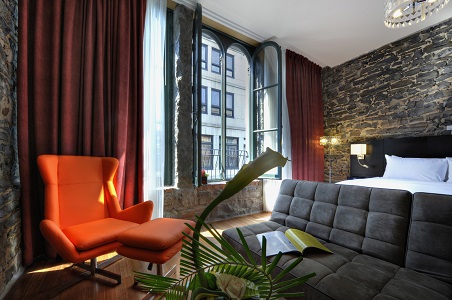 Conveniently located in Vieux-Port, Le Petit Hotel (from $435/night) is part of a family of stylish boutique properties sprinkled around the district’s cobblestone streets. Historic bones (exposed stone walls, wood floors, iron-clasp windows that open onto Juliet balconies) frame the 28 modernized rooms, and the sleek lobby doubles as a café and bar.

With 133 rooms spread across three Victorian-era buildings on Rue Saint-Jacques, the Place d’Armes Hotel (from $169/night) is a larger property with a boutique vibe, 3000-square-foot spa and hammam, and views of the Notre Dame cathedral. Splurge for the suites, which have spectacular bathrooms with soaking tubs.

Adam Erace writes about food, drink, and travel for Fodor’s and magazines like Details, Southern Living, and Men’s Journal. He loves exploring far-flung destinations and their regional specialties almost as much as his hometown, Philadelphia, where he lives with his wife and two zany dogs.