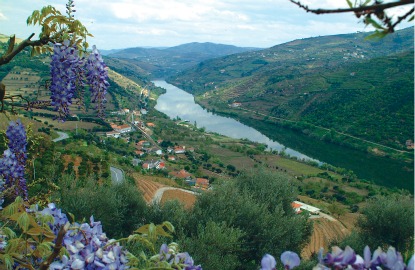 River cruising in Portugal's Douro River Valley—a delightful region comprised of old-world villages and vineyard-coated countryside—is booming, with next year's cruise calendar ramping up its offerings, courtesy of three major river cruse lines. AmaWaterways is debuting a duo of fresh itineraries and a new vessel; Viking River Cruises is making their first-ever foray into Portugal; and Portugal river cruise pioneer Uniworld is ensuring its firm foothold in the region with a shiny new ship.

AmaWaterways is launching two new 2013 itineraries in Portugal, set to be operated on a new-build ship, the 108-passenger AmaVida (slated for a March 2013 debut). The riverboat will feature balconies in most staterooms and offer alfresco dining, a sundeck and swimming pool, comped Internet access, and, of course, fittingly for this region, plenty of free-flowing local wines (free with dinner). Though the cruise line operated in the region from 2008 to 2010 under a charter arrangement, this will be the first time that they are present on the Douro with their very own ship.

The 10-night "Enticing Douro" itinerary will combine a three-night stay in Lisbon with a cruise through the Douro River Valley, including port calls in Porto, Régua, Barc d’Alva, Vega Terrón, Pinhão, and Bitetos. Sailings embark on select 2013 dates from March to November; rates from $2,199/person; www.amawaterways.com.

Or, hop aboard the 13-night "Port Wine & Flamenco" sailings, which embark from Madrid in Spain and cross the border into Portugal's Douro River Valley, with stops in Pinhão, Bitetos, Porto, and more, before disembarking in Lisbon (reverse itineraries are also available). Sailings embark on select 2013 dates from April to October; rates from $2,799/person; www.amawaterways.com.

Viking will be launching their first-ever Douro River cruises in 2013, via their 9-night "River of Gold" itinerary aboard the 2011-debuted Viking Douro, taking in port calls in Portugal and Spain. The itinerary begins with a land tour in Lisbon, and continues on with the cruise embarkation from Porto, with Portuguese port calls in Bitetos, Régua, Pinhão, Barca d’Alva, along with Spain's Salamanca and Vega de Terrón. The Viking Douro features spacious staterooms with French balconies along with a sundeck, complete with pool and Jacuzzi. Book now for a 2013 early-booking discount that includes two-for-one pricing, plus $1,100 off airfare. Sailings embark on select 2013 dates from March to December; rates from $2,956/person: www.vikingrivercruises.com.

Since 2001, Uniworld has been a pioneer in the Portuguese cruise river market (as catered to English-speaking tourists), and their ever-popular 10-night "Portugal, Spain, and the Douro River" itinerary will soon operate on the new, 118-passenger Queen Isabel as of spring 2013, replacing the 2011-inagurated Douro Spirit (hardly outdated, the Douro Spirit will be chartered by a yet-to-be-named river cruise company for sailings on the Douro, as well). The Queen Isabel will ooze old-world style elegance and be outfitted with 20 suites. Sailings embark on select 2013 dates from March to November; rates from $3,299;
uniworld.com.

Thinking of a trip to Portugal?

For up-to-the-minute hotel and restaurant recommendations, plus the best planning advice, check out our online Portugal Travel Guide.