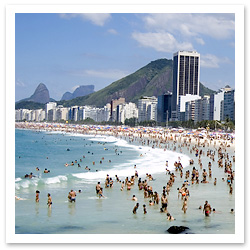 Brazilians call Rio de Janeiro the cidade maravilhosa (wonderful city). Cariocas—the locals—live in one of the most densely populated places on earth, poised between the rain forest and the sea, a city filled with color, music, and huge enthusiasm for life. Rio is, of course, a huge city, so expect street crime, crazy drivers, and other inevitable unpleasantries. But don’t let these deter you from visiting. Common sense and the advice below will make your visit to cidade maravilhosa even more wonderful.

Winter Weather: Brazil’s winter months are June through August; temperatures average around 68 F in the day and dip to around 60 F at night. Summer runs from December through March with temperatures ranging from 77 F to 108. If you come between November and April, you may experience the occasional brief but strong rainstorm.

In Your Suitcase: By day, life in Rio revolves around the beach. At night, stylish dress is expected, even in clubs and restaurants. Pack a light sweater or jacket for winter nights and overly air-conditioned restaurants. Do invest in a pair of Havaianas (“ah-vai-YAH-nas”—Portuguese for “Hawaiians”) in Rio. These Brazilian-made flip-flops are very comfortable and run about $12 a pair. 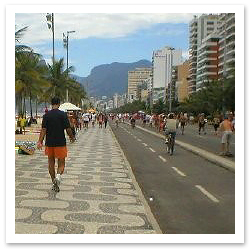 Get Over Yourself: Don’t fret about your figure or lack of it. Everyone lives on the beach in Rio, and everyone—the firm and the flabby, the young and the old—is often scantily clad. So frolic freely in your swimsuit but do cover up on your way to or from the beach. Shorts or a pareo wrapped around the waist for ladies, surfer shorts on top of your Speedo briefs (not the smallest possible Speedos in the known world, please, unless you really want to look like a tourist) for the guys, and a T-shirt on top for boys and girls.

Beach Banquet: Whatever you need for a perfect sun and surf day can be purchased right on the beach. Vendors stroll along the sand offering ice cream, cookies, corn on the cob, shrimp on a stick, sandwiches, fresh-sliced fruit, bottled water, iced tea, cold beer, and caipirinhas (a potent brew of sugarcane liquor, limes, and sugar). You can rent beach chairs and umbrellas and purchase hats, towels, sunglasses, and swimsuits.

Beach Bandits: Hiding your money in your shoes, burying it in the sand under a towel, or other cash-stash schemes will not thwart thieves, who know all these tricks and will snatch the goods while you’re splashing around in the surf. Keep your hotel room key pinned inside your bathing suit, and stash the cash in a small plastic bag to keep it from getting wet.

Money Matters: The Brazilian monetary unit is the real (“rey-al”). The official exchange rate is published daily in the newspaper. Cash can be exchanged at most banks and major hotels. All major credit cards are accepted in Brazil, but Visa is the most popular, followed by American Express and MasterCard. For ATM withdrawals, the machines at The Banco do Brasil tend to accept North American cards without any hiccups (other ATMs often are recalcitrant). 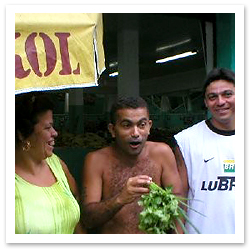 Você Fala Português? Many hotel workers and store managers in Rio speak a little English, but the operative word here is “little.” Before you go, try to learn a bit of basic Portuguese.

Don’t Expect Punctuality: You shouldn’t take it personally if locals are late for a rendez-vous. For most denizens of Rio, a half-hour late means right on time.

Food, Glorious Food: For breakfast or lunch try one of Rio’s juice bars, which are everywhere in the city. The fresh-squeezed juices are made from exotic tropical fruits you’ve probably never heard of. For breakfast try an açai (“assah-eeh”), made with the pulp of the Amazonian fruit of the same name, with a shot of guaraná—a tropical berry that contains caffeine. For dinner (expect to pay $35-$40 a person in better places), try Brazil’s national dish, feijoada (“fay-show-ah-dah”), a stew of black beans and pork typically served with side dishes of sliced oranges, farofa (stir-fried manioc flour), couve mineira (thinly sliced kale), and white rice. It’s particularly good at Casa da Feijoada (Rua Prudente de Morais, 10 B; 2523-4994). 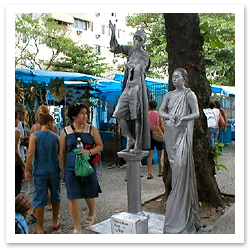 Shop Till You Drop: Don’t miss Rio’s best shopping at the Sunday Feira Hippie—the “hippy market.” Craftspeople from all over Brazil sell all sorts of things, including hammocks, embroidered clothing, silver jewelry, paintings, T-shirts, carvings, and much more. The Feira Hippie is held from 9 a.m. to 6 p.m. every Sunday on Praça General Osório in Ipanema.

Stay Safe: Like everywhere, there is crime in Rio. Leave the pricey jewelry at home. Your camera should not be dangling loosely from your shoulder. Take only the money you need out with you, stash the rest in the hotel safe or only withdraw as much as you need each day from the bank. Pay special attention if you notice young kids walking closely behind you, or two guys cruising around on a moped. Avoid the downtown area, especially Saara, after dark—it’s deserted. Walking on the beach at night is probably not a good idea, and although many tourists like to wander off the beaten path when they’re traveling this isn’t always a good idea in Rio—stick to the well-populated areas. If you need to report a robbery or other problem, go directly to the tourist police, in Leblon, on Ave Afrânio de Mello Franco, across from the Scala nightclub. Or call 3399-7565 or 3399-7457. 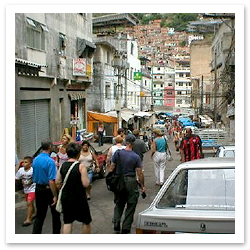 Walk on the Wild Side: Do not attempt to enter a favela, a Brazilian slum neighborhood, unless you are on a tour. It may seem odd to take a guided excursion through an impoverished area ruled by criminal factions such as the ADA (Amigos dos Amigos), the CV (Comando Vermelho) or the TC (Terceiro Comando), but the money you pay for a tour will be used in part to provide day care, health care, and development within the favela. Rocinha is the largest Favela in Rio, and worth a visit. Don’t assume that everyone you meet during your favela tour is a drug lord. Most residents are honest, hardworking people.

Be Street Savvy: Drivers in Rio are incredibly exuberant, which is why the crosswalks are located well away from street corners (drivers tend to happily whiz around the corners at top speed). Also bear in mind that in Rio de Janeiro motorists are allowed to treat stoplights as stop signs—drivers will pause but keep going if no other cars are spotted—between the hours of 10 p.m. and 6 a.m.