News Apeksha Bhateja These 5 Countries Are the Most Vulnerable to Climate Change
NewsRevisiting a Gulf Coast Icon: Grand Hotel Marriott 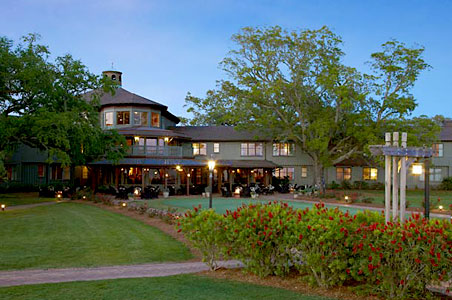 Every TV in the airport blared reports of Hurricane Sandy’s impending destruction, and I was on my way to a place that knows a thing or two about hurricanes. One of the bumpier landings of my airplane-riding days ("you can thank Sandy for that," a flight attendant announced when we were safely on the ground) into Pensacola International Airport was the only clue that in the air that something was amiss.

Later that night, Hurricane Sandy made landfall more than 1,000 miles to the northeast of Point Clear, Alabama, which was one of the areas hit badly back in August 2005 by Hurricane Katrina. It’s also home to the Grand Hotel Marriott Resort, Golf Club & Spa, which has become a case study in how to rebuild after disaster. So it was particularly timely, though not at all planned that way, that I finally revisited the rebuilt iconic Gulf Coast hotel as it (and we) braced for yet another hurricane.

But its Bucky Miller who has seen it all. His statue, erected in May 2005 in honor of the longtime Grand Hotel hospitality ambassador who put in 61 years at the property, had a front-row seat to Hurricane Katrina’s wrath in August 2005. Miraculously, Bucky escaped without a scratch, his hand still outstretched and serving tray safe at his side.

While the hotel didn’t make it out unscathed, it did retain the hospitality that Miller championed, coming back stronger than ever.

The Grand Hotel Marriott Resort, Golf Club & Spa in Point Clear, Alabama, opened in 1847 as a getaway for antebellum Southern society. Throughout its history, it’s been the kind of place families went back to year after year, where couples tied the knot, and where guests stayed busy—or did nothing at all—among the resort’s live oaks.

When Hurricane Katrina came through, it was nothing the resort hadn’t seen before, having been damaged in the past by everything from fire to floods to war. Still, when the chairs from the restaurant ended up three miles down the road and the first-floor interior was completely wrecked, some wondered if the 550-acre "Queen of Southern Resorts" would ever return to her former opulence.

The answer, thankfully, was yes. There are just small reminders of the surging flood, like artwork for sale in the lobby that makes use of washed-away wood. Plenty more came out of it that might not be visible on first glance. "Katrina was probably the worst and best thing to happen to the hotel," says PR director Bill Lang, who notes that it gave The Grand a chance to make improvements that might not have otherwise been made. The property reopened in 2006, and we (finally) made our way down to see it for ourselves.

Fire pits and hammocks now dot the property, nestled along the manicured lawns that overlook the water. Approximately 19,400 pieces of bath linens were replaced. More than 40 new trees were planted, and a Chef’s Herb Garden produces fresh goodies that make it into the meals every day. The seafood-focused Saltwater Grill offers a less formal alternative to the Grand Dining Room but still with high-quality meals. The pier and the ballroom were both completely redone, because, as Lang says, "when the pier ends up in the ballroom, you get a new one of each." Underwater lights at the pier give anglers some illumination to fish by (poles and bait are provided by the resort). All in all, $50 million in renovations were completed post-Katrina, to match a $50 million renovation finished just a couple of years before the disaster, in 2003.

While those well-heeled guests of yore would likely still recognize this crown jewel on Mobile Bay, there’s more to do today than in years past. The cannon is fired every day at 4 pm following a brief historical presentation, which leads into afternoon tea and cookies. Horseshoes, croquet, a putting green, and tennis court use are all covered by the resort fee, as is non-motorized beach equipment like kayaks and sailboats. Those who want to take it a little easier can catch one of two daily shuttles to nearby Fairhope for shopping and strolling, or make something splendid on the Craft Patio.

The Quiet Room in the 20,000-square-foot Spa at the Grand is not to be missed, with its oversized wood loungers, free drinks (a poinsettia, aka cranberry juice with champagne, is the most festive choice), and a candle-surrounded whirlpool with a backdrop of amazing tile mosaics. Golfers will feel similarly about the two courses on the Robert Trent Jones Golf Trail, which offer 36 holes of picturesque playing.

So come, sit by Bucky’s statue, sip on a mint julep (Bucky loved to hand them out), and marvel at this beautiful property that’s stood the test of time—and natural disasters—and only to grow more grand.