Discovering the charm of Asheville.

When you ask most people what North Carolina means to them, they conjure images of shimmering heat and humidity, rural simplicity, or maybe the soaring dunes of the Outer Banks.  Savvy travelers, however, know about a very different side of the state that harbors rustic-luxe retreats and bohemian communities tucked among the peaks and coves of the Blue Ridge Mountains just a few hours west of the capital city of Raleigh.

Of course, the charms of western North Carolina have been an open secret for more than a century, ever since George Washington Vanderbilt erected the Biltmore House (still the largest private home in the United States) amid rolling parklands and formal gardens designed by Frederick Law Olmsted just outside Asheville, the cultural and economic hub of the region.

On the other side of the city, perched on the western slope of Sunset Mountain, the historic Grove Park Inn (now the Omni Grove Park Inn) has been providing a gracious retreat for visitors seeking a fresh-air respite since 1913. Founder Edwin Grove had purchased hundreds of acres in Asheville following the influx of business and money from the Biltmore’s construction, and opened his grand hotel, built from granite boulders (some weighing up to 10,000 pounds) pulled from the surrounding land, following a marathon of construction—he vowed to build the massive structure in less than a year and delivered in 11 months 27 days.

In the more than 100 years since opening, the Grove Park Inn has sheltered scores of distinguished guests, including artists, athletes, actors, and several U.S. Presidents. F. Scott Fitzgerald resided at the hotel for two years while his wife, Zelda, lived in a psychiatric hospital in Asheville (where she perished in a fire seven years after her husband’s death).  During World War II, the hotel was used as an internment center for Axis diplomats, and after the war served as a rest and rehabilitation center for returning servicemen from the U.S. Navy. 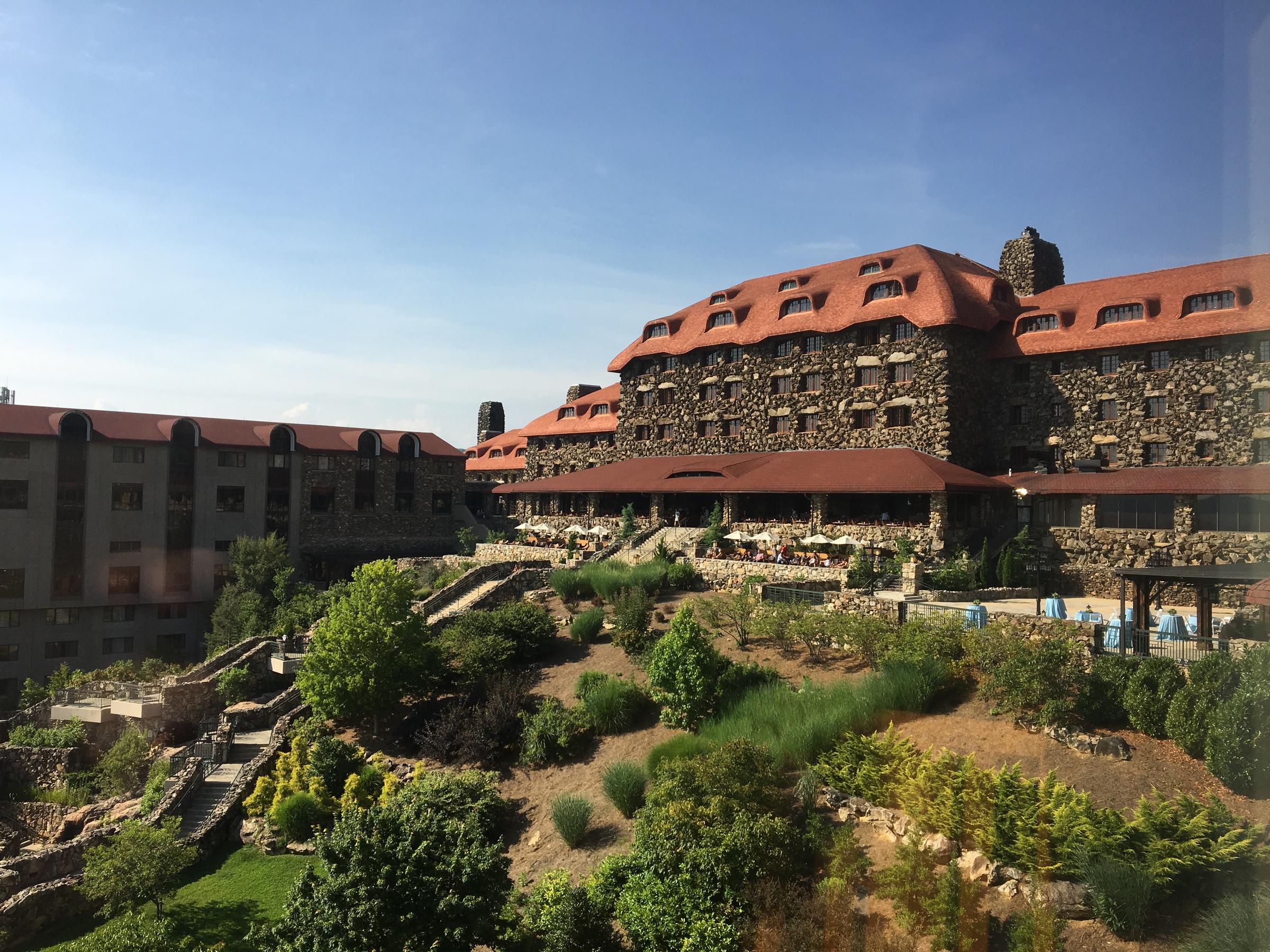 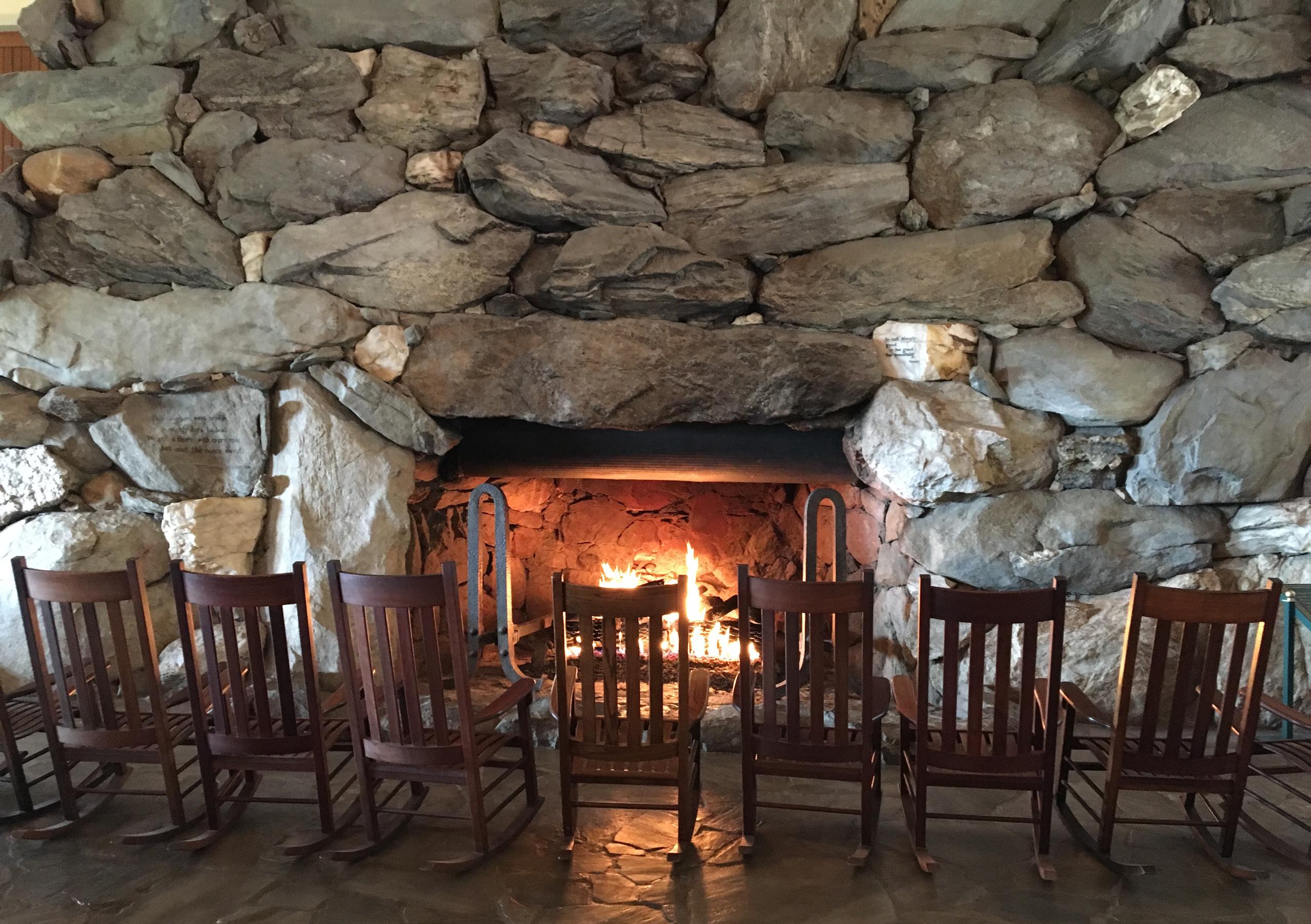 In the postwar era, the hotel expanded to the sprawling resort it is today, adding two wings in 1958 and 1962, bringing the number of guest rooms to more than 500. While preserving its historic Arts and Crafts–style character (and earning a spot on the National Register of Historic Places), the inn has evolved to accommodate the increasingly discerning tastes of its global clientele while celebrating the bounty and culture of the North Carolina mountains.

Foremost among the Grove Park Inn’s draws, both for overnight guests and day visitors, are its spa and numerous dining options. In fact, “spa” doesn’t seem quite adequate a term for the labyrinthine subterranean complex comprising 43,000 square feet of serene treatment rooms, indoor and outdoor pools, waterfalls, a café, shop, and small gym (the hotel also features a much larger sports complex in a different building on the property). The service offerings are appropriately diverse, with facials, body treatments, and massages tailored to just about every preference or need. Many of the treatments incorporate local ingredients such as sourwood honey (a prized—and pricey—regional treat) and herbs and flowers from the hotel’s expansive gardens. 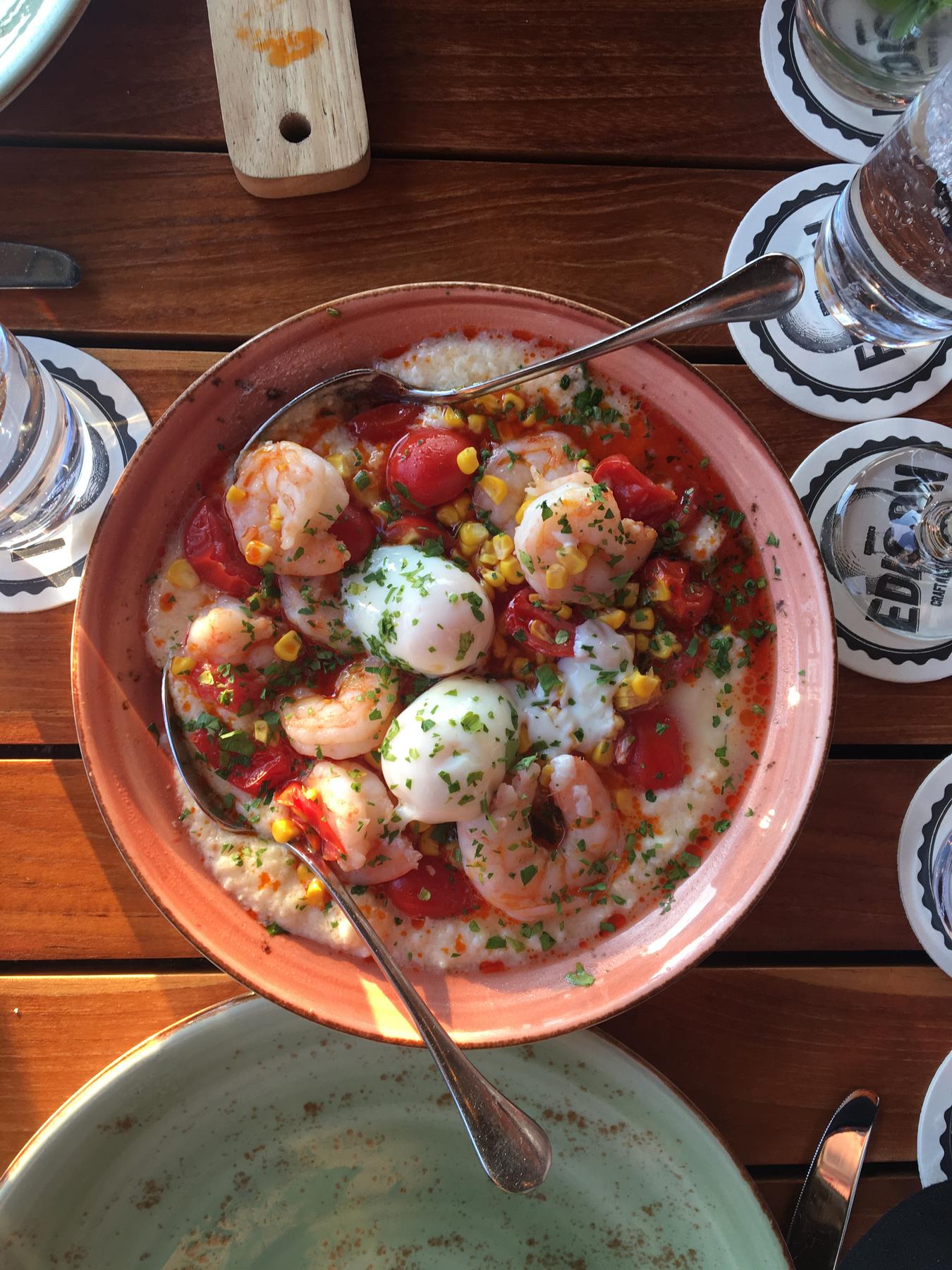 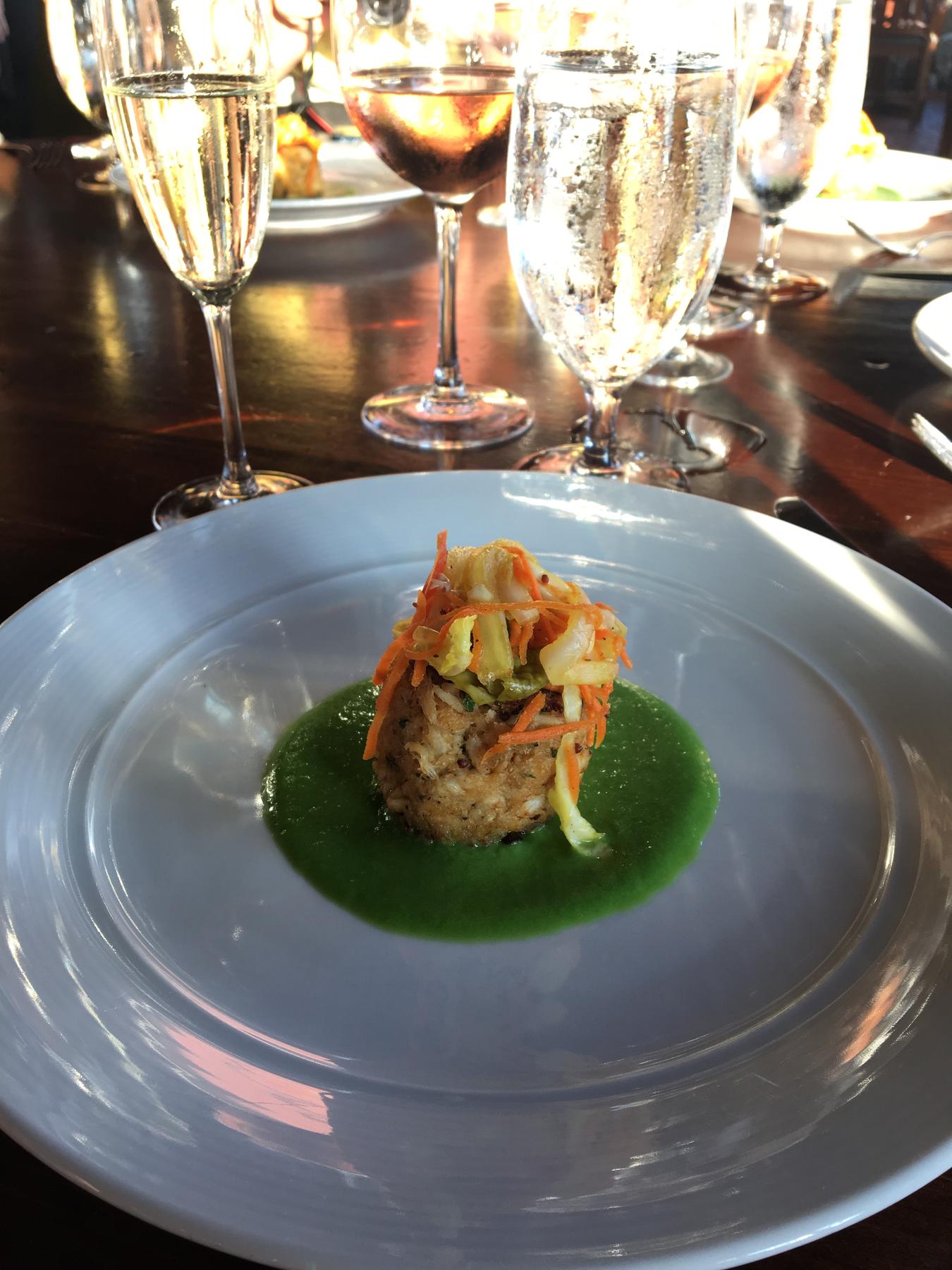 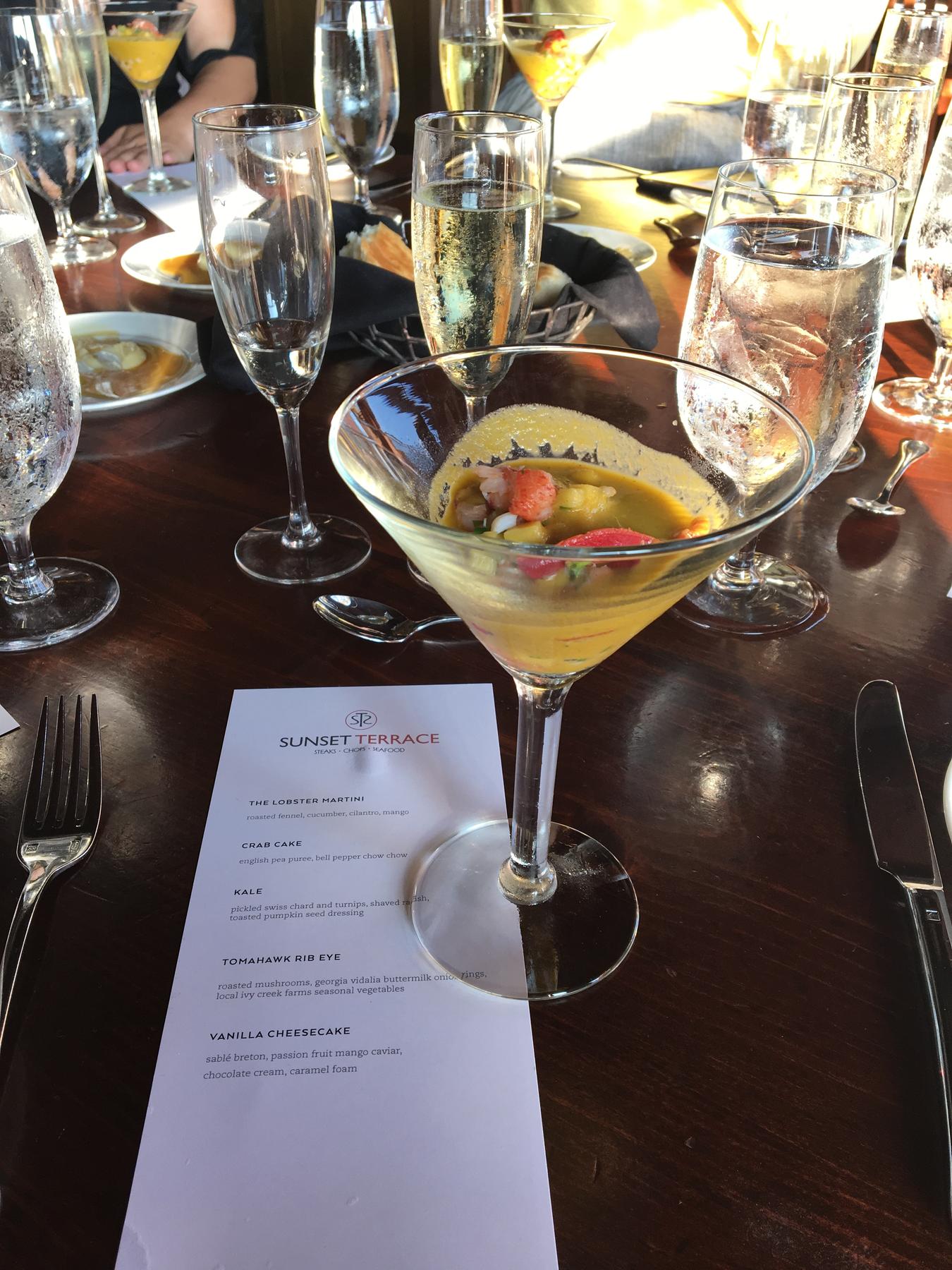 The commitment to local ingredients is most apparent, however, in the hotel’s impressive range of restaurants, each with a distinct character, but all of which offer gorgeous western views across the mountains. Despite serving thousands of meals per week, the restaurants’ offerings are far from typical large-scale food service fare. Quite the opposite: the chefs at the Grove Park Inn quickly and proudly point out that they are the sole client of a dozen area farms that bring meat and produce to the hotel’s tables. In fact, at the popular EDISON Craft Ales + Kitchen, nearly 90 percent of the menu is locally sourced; the list of purveyors doesn’t cite anything farther away than neighboring Georgia.

If that’s not quite local enough for you, the hotel can offer guests a “No Taste Like Home” wild food adventure. Expert forager Alan Muskat takes small groups on walks in the forests and fields surrounding the resort and points out the wild delicacies hiding in plain sight; participants can then turn over their harvest to the chefs at the hotel’s Vue 1913 restaurant to be incorporated in an elegant and inventive dinner. 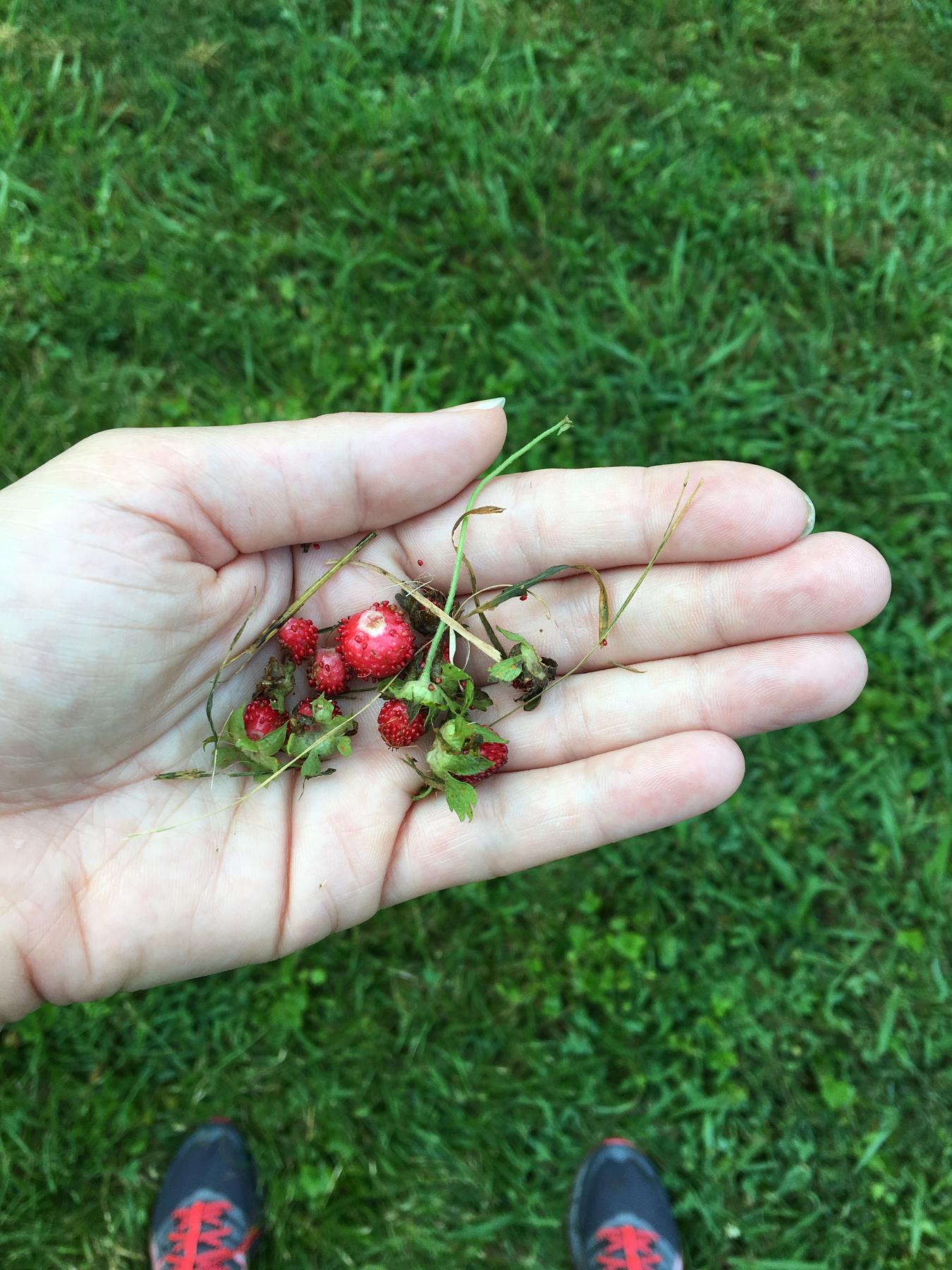 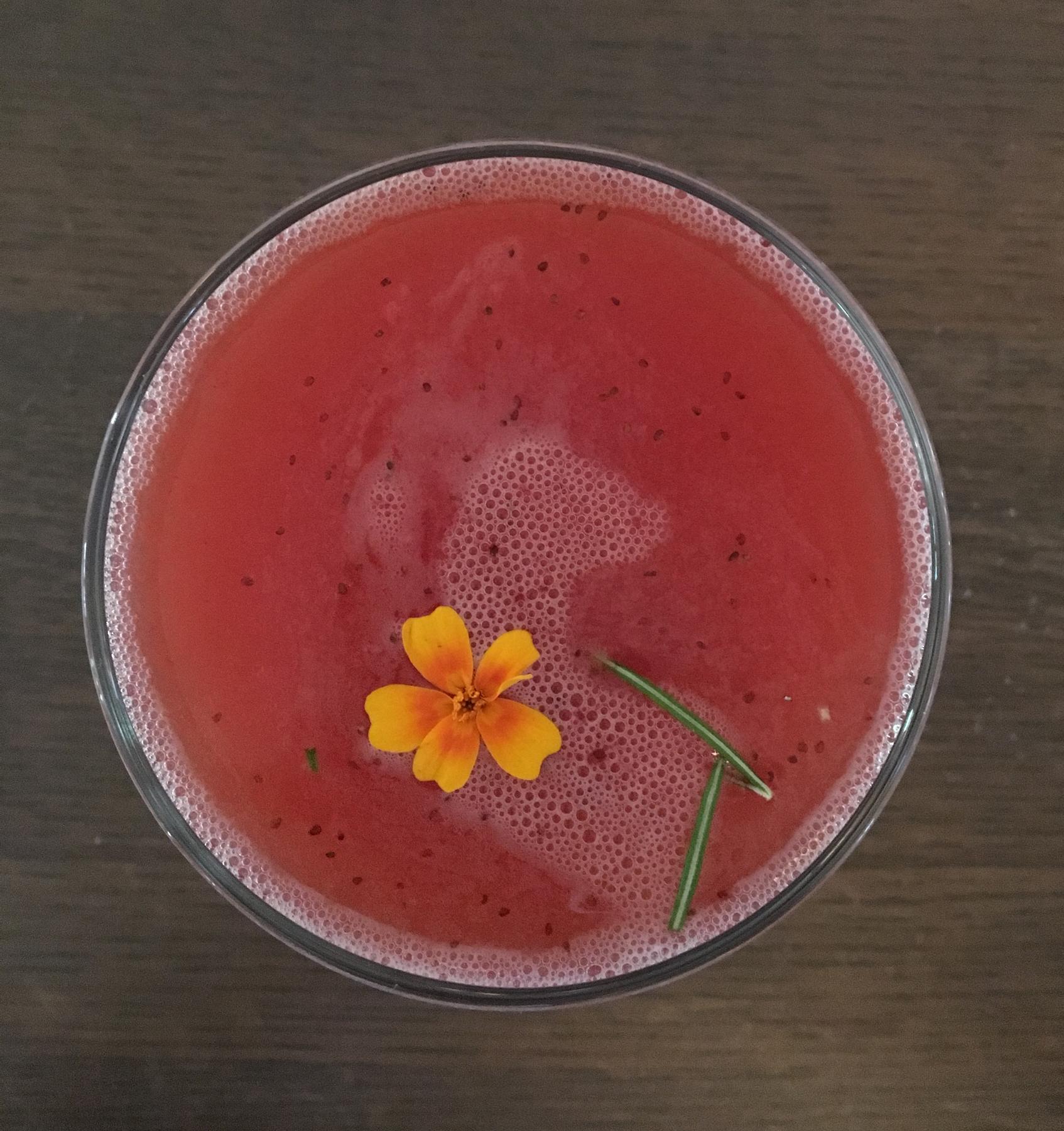 Between the restaurants, spa, shops, outdoor activities, and numerous daily and seasonal events, it would be easy (and fun!) to while away your entire vacation on the hotel’s property. But doing that would mean missing out on exploring one of the South’s most charming cities.

Even though it’s home to fewer than 100,000 people, Asheville has an outsize personality. This small city, set just off the famed Blue Ridge Parkway, has come to mean many things to many people. For some, it symbolizes the fin de siècle opulence of the Biltmore House; for others, the earlier history of the Cherokee Nation. Lovers of literature barely have to squint to see the thinly fictionalized Catawba of Thomas Wolfe’s masterpiece, Look Homeward, Angel. Modern art connoisseurs are drawn to the area by the history of neighboring Black Mountain College, which in the first half of the 20th century nurtured the careers of luminaries such as Jasper Johns, Robert Rauschenberg, Willem and Elaine de Kooning, Josef and Anni Albers, Cy Twombly, Merce Cunningham, and John Cage.

And, needless to say, outdoor enthusiasts will find no end of options for fresh-air adventure in the Asheville area, from hiking and camping to white-water rafting and mountain biking to skiing. One special way to enjoy the breathtaking mountain scenery is to spend a day with Navitat Canopy Adventures. Far more than just an adrenaline-fueled zipline experience (although flying nearly 400 feet above the ground at speeds up to 65 miles per hour will get just about anyone’s heart racing), a tour with this company will pair you with knowledgeable guides who will tell you about the natural history of the region, whose biodiversity rivals that of the Amazon basin. 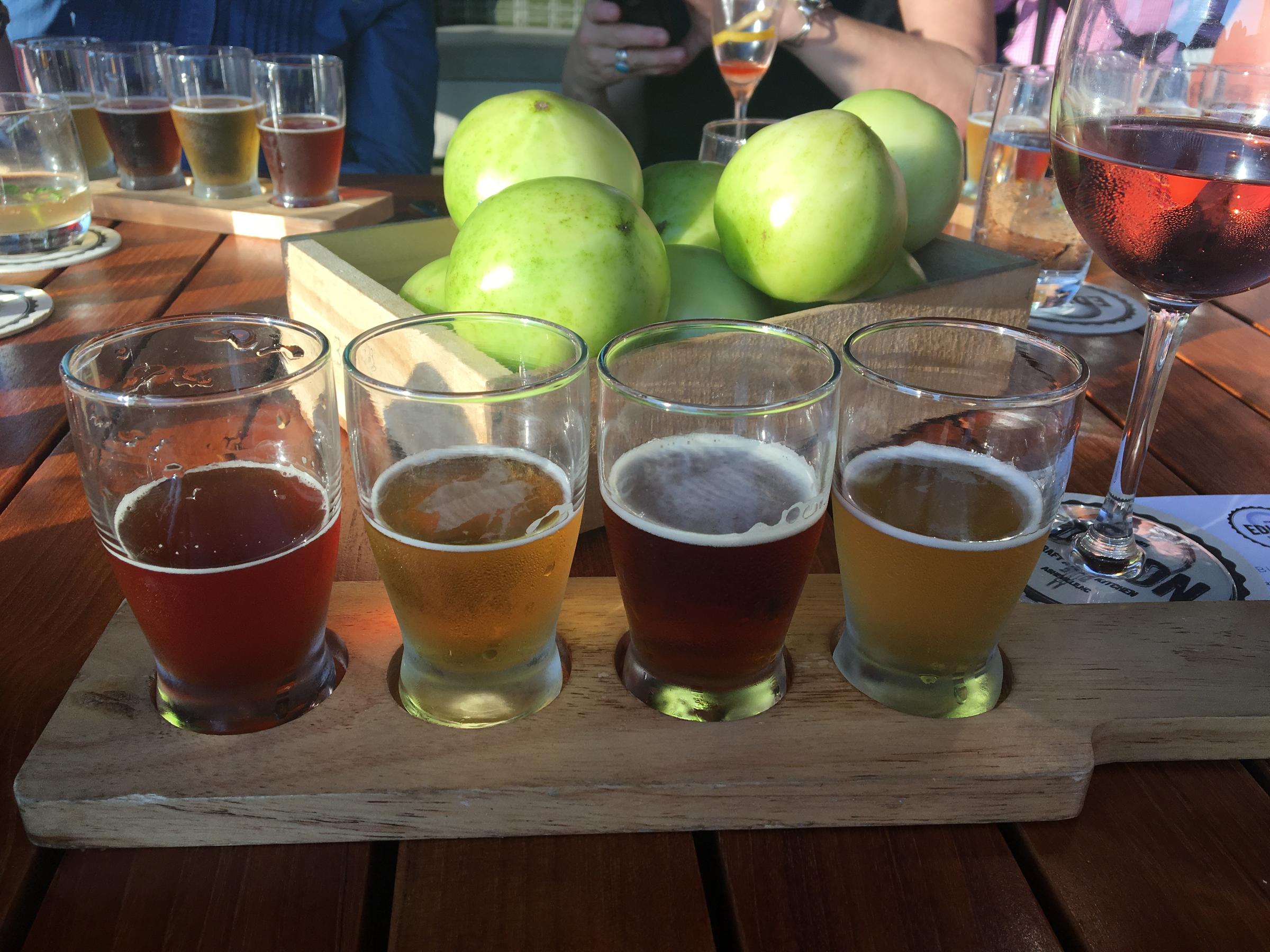 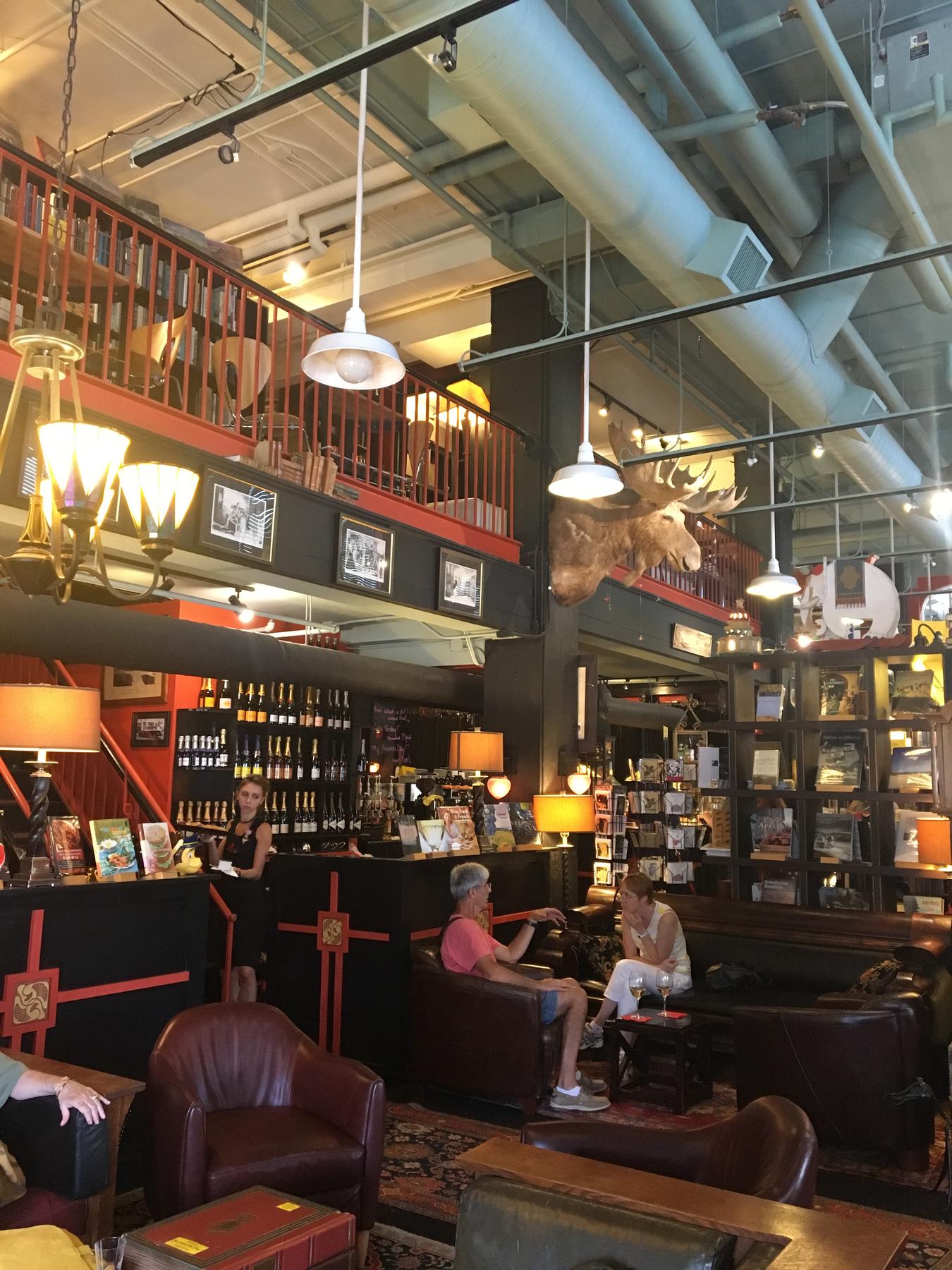 Asheville’s compact, walkable downtown offers diverse and sophisticated cultural, dining, retail, and nightlife options. Although Black Mountain College closed in 1957, you can revisit its legacy in a gallery and arts center on Broadway. Foodies will note that the locavore ethos pervades the city’s thriving dining scene. One shining example is the spare, elegant Table Asheville, where chef Jacob Sessoms changes his menu daily to take advantage of the freshest local, seasonal ingredients. Beer lovers will find nirvana in the city’s 60+ craft breweries, most of which offer tours and tastings; several companies also organize tours of multiple breweries, in case you’d rather have a designated driver. If you find yourself musing what a shame it is that more high-end used bookstores don’t serve cocktails, the Battery Park Book Exchange & Champagne Bar will be your new home away from home. Numerous boutiques and galleries sell clothing, pottery, art, and home décor made by local artisans. In addition, the Grove Arcade hosts a daily artists’ market where you can find the perfect one-of-a-kind memento for your trip. And you’re up for some live music after a day of sightseeing and adventure, venues from tiny cafes to full-size arenas will cater to nearly every taste and genre. Two of the better-known places to catch a show include the midsize Thomas Wolfe Auditorium at the U.S. Cellular Center (upcoming acts include indie darlings Sylvan Esso and The Head and the Heart) and the tiny Mothlight.

The two titans of Asheville’s lodging scene are the Omni Grove Park Inn and the Inn on Biltmore Estate, but a wide range of accommodations will suit all tastes and budgets; notable among these are the historic Reynolds Mansion and the newer Windsor Hotel.

Asheville may be tucked high up in the forests and mountains, but it’s well served by its bustling little airport, ranked as one of the best-connected regional airports in the country. It’s also an easy and scenic day’s drive from many of the South’s larger cities.