AMC’s Mad Men has inspired more than just skinny ties and retro dresses; it seems that the show has reminded the hotel and restaurant industries of one old-school nicety we’ve been forced to go without for too long—the classic bar cart. Four-wheeled stations are cropping up here and there in various incarnations; some come laden with sweets, some offer a range of cheeses, and others hawk a selection of booze.

Because who doesn’t love a good bar cart? 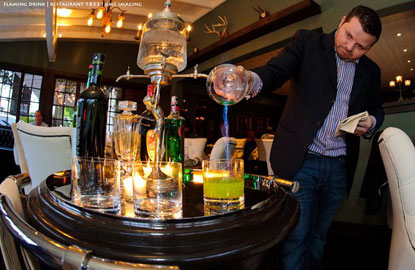 The James Beard-nominated Restaurant 1833 is high on Absinthe. The formerly illegal liquor comes on a cart loaded with up to 20 different brands (from places as diverse as Spain, Switzerland, and San Francisco), antique fountains, and slotted spoons. The restaurant lights the Absinthe, pours it aflame into orange juice, and then cover the glass with a napkin to trap in the vapors to inhale later. And if the "green fairy" starts to make you hunrgy, try pairing an Absinthe cocktail with one of the small bites or appetizers, like the bacon cheddar biscuits with maple chili butter or the crispy hen egg atop prosciutto and asparagus. 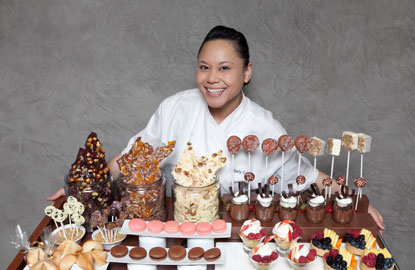 Sweet tooths will rejoice at WP24 (inside downtown LA’s Ritz Carlton) pastry chef Sally Camacho’s tantalizing cart covered in sugary treats. The seasonal and Chinese-influenced desserts, like the Green Tea Baba dressed with rum and apricots, and the Peach Umai featuring an intriguing combination of roasted peach, hojicha ice cream, and star anise doughnuts, are especially seductive when pushed around on a cart—a nod to traditional dim sum perhaps? 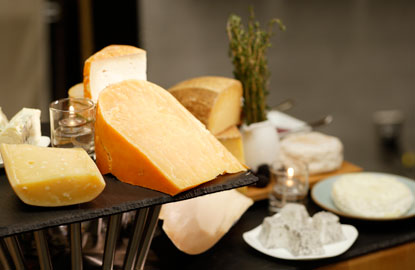 This Pacific Northwest steakhouse isn’t your usual testosterone driven venture. Urban Farmer focuses on locally sourced ingredients and meat with a nod to farmhouse dining, hence the 20 ft. communal table made from an old Douglas Fir. After dinner, wrap up with chef Matt Christianson’s cheese cart, featuring 8 to 14 selections that vary each season. Of course, many of the cheeses come from local purveyors as do the accompaniments, like lemon thyme and peach preserves, Oregon truffle honey, vanilla kumquats, and house-made quince paste.

Chef Daniel Humm’s gastronomic hotspot, NoMad, is only gaining steam into the late summer. After a couple delightful courses—on a recent lunch venture the black bass slow-cooked and served with puree of summer squash was outstanding—go for the dessert cart. The enticing display is pushed around the skylight-lit dining room, and includes macarons and the deceptively simple lemon custard with ricotta and shortbread.

Brilliant idea: offer drinks in the crucial hours between après beach and dinnertime. Such was thinking, anyway, behind Soho Beach House’s "One While Changing" program. A dapper bartender will stop by your room with an Art Deco bar cart to mix the cocktail of your choosing at $14 a pop.

Spotted by Jaunted while Down Under, Air New Zealand’s lounge in the international terminal of Sydney’s airport has ballpark charm to spare. For a bite in-between flights, help yourself to your own hot dog plus all the fixings.