News Nicole Brewer The Dating (Mis)Adventures of a Single Black Woman in the Middle East
Home  >  News   >   Raving Over Ruins: Europe’s Best Vestiges of the Past

Raving Over Ruins: Europe’s Best Vestiges of the Past 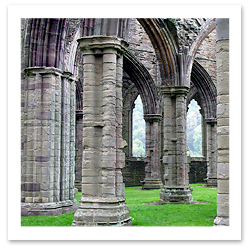 Europe is chock-full of fascinating ruins, so many of them one would be hard-pressed to count them all. A popular thread on our Talk Forums, Europe’s Most Evocative Ruins, reveals just how various Europe’s ruins are, and how enigmatic each one can be when encountered under just the right circumstances. Read on, and then share your own close encounter with vestiges of the past.

Tintern Abbey
Wales
When Wordsworth penned “Lines Written a Few Miles Above Tintern Abbey,” he had no idea of the number of people who would eventually flock to Tintern to gaze at the abbey’s ruins. Remote and hauntingly beautiful, the abbey is best seen early or late in the day to appreciate its complex stonework and tracery. The abbey, 5 miles north of Chepstow and 30 miles northeast of Cardiff, is on the banks of the River Wye.
Perfect Pairing: Wales is famous for its male choirs; consider dropping in on a rehearsal or attending a recital at Llandaff Cathedral.
Word of Mouth from the Forums: “What are your favourite atmospheric, dramatic and evocative European ruins? My pick is Tintern Abbey. Seeing the ruins for the first time stirred my emotions — excruciatingly and hauntingly beautiful!” — travel2live 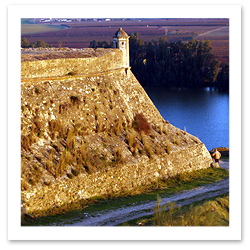 Juromenha Castle
Portugal
In much of Portugal’s Alentejo, you can’t drive far without seeing a castle or a fortress crowning one of the hills. Some, such as the castles at Estremoz and Alvito, have been restored and converted into luxurious posadas (inns). Others are open for you to clamber about their battlements. A walk up to one such ruin, Juromenha Castle, affords spectacular views of Upper Alentejo’s fertile and undulating fields.
Perfect Pairing: After a leisurely drive 33 miles south, walk the narrow, stone-surfaced streets of Monsarez. The friendly locals will point you towards Casa do Forno, a popular restaurant featuring a traditional menu with plenty of roasts. Picture windows line the dining room and afford a spectacular view over the rolling plains.
Word of Mouth from the Forums: “A place I had never heard of before. I went in August but felt like an explorer discovering the site: the ruined castle at Juromenha, overlooking the Guadiana River on the border with Spain.” — Nikki 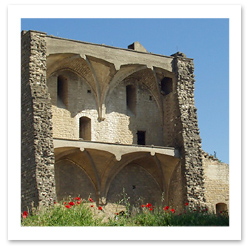 Chateauneuf-du-Pape
France
Though the chateau, a fortified summer house for the Avignon popes, was destroyed in the Wars of Religion, and its remaining donjon (keep) blasted by the Germans in World War II, it still commands a magnificent position. From this rise in the rolling vineyards, you can enjoy wraparound views of Avignon, the Luberon, and Mont Ventoux.
Perfect Pairing: Learn about local wine production at the Musée du Vin Caveau Brotte Père Anselme, a private collection of tools and equipment displayed in the caveau (wine cellar) of the Brotte family. From there, drop into one of the many caves de dégustation (wine-tasting cellars) that pepper the village streets.
Word of Mouth from the Forums: “There isn’t much left to the castle of the Avignon Popes, but it gives you an idea of the turmoil of the era. It sits on a rise, overlooking the surrounding vineyards that made the region famous.” — MadameX 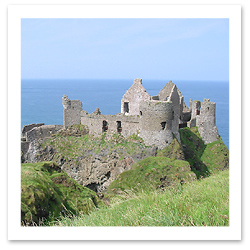 Dunluce Castle
Northern Ireland
Halfway between Portrush and the Giant’s Causeway, dramatically perched on a cliff at land’s end, is roofless Dunluce Castle, a 13th-century Norman fortress. Its history is checkered with unfortunate events — in 1639 a poorly constructed kitchen plummeted (with the cooks) into the sea below, and in 1857 a shipwreck could be seen by castle dwellers from the terraced gardens. Exhibits at the castle detail the shipwreck.
Perfect Pairing: Tour Bushmills, reputedly the oldest licensed distillery in the world, to discover the secrets of the special water from St. Columb’s Mill and the story behind malted Irish barley. The tour concludes with the much-anticipated, complimentary shot of uise beatha, or the “water of life.”
Word of Mouth from the Forums: “On Northern Ireland’s coast is Dunluce Castle ruins — eerie, especially on a fog filled morning. Makes one want to rush into nearby Bushmills for a pick-me-up taste!” — tower 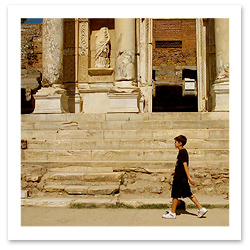 Ephesus
Turkey
These remarkably preserved ruins at Ephesus were rediscovered in the late 1800s; excavations have been going on for nearly a century. The site is a pleasure to explore: marble-paved streets with grooves made by chariot wheels lead past partially reconstructed buildings and monuments. The remains are especially appealing off-season, when the place can seem deserted.
Perfect Pairing: Rent one of Nisanyan Evleri’s five independent stone cottages on the outskirts of the nearby village of Sirince. The cottages are short on modern conveniences inside but share a swimming pool and a lovely garden.
Word of Mouth from the Forums: “Ephesus! Wow! I was also surprised to find Aphrodisias and Pergamon quite wonderful in western Turkey. We have seen lots of ruins, but Turkey’s abundance in this area blew us away.” — WTnow 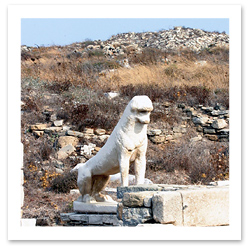 A 25-minute caique ride southwest from Mykonos, Delos was the political and religious center of the Aegean. Shielded on three sides by other islands, the islet provided the safest anchorage for vessels sailing between the mainland and the shores of Asia. In 1972, the French School of Archaeology began excavating on Delos, a massive project considering that much of the island is covered in ruins. The work continues today.
Perfect Pairing: End your day’s discovery with dinner at La Maison de Catherine on Mykonos. This hidden restaurant’s Greek and French cuisine and hospitality are worth the search.
Word of Mouth from the Forums: “Having just been there in Sept., I think the Greek island of Delos is fascinating. I sat and just tried to imagine what life was like 3000 years ago.” — MarthaT